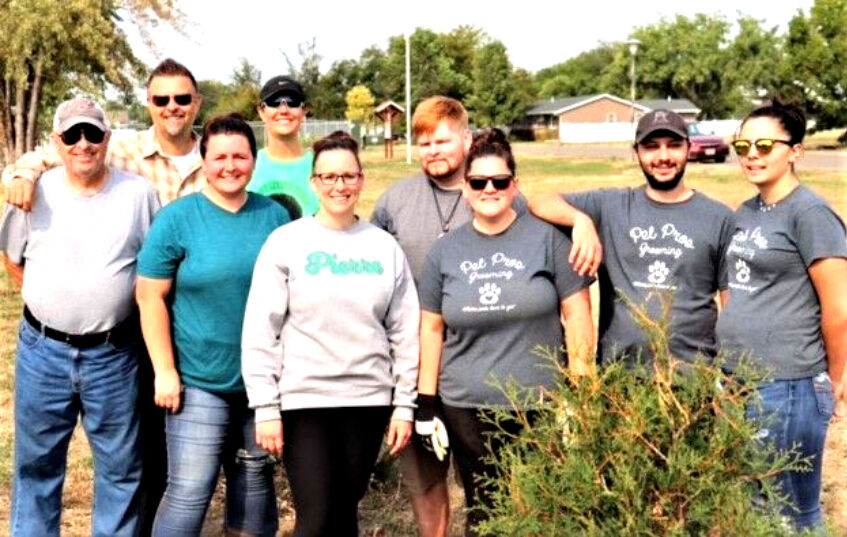 Shown are some of the volunteers who planted donated trees on the border of the future Pierre Dog Park. Sixteen trees are planted, but there are at least 32 more to go as donations come in. Then the fencing and other aspects of the park will be worked on. 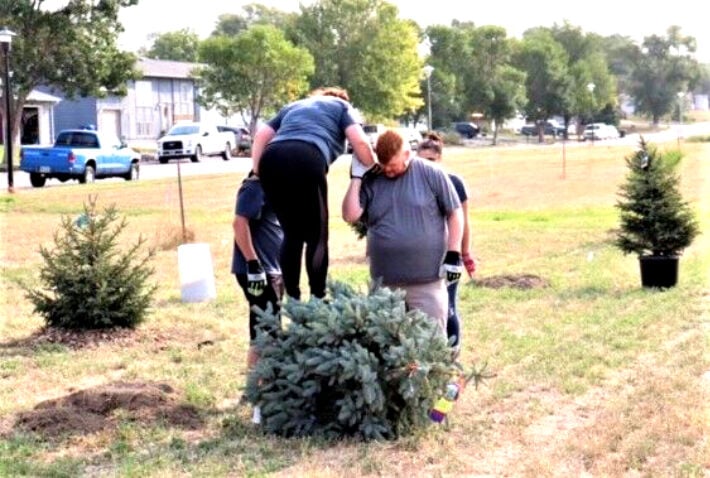 Volunteers spent Sept. 19 planting trees along what will be the periphery of the future Pierre Dog Park. Shown is the de-potting of a tree and the loosening of the roots before planting.

Shown are some of the volunteers who planted donated trees on the border of the future Pierre Dog Park. Sixteen trees are planted, but there are at least 32 more to go as donations come in. Then the fencing and other aspects of the park will be worked on.

Volunteers spent Sept. 19 planting trees along what will be the periphery of the future Pierre Dog Park. Shown is the de-potting of a tree and the loosening of the roots before planting.

For years, a fenced-in dog park in Pierre has been in the works. In July 2019, the city commission unanimously approved the park location at a current alfalfa field on East Sully Avenue, a few blocks east of Downs Marina. Now, trees have been planted along the future border in beginning preparation for the rest of the park, as donations are raised.

“On Saturday morning, we had a great bunch of volunteers to basically ‘break ground’ at the future site of the Pierre Dog Park,” said Guy Ferris, member of the dog park subcommittee. “The group was made up of several groomers from Pet Pros, a couple of city park board members, a city employee and a real estate agent, plus friends/family. A total of 16 trees from East Pierre Garden Center were planted, with more to come — hopefully soon.”

“The Dog Park fundraising has taken a big slow down since the (COVID-19) pandemic hit in March,” Ferris said. “The park is in desperate need of funds for fencing, lights, water fountains, etc. Many people are super excited to get their pets out running freely and safely. To donate, please stop by the Main Street Bankwest or ask a local Realtor how you can help.”

The cost for the trees ranges from $165 to $200 each, depending on the types and their potential shade-creating sizes. Ferris said the first 16 trees just planted are basically spruce trees. Plans are for another 20 shade trees to be added to the periphery, outside the future fencing. “Another dozen will be within the park’s fenced-in area,” Ferris said. “The trees are being purchased through East Pierre Garden Landscaping. The cost of the tree also includes deer protection and irrigation.”

Based on the preliminary vision, the dog park would include a parking lot, a fenced entrance space where dogs could be unleashed without fear of them running off, and two internal divisions: One for large dogs,and one for smaller dogs. All these areas, as well as the dog park as a whole, would likely be cordoned off with chain-link fence, Howard said. Artificial lighting has been added to the wish list.

Realtors in Pierre and Fort Pierre had helped further the push for the creation of a dog park in Pierre. Among the many other benefits, a dog park is something that may move people to move here.

“(Dog parks) are common around the state, and certainly in major municipalities. We’d like to join that list,” said Dr. Craig Howard, a veterinarian and member of the sub-committee. He said they selected this location due its size, pre-existing ownership by the city, and proximity to a potable water source, among other criteria. “We entertained a few other sites, but this site rose to the top to the point that we don’t have an alternate site,” Howard said.

Tom Farnsworth, director of the city’s Parks and Recreation Department, said that the idea of a dog park was presented to the Commission board about three years earlier. Farnsworth also pushed for the dog park.

“The Central Board thought that a dog park was something missing from our communities. As realtors, we often show people who are considering a move to Pierre around town and introduce them to our many wonderful amenities. We get asked about dog parks quite frequently, and it was something we were missing,” said subcommittee member Halli Holden-Wright. “Once the tree fundraiser is complete, we will begin fundraising for fencing material. Anyone who purchases a tree or donates to this project in any way will be recognized on our Park Kiosk that will be installed once the park is complete.”

The Pierre City Commission, during its July 2019 meeting, heard lengthy testimony concerning the location of the future fenced-in dog park. The meeting room was more than packed with proponents and some opponents. The debate was not if there should be a park; one would be a boon to the community. The debate focused on where the park should be located— before any design, costs, or construction were to be considered.

Those favoring the park spent considerable time and effort picking a spot that had acceptable size (at least an acre), a residential buffer (minimal impact on the neighborhood), a water source (most likely city water), and availability for humans of parking, shade and restrooms. Their preference was a city-owned, park-zoned, field south of East Sully Drive in the southeastern part of Pierre. It is next to the Community Orchard, which is run by the Girl Scouts.

Meanwhile, homeowners on the north side of this street feared the possible noise of dogs and traffic, worries about children versus escaped or otherwise uncontrolled dogs, people partying in the open parking lot, loss of their open-field southerly view, turkey and deer no longer visiting the field and commercially-purchased signage going up on any fences.

However, discussion was fairly well shut down when the commission called on a newly acquired resident professional: Thomas Moore had been, for then a little over a month, the city’s new superintendent of park operations.

“I have experience with three different cities putting in dog parks. It is important to listen to people, and this is only the start. The pros are not nearly as high, and the cons are not as hard as you think,” he said.”Each side will realize more of a common ground (when a park exists).” He then added, “This is one of the best locations I have seen. Socialize dogs and socialize with people; it’s only a win/win situation.”

The commission voted, unanimously, to approve the location.