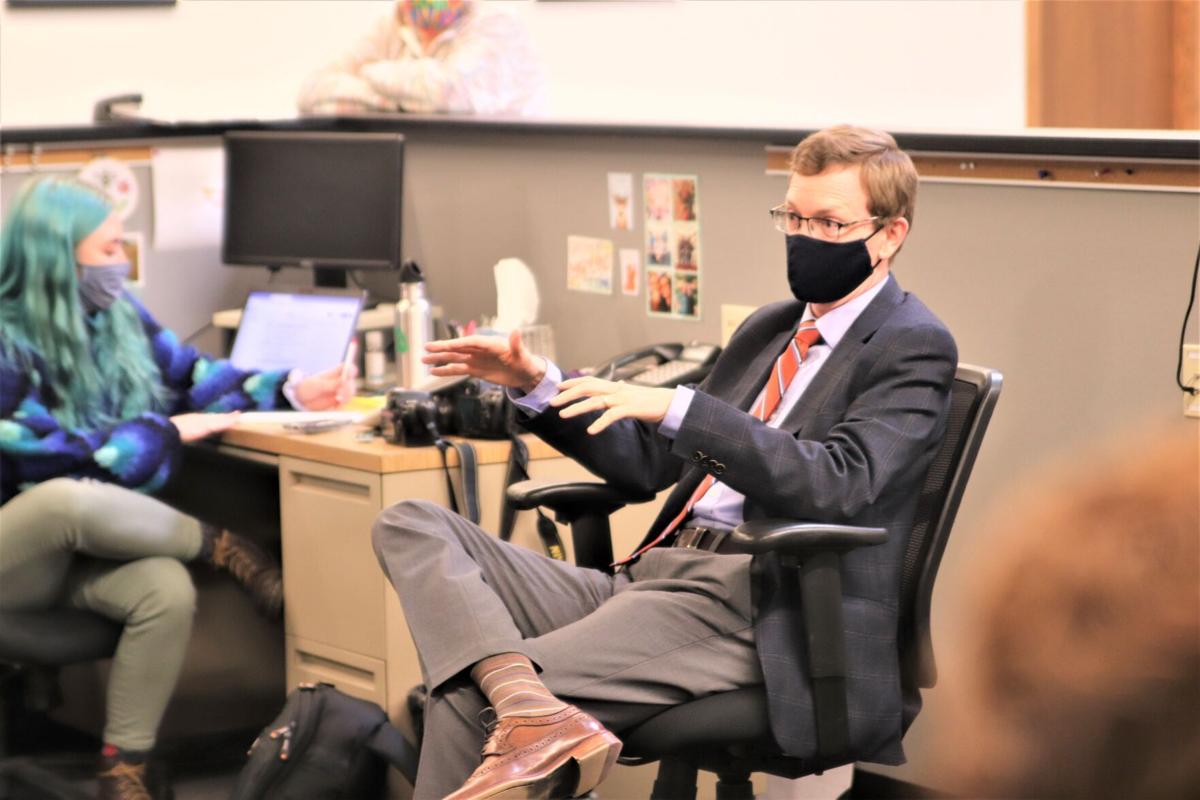 Rep. Dusty Johnson (R-SD) speaks to staff of the Capital Journal newspaper in Pierre. At left is reporter Abby Wargo. 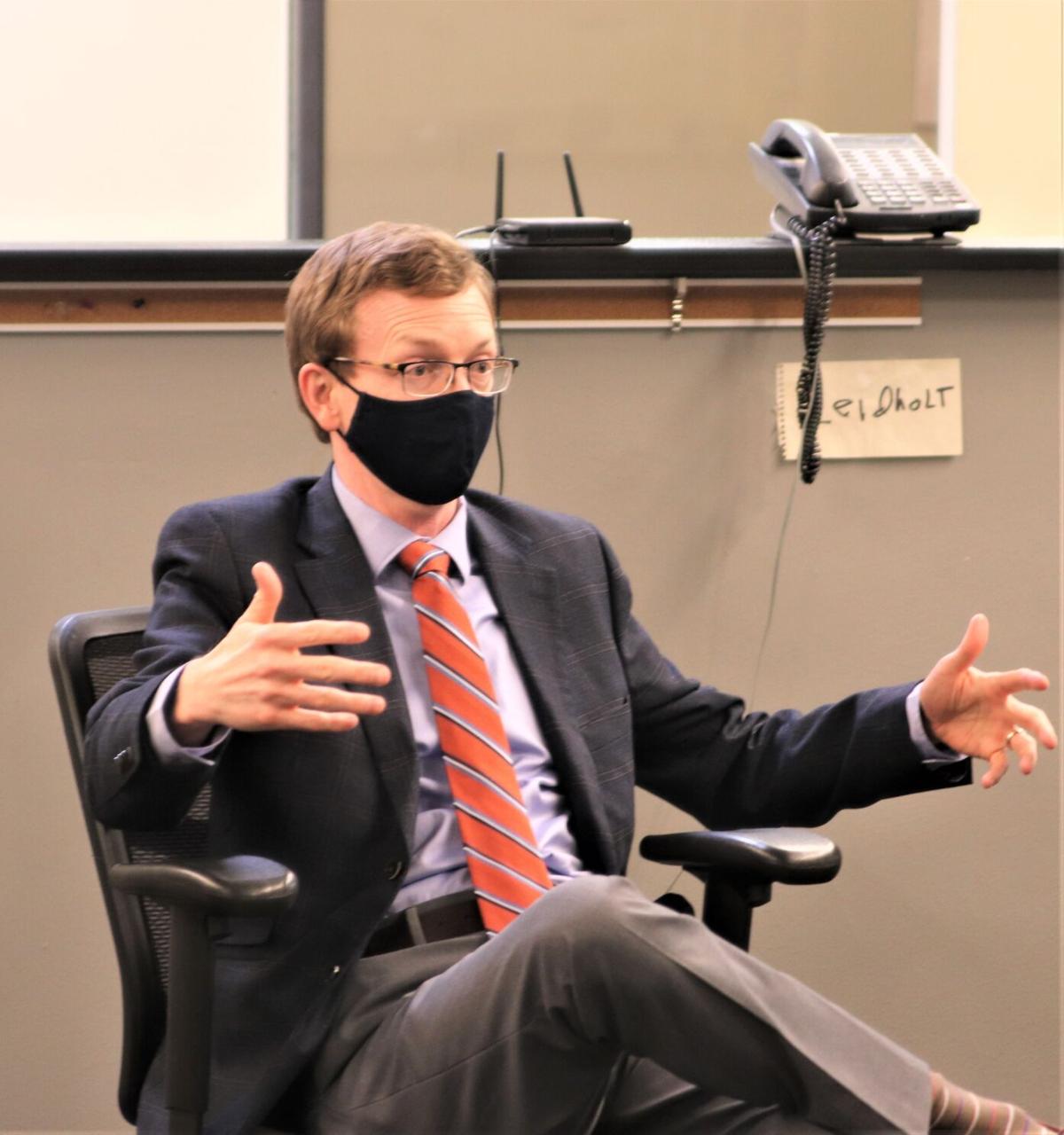 Rep. Dusty Johnson (R-SD) speaks to staff of the Capital Journal newspaper in Pierre. At left is reporter Abby Wargo.

In a wide-ranging interview with the Capital Journal staff, Johnson, a Republican, said no president should have the power to end a project as Biden did.

“There should not be a presidential permit system, especially since it does not involve the House or Senate, and it does not have to play by the same rules,” he said. The $8 billion pipeline went through a long process to approval and that should stand, Johnson said.

“I am not giving up, but you can’t get a party to directly go against its new leader,” he said.

He noted the decision, which could mean the end of the project, cost hundreds of jobs, many of those temporary construction workers. But, he noted, it also affected other jobs tied to support for the project and the workers, including many in South Dakota. On other topics:

Getting alongJohnson is part of the four-year-old Problem Solvers Caucus, about 60 members of both parties looking for common ground on key issues. The caucus’ aim is to champion ideas that appeal to a broad spectrum of people, using common-sense solutions and trying to break through the gridlock of today’s politics.

National debtThe national debt is just under $28 trillion and growing. Congress passed more than $4 trillion in COVID-19 relief last year and is looking at another $1.9 trillion.

“First, make sure you understand that I universally supported assistance packages with the COVID pandemic, but it is out of proportion with the rest of the country,” Johnson said.

How do we chip away at the debt?

“Cutting waste, fraud and abuse — though needed — won’t fix the budget,” Johnson said. “Raising taxes on the rich will not put a dent in the problem. We do need some specific investments in the country such as Medicare, Medicaid, defense and others, but you don’t get to pick and choose which ones get cuts. They all have to be looked at to address the debt.”

He said the answer will be somewhere between the Republicans’ penchant to cut and the Democrats’ tendency to tax.

He said moves such as increasing the eligibility age for Social Security could come into play. He also acknowledged that some people are getting bigger handouts from the government than if they were working.

“That is certainly consistent with what I’ve heard myself,” Johnson said “We need a safety net for those who truly need it, but I’m a big fan of work requirements. The disabled, young children as dependents at home, anybody over 50 … but a 30-year-old able-bodied person I don’t know why you don’t work.”

“My first 24 months in office were rewarding. The last two months have been more difficult, and the terribleness of Jan. 6 did not help,” he said. “Since then, many were hopeful, but the new president’s call for unity has not manifested itself. Collegiality is at an all-time low in Congress.”

He said former President Trump’s influence on the Republican Party remains to be seen.

“The parties are always in a sense of re-identification. The Democrats will go through more soul-searching because so many of their incumbents lost the last election, while not a single Congressional Republican incumbent lost theirs. opining on the reasons Trump lost does no good for the Republicans,” he said.

“Last year’s (federal) infrastructure bill was kind of a historic disappointment,” he said. “It was overwhelming against what should be done — good stewardship includes upkeep of the infrastructure.”

The Democratic-led House passed a $1.5 trillion infrastructure bill last summer that went nowhere. Infrastructure — roads, bridges, airports — is shaping up to be a hot topic in 2021.

Johnson said many states have increased their gas tax to shore up infrastructure. “We needed to, to keep up with inflation,” he said. As for South Dakota, “Our roads are in pretty good shape, but our bridges need attention. Even with that, our state is fairly well run compared with the rest of the country.”

Johnson said Washington, D.C., doesn’t meet either of the historic standards for statehood: At least 6 million residents or 10,000 square miles.

Lsat month, Johnson reintroduced the District of Columbia-Maryland Reunion Act, which would revert the majority of Washington, D.C., suburbs to the state of Maryland.

“I don’t know what flavor those (Biden’s gun proposals) will take,” he said “I have been opposed to those restrictions in the past. Activists are interested in fear and anger, and the most extreme ideas that just won’t pass. We need to speak in reasonable and more pragmatic tones, not along with anti-gun or extreme gun-rights activists. There are other less-shiny gun issues to be addressed.”

“Newspapers are not not what they once were, but still, other than the governor, nobody can decide what information goes to the community more than newspapers. I believe in the Fourth Estate, in print journalism. Journalism matters. The true-believing are advocates of journalism.”

He said he bristled at Trump’s assertion that “fake news” dominated the industry.

“I have every time disclaimed the phrase ‘fake news.’ I am so disappointed that facts that should matter are being lost to the side issues and to tweets. I, and we, must try to keep things headed in the right direction. Cable news and social media are on one end and the printed news is on the other end. It’s a structured way that supports newspapers.”