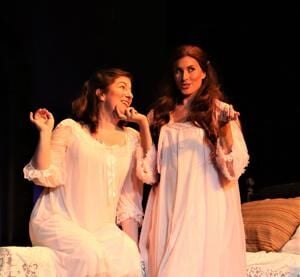 Shown is a scene from last season's Pierre Players "Dracula" in the Grand Opera House in Pierre. 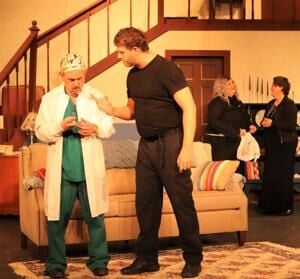 Shown is a scene from last season's Pierre Players "Arsenic and Old Lace" in the Grand Opera House in Pierre.

Shown is a scene from a previous Pierre Players performance of "Born Yesterday" in the Grand Opera House in Pierre.

Shown is a scene from last season's Pierre Players "Dracula" in the Grand Opera House in Pierre.

Shown is a scene from last season's Pierre Players "Arsenic and Old Lace" in the Grand Opera House in Pierre.

Shown is a scene from a previous Pierre Players performance of "Born Yesterday" in the Grand Opera House in Pierre.

South Dakota’s mostly nonprofit theater industry has been devastated by the COVID-19 pandemic, which has forced the cancellations of stage plays, events and concerts across the state, resulting in millions of dollars worth of lost revenue, staff layoffs and ongoing budget cuts.

The financial losses have raised fears that some theater groups may not survive the pandemic or will return in a weakened condition, and that as a result, South Dakota communities and residents will lose access to attending or performing in artistic and creative endeavors that are part of a healthy and thriving society.

So far, many community theater groups have persevered through the pandemic thanks to federally funded relief grants and reserve funds. But such assistance programs are running out of money and financial losses are mounting.

The South Dakota Arts Council, the state agency that oversees and funds the arts, has been able to fill in at least some of the financial gaps left by the pandemic. As part of the federal pandemic relief package, known as the CARES Act, the arts council has been given $422,800 to disperse as needed, said Deputy Director Rebecca Cruse.

The money is being distributed as emergency assistance grants to organizations in the most dire need and to create Residencies for Recovery, a program that places artists in communities that need help recovering from the pandemic. The grants haven’t been awarded just yet, Cruse said, but the council expects to spread the money between 68 organizations. Each organization’s award will be based on its pre-pandemic annual budget, but would amount to only $6,200 per group if divided equally.

Still, Speirs and other leaders in the arts community worry that the pandemic may cause irrevocable damage to arts organizations which, in turn, would cause great harm to the communities, artists and economies they serve.

A 2012 report by Americans for the Arts found that non-profit arts and cultural events, such as concerts, theater productions and artistic festivals, attracted an estimated 3.3 million people to South Dakota and generated almost $97 million in spending in 2010.

“We stand to lose who we are in South Dakota without the arts,” Speirs said. “The arts are a reflection of our society. The arts tell our story. The arts reflect our feelings. The arts help us celebrate, help us mourn, help us gather as a community. If we didn’t have the creative community in South Dakota, we wouldn’t know our home. They make our communities who they are.”

Theater, by its nature, requires close personal contact, whether between the actors on stage or the audience members packed elbow to elbow in their seats. In many ways, it is the close contact between everyone involved that makes live theater a unique, visceral experience. But close contact during a pandemic is also dangerous. Most theater organizations in South Dakota recognized the danger to their casts and crews and shut down voluntarily.

The Black Hills Playhouse, a theater in Custer State Park, expected to celebrate its 75th season of performances in 2020 but was forced for the first time in its history to cancel its four-play summer season. The organization expects to fall $150,000 short in revenue in 2020 due to lost ticket sales, said Development Director Darla Drew.

The playhouse hires one of the state’s few professional theater companies each summer. The actors and technical crew come from all over the country to produce four main stage plays and help with educational events. The cast and crew live in dorms in Custer State Park and have regular interactions with the public, Drew said, so the risk of spreading COVID-19 was a big concern.

In Aberdeen, the fully restored Art Deco marquee on the Capitol Theatre on Main Street has not been used for its intended purpose. As of late July, the Aberdeen Community Theatre group had been mostly idle for almost five months due to the pandemic, said Managing Director James Walker.

“It’s been devastating,” said Walker. “I cannot tell you when we’ll be on the other side of this thing and when we’ll be able to actually do programming again.”

Not putting on shows creates a landslide of problems. Ticket sales are the driving force of the organization’s revenue. Without shows or ticket sales, the theater is drawing on the reserve fund the organization spent four decades building to pay for production overhead and utilities. Under current conditions, if enough costs can be cut, the organization should be able to keep itself afloat through November.

“After that, it’s going to be extremely difficult,” Walker said. “It’s not that we won’t be around at the end of that, I think we will, but it will be like starting from zero.”

Starting over would mean rebuilding programs such as senior theater and Young Persons Theater that residents of Aberdeen have come to rely on as a creative outlet, Walker said.

The show must go on

Deteriorating financial situations combined with the need to stay connected to their audiences and the desire to perform has community theater groups from Rapid City to Yankton planning to begin production schedules over the coming weeks. The first two weekends in August will see community theaters in Pierre, Mitchell, and Yankton open the first shows of what they hope will be full 2020-21 production seasons.

The past five months have not been easy for the Black Hills Community Theatre in Rapid City, but in late July, volunteers were excited about the prospect of staging another show after a long hiatus, said Executive Director Nick Johnson. The theater’s board of directors cancelled the final two productions of the 2019-20 season in March due to the pandemic. Ticket sales ended, all events were cancelled and theater revenues plunged.

Restarting production isn’t just about jump-starting the theater’s revenue stream. In fact, there’s a chance that staging a play, even a relatively simple one, could end up costing more money than it brings in. There is virtually no way to sell a ticket for every seat in a theater and maintain the six feet of separation that the Centers for Disease Control and Prevention recommend as a way to prevent spreading COVID-19. So, the number of tickets sold will probably need to be reduced.

Instead, the idea is to try to bring back in some fashion the unique experience of live theater both for audiences and for the volunteer actors and technical crew that have come to rely on the theater as an outlet for their creativity.

“The essential function we provide is just bringing people together,” Johnson said. “People want a creative outlet and they want to see creativity at work. And I think that’s exactly what we’re going to do.”