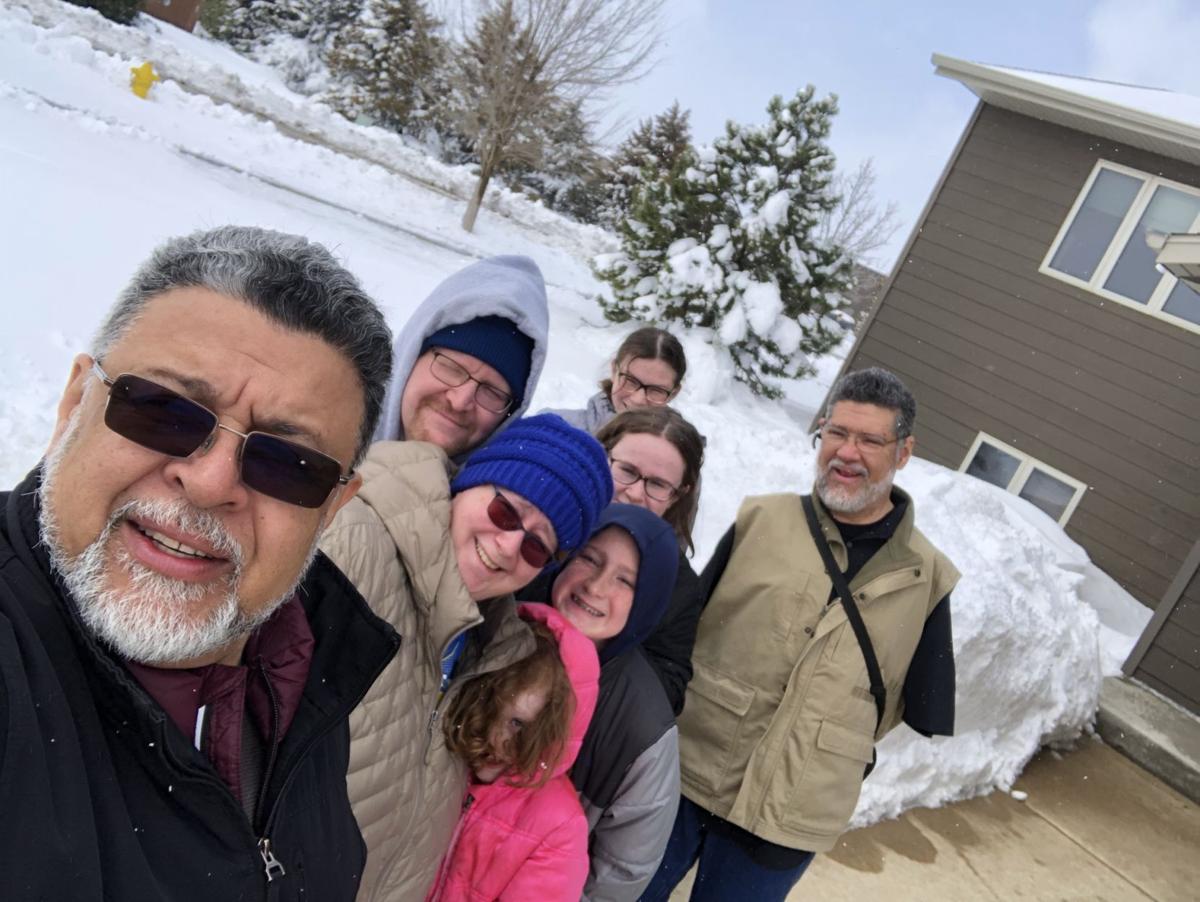 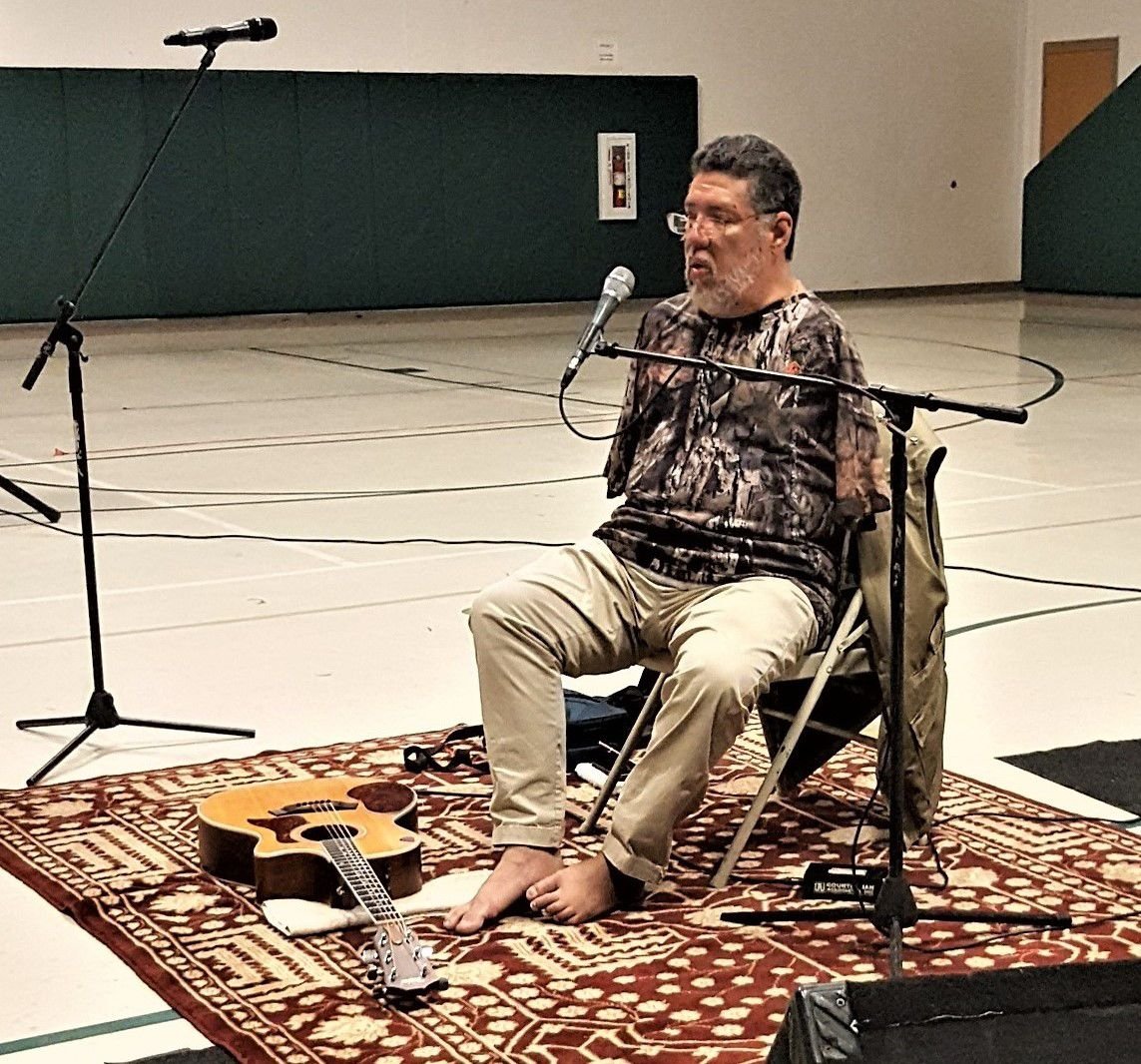 Tony Melendez set up in April 2019  for the assembly in St. Joseph's Catholic  school in Pierre that didn’t happen because of bad weather.

Tony Melendez set up in April 2019  for the assembly in St. Joseph's Catholic  school in Pierre that didn’t happen because of bad weather.

Guitarist, singer and composer Tony Melendez will give a free concert for the community Oct. 24 in the Riggs High School theater in Pierre. Melendez will first be featured as an inspirational speaker, during school and public assemblies at St. Joseph School and Pierre School District’s Georgia Morse Middle School.

Tony Melendez was born without arms.

Why is Melendez playing in Pierre? “I offered to coordinate the concert last year,” said Barb Stangeland, a parent of a St. Joseph student. The Stangelands moved to the Pierre area in 2017. “Through youth ministry, I have known Tony and his brother, Jose, for the last 25 years. He has become a family friend. We have hosted him in other school concerts.” His concert was originally set for last April, but was cancelled because of Winter Storm Wesley.

Why is Tony coming back to Pierre? “Tony was invited to Pierre last April to celebrate the end of the 60th school year at St. Joseph School. He is coming back now in October to fulfill that obligation because of the storm cancelling the concert.” The concert, a free-will offering, is to help the St. Joseph School’s tuition assistance fund.

What will Tony and Jose do while here? “Our family most likely will take them out to eat when they arrive on Tuesday evening. We are hoping to share with them some of our favorite places to visit here in town, such as the Donut Shop and Zesto. Any downtime will be spent catching up on each others lives. I will be taking the days off work to help them set up at St. Joseph School, Georgia Morse Middle School, the St. Peter and Paul Youth Event and the concert.

Is there anything Tony can’t do? “There are probably things Tony can’t do, but when spending time with him you don’t really notice it. Jose, his brother, has traveled with him most places. When he is not traveling, he has his wife Lynn and two adult children to help him. Tony can drive his adapted vehicle that he steers with his feet. He can dress himself. He will share with the students some of the things he does differently.”

Who may hear his inspirational speeches? “The assemblies are limited in space so they will be for GMMS and St. Joseph School students and staff. Anyone is welcome to the concert on Oct. 24 at 7 p.m. at Riggs High. Tony gives a concert that is appropriate for all ages.

What is Melendes’ story? According to Jose, Tony was born without arms and with a clubbed foot due to the drug, thalidomide. Their mother was prescribed this drug for morning sickness by her doctor. In his first year, Tony’s family immigrated from Nicaragua to the United States so Tony could have corrective surgery on his left foot in order for him to walk.

Tony learned to do almost everything with his feet. At 16, he taught himself to play the guitar. As he grew proficient at his guitar playing he also matured as a singer and composer. Now more than 31 years later, Tony has traveled to all 50 states and more than 44 foreign countries.

Tony and Jose together share with young and old their message of hope, encouragement and faith. They discuss self esteem, substance abuse, disability awareness, cultural awareness, bullying and family support.

Tony and his family live in Branson, Missouri. He has recorded six albums, Never Be The Same, Ways of The Wise, El Muro se Callo, Cup Of Life, Hands In Heaven and Hope/Esperanza! He also has published his autobiography, A Gift Of Hope.

Tony has earned special commendations from President Reagan, State of California, The City of Los Angeles, and many other civic and charitable organizations, as well as the Inspirational Hero Award from the NFL Alumni Association at Super Bowl XXIII in Miami.