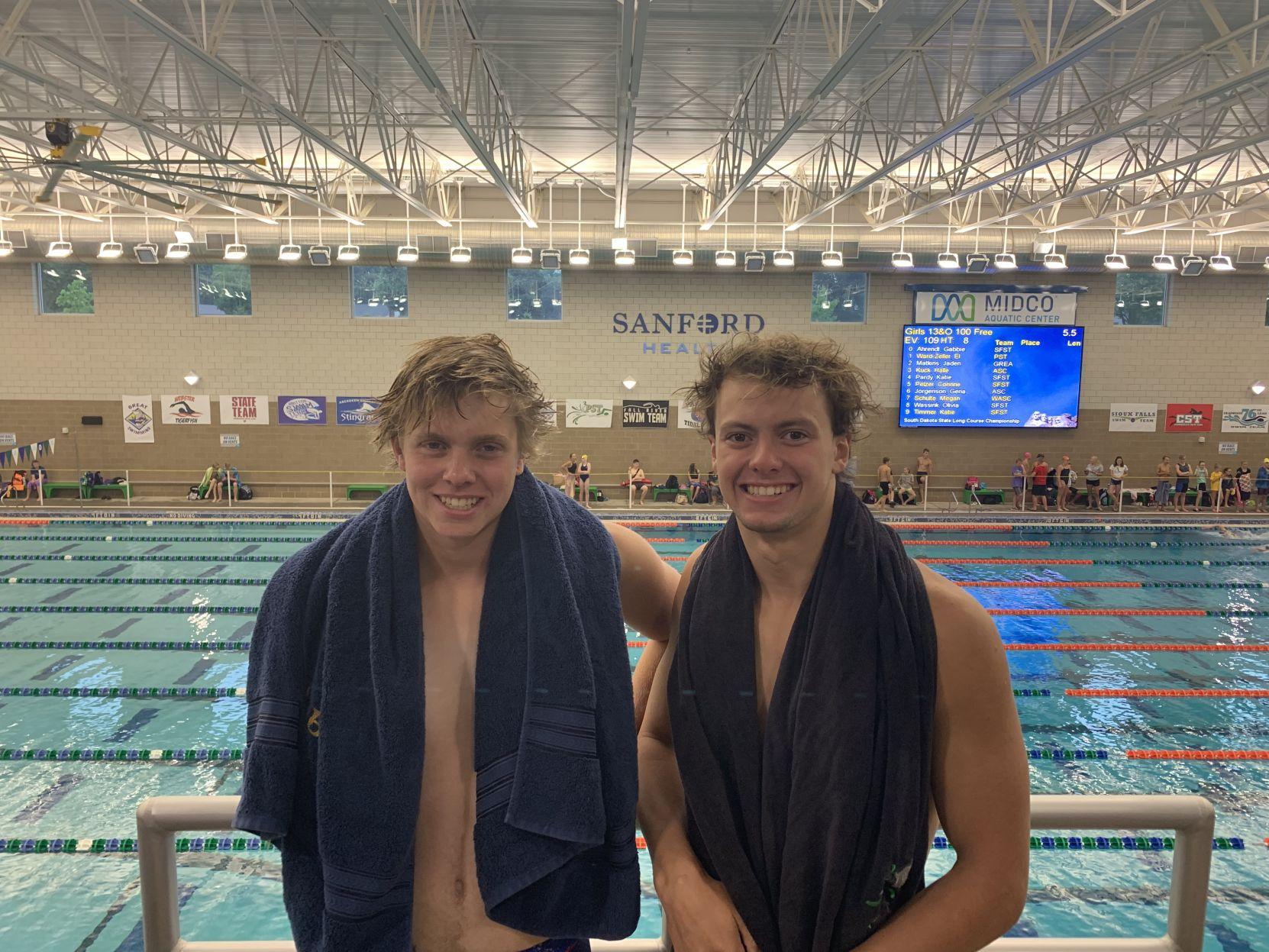 Nick Loe, left, and Caleb Huizenga competed in the boys 17-19 division in the State A Long Course Championships in Sioux Falls. Huizenga placed second in the 50 meter freestyle, while Loe placed first in the 100 and 200 meter breaststroke.

John Robert “JR” Mayer, 18, pleaded not guilty Wednesday, Aug. 28, in state court in Pierre to a felony count of possession of "shatter," a potent extract of marijuana. He was arrested around midnight Monday, July 29, by Pierre police on LaFramboise Island. His attorney, Russ Janklow, told retired Judge Thomas Trimble he was close to making a deal with prosecutors on the charge that could mean 5 years in prison. (Photo Hughes County Jail)

Police stopped John Mayer  minutes before midnight Monday, July 29 on LaFramboise Island in the Missouri River in Pierre on suspicion of under-age drinking and drug use.

By 12:40 a.m., Tuesday, Mayer, who turned 18 in January, was in the Hughes County Jail on expected charges of felony drug possession and five lesser charges, including underage drinking and using pot.

Count 1, a charge of possessing a schedule I or II illegal drug -  a category comprising many drugs including LSD, cocaine, methamphetamine or oxycodone - is a Class 5 felony with a maximum penalty of five years in prison upon conviction.

Mayer appeared before state Magistrate Judge Leo Disburg on Monday afternoon on the six counts and was given a personal recognizance bond and released from jail. His next court appearance likely will be later in August.

The case of John Robert Mayer, known as JR, involved some unusual switching around for the state circuit court in Pierre.

Mayer’s mother is state Sixth Circuit Judge Bridget Mayer. When she was appointed in March by Gov. Kristi Noem, Mayer had been an assistant attorney general in Pierre for 30 years.

He’s been a prosecutor for about 35 years and in 2014 was named South Dakota’s top prosecutor of the year.

John Mayer gave the family’s home in Pierre as his address to police.

Whenever there’s a conflict of interest or even the appearance of one — as when a court employee maybe be involved in, or have a personal connection to, a case — a judge from outside the 6th Circuit is appointed to the case to maintain the neutrality needed, Covey said.

She said Judge Mayer would not be commenting on the issue, as is routine for judges to avoid public comment on any case.

The Sixth Circuit has four judges (one of the four slots is empty at the moment) and one magistrate judge to serve 14 counties.

Trimble served 20 years on the bench in the Rapid-City-based 7th circuit before he retired in 2014.

John Newell not only shot a hole-in-one, but also a birdie and an eagle, on three consecutive golf holes, July 27, at the Hillsview Golf Course near Pierre.

John Newell, Pierre, accomplished most of his golf dreams, all in one day.

“It was one of those days,” said Newell about how well everything went Friday, July 27, at the 18-hole Hillsview Golf Course outside of Pierre. “We were not keeping score. We just play; just for fun.”

The “we” was an oddball happenstance, since Newell sometimes plays alone. On this day though, his golf buddy Darin was there as a witness.

Using a five-iron, he could not see exactly where his drive went. “It’s so far, a long way to see a golf ball,” said Newell. Besides, a slight rise blocks the view of the green from the tee-box. “I thought, ‘That’ll be a good shot. That’ll be on the green.’ Of course, hole 17 seems to be the biggest green in all of South Dakota.” We went to look for the ball, and found it in the hole.”

“A golfer’s dream; a birdie, an eagle, and a hole-in one,” said Newell. Now, his next dream-come-true would be to shoot a course par, a 72 for the Hillsview Golf Course.

Carin Hayn, manager of the course, put Newell’s information up for all to see. “WOW! John Newell just had a 3 hole stretch all golfers dream of. Holed out his 2nd shot for eagle on #15. Made a long putt on #16 for birdie. Made a HOLE IN ONE on #17! Awesome. Congrats John,” posted Hayn. Newell added, “They really celebrate you.” And, Newell’s wife had the hole-in-one ball set in a glass box for permanent display.

Despite his illustrated talents and skills, Newell does not play in tournaments, with the exception of some charity fundraisers. As for his witness, Darin, “Oh, he played fine,” said Newell.

Mersino, an Omaha firm, in late July installed this dewatering system plunging 42 sandpoints down 17 feet around the sinkhole in Griffin Park in Pierre. In coming days, the same firm will do the same kind of dewatering of a much larger area in Griffin Park as city leaders voted Sept. 24 to try to finally fix the leaking sewer pipe problem. The clear plastic valves on top of each sandpoint allow the monitoring of the pump-powered vacuum pulling water up out of the ground to lower it in the sinkhole so crews can fix the old leaking sewer pipe. (Stephen Lee/Capital Journal)

Enough progress has been made on the sewer repair project in Griffin Park in Pierre so it no longer should be called a sinkhole, Utilities Director Brad Palmer told the City Commission on Tuesday.

After two weeks of digging, “it’s turned into a big hole,” he said in what appeared to be a rather brief and mirthless smile.

The dewatering system installed by an Omaha company has worked in pumping out the groundwater that has bedeviled work crews trying to get at the damaged sewer pipe, Palmer said. “It’s really helped us get some work done,” he said.

The damaged 24-inch-diameter pipe likely created the sinkhole which appeared about July 12 on an asphalt walking path in the park near the Missouri River.

City crews began work about July 17, fighting rain and high river and high groundwater as they tried to dig down to the pipe about 12 feet below ground.

On Tuesday, city workers were able to get at the old sewer pipe and get a camera inside, Palmer said.

“We could see still some damaged pipe up there.” Which means the crews have to go farther.”

Palmer showed some slides of the work to the Commission during its regular, televised weekly meeting that is shown in the local Oahe-TV at Channel 8 on the local cable system.

It appears as if the hole has been dug much bigger that it was, with a second trench box of steel installed to give workers safe working conditions, Commissioner Blake Barringer said, asking Palmer how much farther the work would go.

With the better views now of more damaged sewer pipe, “We will bring in another trench box tomorrow and go an additional 20 feet,” Palmer told Barringer on Tuesday evening, July 30.

“And then we will run the camera in there and see what that pipe looks like.”

But it’s still a temporary fix until a much more permanent and bigger repair to the decades-old sewer pipe in the Griffin Park area can be done late this year or next year, Palmer said.

The decades-old 24-inch clay pipe, lined with plastic in the 1990s, is made up of four-foot-long sections that present lots of joints where leakage issues can arise, one city worker said.

Already lessons are being drawn from the sinkhole-now-big-hole case.

In other business on Tuesday, the City Commission approved spending another $10,112 on a sewer upgrade project going on near Jefferson Elementary School. It’s a mile away or more and well uphill of the mainline sewer break in Griffin Park where two-thirds of the city’s sewage flows.

Kyle Kurth, a staff engineer for the city, told the Commission that Hydro-Klean, the contractor working on the sewer line near Jefferson on the north end of town, suggested adding in money in a “change order,” to fix an adjacent section. Since the site already is open and the logistics are right, it could be done quicker and easier now than coming back another time and reopening the ground to do what already needs to be done.

The contractor is using a process called CIPP sewer lining, for “cured-in place pipe,” that rehabilitates old sewer pipe inexpensively without tearing up all the ground and installing entirely new pipe.

The project near Jefferson was initially bid at $266,422 so the proposed change order is fairly small.

“It only makes sense to do it now,” said Commissioner Jamie Huizenga.

This sewer line by Jefferson is not a mainline like the pipe in Griffin Park, he said.

But after the past two weeks of the Griffin Park sinkhole drama “we understand the value of sewer line maintenance,” Huizenga said.

He moved to approve the extra spending and the Commission voted 4-0 for it. Commission Vona Johnson was absent.

The Capital Area United Way kicks off its 2019-2020 campaign on August 22 at Steamboat Park Amphitheater.

The fun begins at 5 p.m. and wraps up at 7:30 p.m. There is no cost to attend and no cost for any of the activities. The only cost is what attendees decide to buy at the food trucks.

Rathbun encourages everyone to come out and celebrate their community. “This is the first time we are launching our campaign this way. We want to create a family fun experience for the entire community. It’s a fun way for us to announce this year’s campaign chairs and fundraising goal. The event is designed to highlight friends and neighbors who contribute and receive support through the 20 United Way partner agencies.”

The Capital Area United Way fights for the health, education, and financial stability of every person in Hughes and Stanley counties. Through its community-wide fundraising efforts, the Capital Area United Way helps to support 50 programs and services offered through 20 local United Way funded agencies. Through a strong volunteer system, United Way brings together business, government, and committed people to address local health and human service needs in Hughes and Stanley counties.

A Pierre man, convicted of possession with intent to distribute a controlled substance and possession of a firearm by a prohibited person, has been sentenced.

According to news release U.S. Attorney Ron Parsons , Paul Frost, age 47, was sentenced by U.S. District Judge Roberto Lange on July 29. Frost must do 24 months in federal prison, followed by three years of supervised release, a $1,000 fine, and a special assessment to the Federal Crime Victims Fund in the amount of $200.

The convictions stemmed from an incident on June 15, 2018, where Frost knowingly and intentionally possessed methamphetamine, with the intent to distribute. Further, on both April 3, 2017, and June 15, 2018, Frost, being an unlawful user of a controlled substance, did knowingly illegally possess firearms.

Drug trafficking is an inherently violent activity. Firearms are tools of the trade for drug dealers. It is common to find drug traffickers armed with guns in order to protect their illegal drug product and cash, and enforce their illegal operations.

This case is part of Project Safe Neighborhoods, a program bringing together all levels of law enforcement and the communities they serve to reduce violent crime and make our neighborhoods safer for everyone. The Department of Justice reinvigorated PSN in 2017 as part of its renewed focus on targeting violent criminals, directing all U.S. Attorney’s Offices to work in partnership with federal, state, local, and tribal law enforcement and local communities to develop effective, locally-based strategies to reduce violent crime.

Frost will report to the custody of the U.S. Marshals Service on August 6.