On Aug. 21, 2019, Warden Wanda Markland showed Gov. Kristi Noem around the SD State Women's Prison in Pierre. That was about exactly a year after Markland began her tenure running the Women's Prison, a job she left abruptly on March 24, 2020, the day after nine inmates walked away from a low-security area of the prison the day it was announced an inmate had the COVID-19 virus.

Five months after she walked away from the state Women’s Prison in Pierre in the wake of a COVID-19 case reported in the prison, Philomene Boneshirt is back behind bars.

She was one of nine inmates of the prison who walked away from a low-security facility at the prison on the evening of Monday, March 23, hours after prison officials announced an inmate had the COVID-19 virus.

The day after the women took off, Women’s Prison Warden Wanda Markland herself walked off the campus, giving notice on the way out the door. She had been hired out of the Tennessee state prison system in the summer of 2018.

On March 25, Deputy Warden Darren Berg was named interim warden and on April 24 was put on a permanent basis.

By March 25, seven of the nine women had been taken back into custody, most of them found in Pierre or on the Crow Creek Indian Reservation southeast of Pierre.

On April 17, Sylvia Red Leaf was arrested in Box Elder, next to Rapid City, leaving Boneshirt, 25, as the last on the lam.

She was arrested Tuesday, Aug. 18, in Sioux Falls and is in the Minnehaha County jail there, according to Michael Winder, spokesman for the state Department of Corrections which has its administration in Pierre.

When she escaped, Boneshirt was serving a sentence of seven months, 15 days, for simple assault and a consecutive sentence of one year for drug possession that was handed down in November 2018 in Sioux Falls.

In March, relatives of inmates told the Capital Journal that women there were upset with crowded conditions and concerned they were vulnerable to getting the coronavirus.

The woman with coronavirus recovered and there have not been any other inmates who tested positive for the coronavirus, according to prison records.

According to Winder, walking away from “a non-secure correctional facility without authorization constitutes second-degree escape, a Class 5 felony punishable by a maximum of five years in prison.”

Gov. Kristi Noem is scheduled to speak at next week’s Republican National Convention, through which President Donald Trump will officially be renominated as the party’s 2020 presidential candidate. At left, Trump speaks during a February rally in New Hampshire. At right, Noem speaks during a June news conference in Pierre.

A strong and vocal supporter of President Donald Trump, Gov. Kristi Noem is slated to address the Republican National Convention next week.

“She is scheduled to speak. At the moment, it looks like she’ll be speaking on Wednesday,” Noem spokesman Ian Fury told the Capital Journal on Tuesday.

The quadrennial convention is set to begin Monday in Charlotte, North Carolina, and expected to run through Aug. 27. However, as is the case with this week’s Democratic National Convention, some or most of the RNC may actually take place through virtual means due to the COVID-19 pandemic.

Trump and Vice President Mike Pence are expected to be formally renominated to carry the GOP presidential banner on Monday. According to the Charlotte Observer, Pence is expected to deliver his acceptance speech in Baltimore, Maryland on Aug. 26. At this time, it is believed that Trump will make his speech at The White House on Aug. 27.

Noem has steadily raised her profile in national conservative political circles, making regular appearances on Fox News in recent months. Despite criticism from some, Noem has declined to ever issue a shelter-in-place order, or mandate masks in public, amid COVID-19.

Furthermore, some of Noem’s recent tweets are as follows:

July 15: “Here we go again... As I said months ago, the call to apply a one-size-fits-all approach to #COVID19 is herd mentality; it’s not leadership.”

July 16: “NEWS: South Dakota closed the 2020 budget year with a $19 million surplus. Despite challenges with #COVID19, we remain in a strong financial position.

July 17: “South Dakota took a different path, a remarkable one: we gave our people their Freedom.”

July 17: “This is America. We pray, we sing the Star-Spangled Banner, and we celebrate the liberties that make our country special.”

July 28: “Our state’s future depends on educating our kids. Online learning got us through the initial phase of #COVID19, but it’s absolutely NOT a long-term solution. We need our kids back in the classroom.”

Aug. 5: “We need more optimism in this country. There’s too much negativity right now. We’re in a good spot in our fight against #COVID19. We’ve learned how to better treat this virus. So let’s be optimistic and set a better tone for our children.”

Aug. 10: “There is a risk associated with everything that we do in life; more South Dakotans have died from accidental injuries than from #COVID19 in the past 5 months. We mitigate risks by taking proper precautions.”

Aug. 14: “Despite significant dysfunction in Congress, @realDonaldTrump continues to problem solve and provide great leadership during our #COVID19 recovery effort.”

As for the RNC, it was originally scheduled for Charlotte, but Trump later wanted to conduct a portion of it in Jacksonville, Florida. This plan was eventually scrapped, but RNC officials decided to proceed with the Charlotte component.

North Carolina, with its 15 Electoral College votes, is one of several key battleground states for which Trump and Democrat Joe Biden are expected to compete fiercely for this year. Other major battlegrounds for this year’s presidential race are:

For perspective on population, South Dakota has only 3 electoral votes. Trump is heavily favored to carry the state, as he won it by 30 points in 2016. The last Democrat to win South Dakota in the presidential race was President Lyndon B. Johnson in 1964.

Trump, meanwhile, kept up with his regular battles with seemingly anyone on Wednesday, even taking a Twitter shot at Goodyear Tires, a company originated and still headquartered in Akron, Ohio.

“Don’t buy GOODYEAR TIRES. They announced a BAN ON MAGA HATS,” the president tweeted. “This is what the radical left Democrats do.”

The company responded: “Goodyear has always wholeheartedly supported both equality and law enforcement and will continue to do so.”

“Despite significant dysfunction in Congress, @realDonaldTrump continues to problem solve and provide great leadership during our #COVID19 recovery effort.” 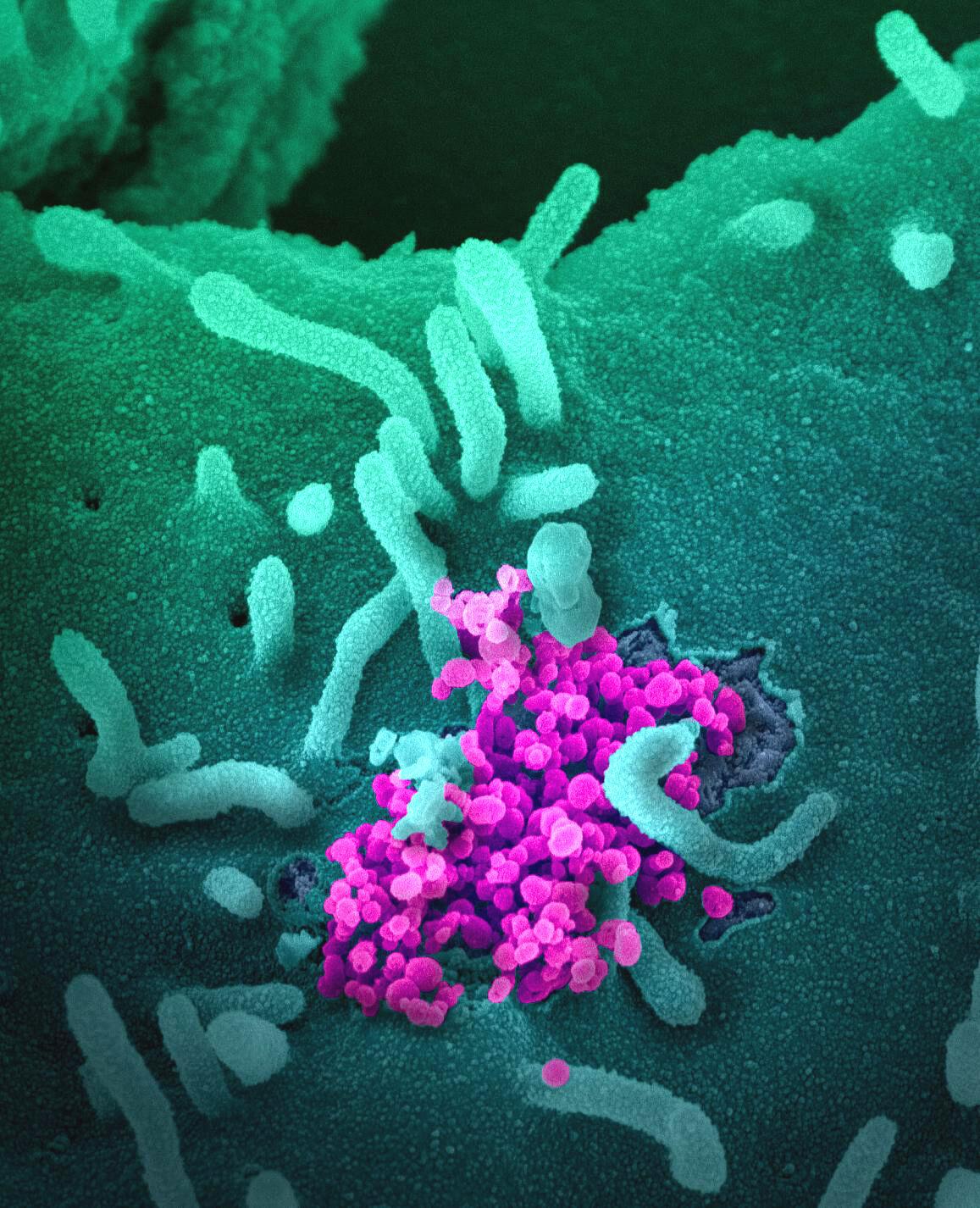 Shown is a highly magnified photo of the virus that creates COVID-19.

Coronavirus
COVID-19, By The Numbers

Deaths attributed to COVID-19 in Hughes County, according to the South Dakota Department of Health as of 4 p.m. Wednesday.

15 (-2 from Monday)Active COVID-19 cases in Hughes County, according to the South Dakota Department of Health as of 4 p.m. Wednesday.

3 (+1 from Monday)Active COVID-19 cases in Stanley County, according to the state Department of Health as of 4 p.m. Wednesday.

1,222 (+28 from Monday)Active COVID-19 cases in South Dakota, according to the state Department of Health as of 4 p.m. Wednesday.

Japhia Jordan English Pretty Weasel pleaded not guilty this week to felony charges of abuse and battery against two small children in a van rollover in July north of Pierre.

In state court Tuesday in Pierre, Japhia Jordan English Pretty Weasel pleaded not guilty to felony charges of abuse and cruelty and of vehicular battery against two small children stemming from the July 9 rollover of the van he was driving north of town.

Hughes County State’s Attorney Roxanne Hammond says Pretty Weasel, who turns 22 this week, was driving drunk and speeding, about 70 mph, about 11:20 p.m., July 9, 2020, in a 2002 Mercury Villager minivan. He lost control on a curve on state Highway 1804 north of Pierre, not far from Lake Oahe and the van rolled in the ditch.

An open container of Pabst Blue Ribbon was found, as well as empties, and Pretty Weasel smelled of alcohol and failed field sobriety tests and tested above the legal limit for alcohol in the blood, said the Patrol trooper who provided an affidavit of probable cause to the court.

Pretty Weasel, who has been in the Hughes County Jail in Pierre since the crash, appeared in court via interactive TV from the jail, one of the new procedures because of concern about COVID-19.

He is charged by Hammond with two Class 3 felonies of abuse or cruelty to a child under the age of 7, each carrying a maximum sentence of 15 years in prison, on conviction. He also is charged with a count of vehicular battery of each of the children, Class 4 felonies each with a top sentence of 10 years in prison. He’s also charged with several lesser charges related to drunk and reckless driving.

Pretty Weasel’s attorney, Dave Siebrasse, told state Judge Bridget Mayer that since the complete police reports are not yet available, his client is pleading not guilty.

“My client is remorseful and wants to move (the case) forward. (He) did not plead guilty because we don’t have all the information.”

Siebrasse asked for a relatively low bond so Pretty Weasel could be freed awaiting disposition of this case.

“He would not be a danger to the community. He would not drive. He’s got good family support,” Siebrasse said.

Pretty Weasel is not interested in maintaining his not-guilty plea, but is simply waiting for all the reports to be completed for an agreement to be reached with prosecutors, Siebrasse told Mayer.

Hammond told Mayer that it wouldn’t be appropriate to release Pretty Weasel on his own recognizance without paying a bond when “he’s facing Class 3 and Class 4 felonies. So at least a thousand-dollar bond would be appropriate.”

Mayer went with Hammond’s request and set a raft of conditions for Pretty Weasel to follow if he does make the $1,000 bail.

Mayer set his next court date for Sept. 9.

Fort Pierre Volunteer Firefighters, a Stanley County Sheriff's deputy and others examine the result of rear duals burned up on a semi-trailer full of wheat on Island Drive just before the John C. Waldron bridge about 3 p.m., Wednesday, Aug. 19.

The owner and driver of the semi-tractor and trailer that had to pull over of U.S. Highway 83/14 in Fort Pierre on Wednesday, Aug. 19, to put out flames in the  rear duals. After the Fort Pierre Volunteer Fire Department doused the fire, the duals were chained up and the driver, seen here,  took it slow to a tire shop nearby.

A trucker driving a veteran cab-over Freightliner truck tractor pulling a trailer load of wheat noticed back wheels on fire in Fort Pierre as he approached the John C. Waldron bridge to Pierre, shortly before 3 p.m. Wednesday, Aug. 19.

He pulled off on Island Drive, near the Perkins Restaurant. Firefighters from the Fort Pierre Volunteer Fire Department soon had the burning rubber put out and made sure the fire and heat didn’t do serious damage, they said.

Nearby onlookers at Perkins said they saw flames on the passenger side back tires as the truck pulled off U.S. Highway 14/83 near the Missouri River.

Apparently the rear duals on the passenger side quit turning and the skidding heated up the tires enough to start a fire.

“He got her shut down,” so there wasn’t much collateral damage, said Assistant Fire Chief Tye Odden said of the driver, who owns the truck.

Even the wheel rims looked like maybe they would live to turn another day, he said.

Perhaps the brakes set up.

“He wasn’t sure what locked up in there,” Odden said.

The driver and others chained up the rear axle so it was off the ground so the truck could limp a few blocks to a repair shop to put on new tires.