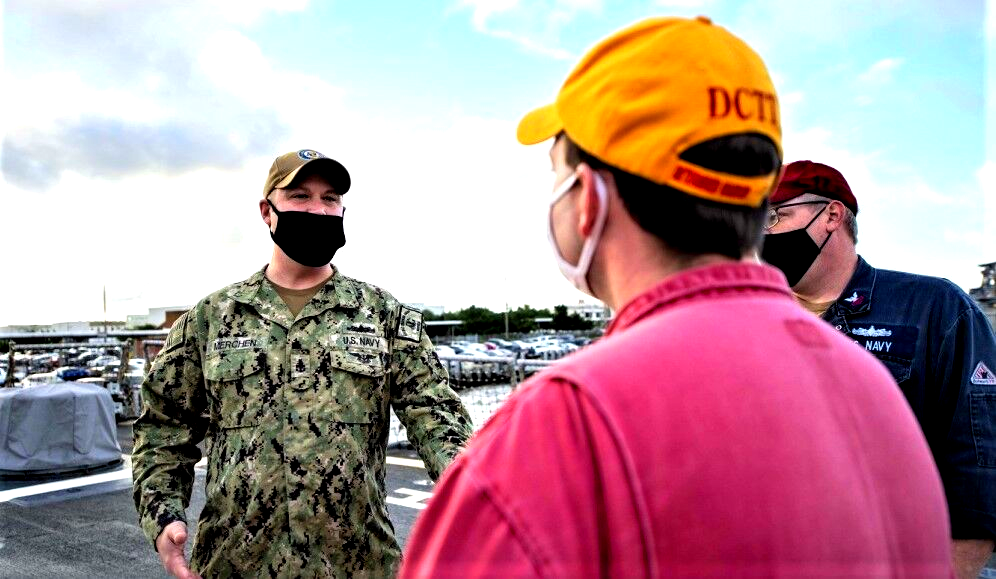 Senior Chief Damage Controlman William Merchen, a Rapid City Central High School grad, left, checks out the new crew on the USS Cole 20 years after he survived the terrorist bombing of the Cole and helped save the lives of many fellow sailors. 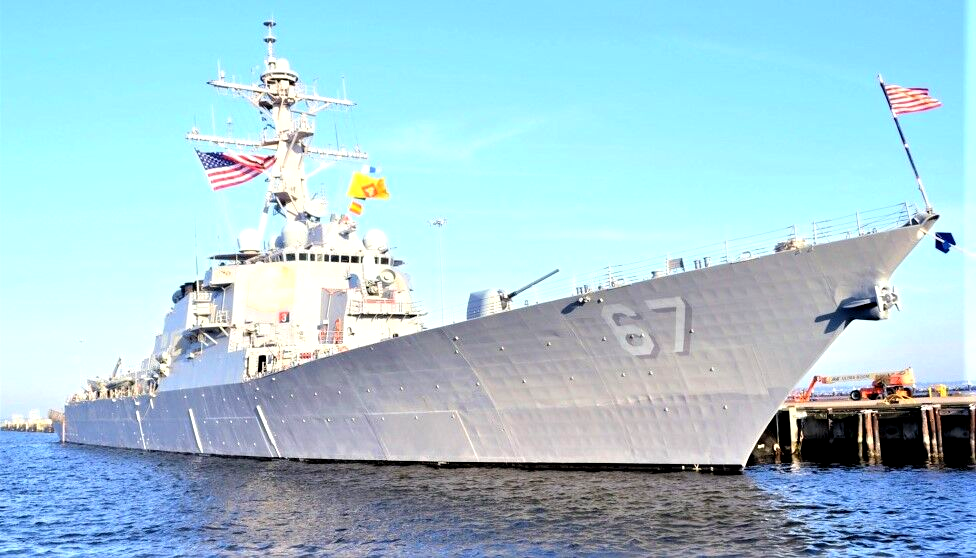 Senior Chief Damage Controlman William Merchen, a Rapid City Central High School grad, left, checks out the new crew on the USS Cole 20 years after he survived the terrorist bombing of the Cole and helped save the lives of many fellow sailors.

It was 11:18 a.m., Oct. 12, 2000, aboard the USS Cole, an Arleigh Burke-class guided-missile destroyer that had arrived at Aden on the coast of Yemen that morning to put on fuel at a key point where the Red Sea ties into the Indian Ocean, ties Africa to Asia.

Suddenly, the ship’s lights went out and all ventilation stopped. An explosion had occurred on the port side of the ship. Senior Chief Damage Controlman William Merchen back then was a newly frocked petty officer third class and one of three sailors putting tools away after morning maintenance duties.

The Cole had been bombed in an attack by al Qaeda terrorists, killing 17 Navy sailors and injuring 37 others.

The explosive created a 40-by-60 foot hole on the port side of the ship, and Cole’s sailors fought fires and flooding for the 96 hours to keep the ship afloat.

The Oct. 12 anniversary is a stark reminder of what it means to serve in the Navy, says Merchen, who grew up in Rapid City.

“We were standing there speaking one moment, and then the next moment we were on the deck on the other side of the shop and it was dark, the room was starting to fill up with smoke and we couldn’t breathe so well,” said Merchen.

He said his shop contained light bulbs and cans of paint that had exploded when a small boat carrying two suicide bombers pulled alongside Cole and collided with the ship. Paint spilled all over the shop and broken glass covered the floor.

The three sailors climbed down the port side ladder-well to the damage-control deck to don self-contained breathing apparatuses and helmets equipped with flashlights. Once they got on air, they began to hear voices in the Chiefs Mess.

“The things they were saying were beyond just ‘I’m trapped’ and ‘get me out of here,’” said Merchen. “People were describing how they were injured. We knew we had to get in there as quickly as possible, but that wasn’t going to be as easy as opening the door.”

One of the sailors created an opening in the bulkhead on the chief’s mess and they began rescuing the trapped sailors. That was just the beginning of the fight to save the ship over the next 12 days.

Merchen said everyone stepped up, dug in, and put their own safety and feelings aside to attack the damage to the ship and get people out, which helped save a lot of lives.

People who would otherwise have succumbed to their injuries survived because others stepped out of their comfort zones, stepped away from their typical job and responded to the crisis, he said.

Today, Merchen is assigned to Afloat Training Group Atlantic as a damage control mission readiness inspector, where delivers first-hand knowledge to a new generation of sailors, preparing them to better deal with combat casualties, due to the attack on the Cole 20 years ago.

“It has shaped everything that I’ve done at every command I’ve been to,” said Merchen. “There hasn’t been a single one of those trainings or drills that I haven’t thought about the attack on Cole.”

Merchen has recently been assigned to work with Cole’s damage control teams to ensure they are up to speed and ready for any threat or casualty they may face at sea.

“Senior Chief Merchen, he’s a professional,” said Cmdr. Edward J. Pledger, commanding officer of Cole. “I often talk about Cole heroes, and the honor of being able to meet any of them. He’s a Cole hero and having him on our ship and training us — it’s very special to have that opportunity.”

Merchen said his opportunity to work with Cole again is a fantastic way to reconnect with a ship that he is deeply proud to have served on.

“I hadn’t been aboard Cole, except maybe once since the attack,” said Merchen. “As I go through the spaces, I do think about what they looked like after the attack. I do think about where I know certain people passed away or where they were injured. It’s good to remember that stuff. It does a service to those people that were injured and honors the people that were killed.”

“When he speaks, our sailors listen, because they know this isn’t somebody who just has been teaching it from a book,” said Pledger. “This is somebody who has done it in real life and understands that if you don’t do it right, people could die or you could lose your ship.”

As Merchen nears retirement, he finds pride and hope in the junior sailors throughout the Navy, especially those serving on Cole.

“When I look into the news today and I see Cole is off on another deployment or completing another exercise or working with a foreign Navy, I see the ship floating in the water. I see it out executing missions to keep us safe in the United States. I know that the ship wouldn’t [be doing those things] if it wasn’t for the actions of so many brave people and the sacrifices of so many fantastic Sailors back in October of 2000 in Aden, Yemen,” said Merchen.