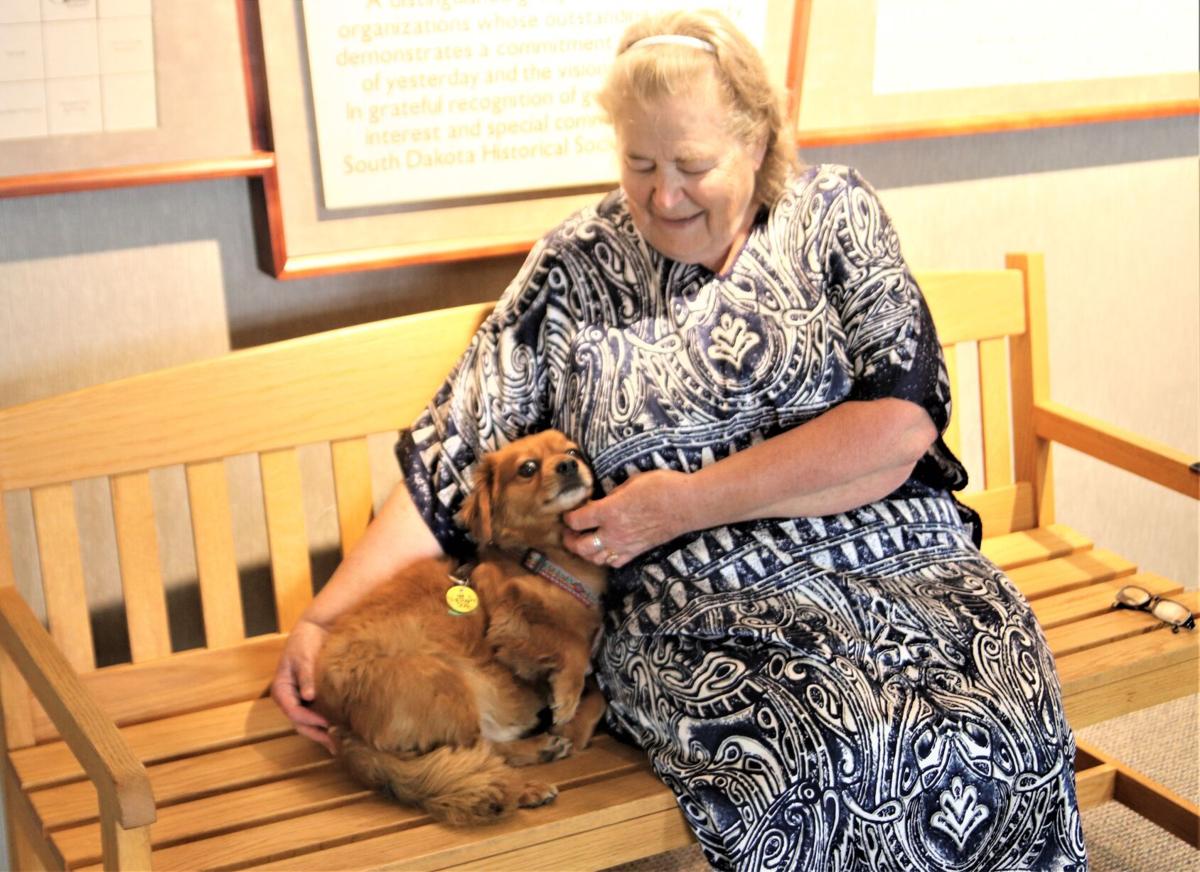 Elaine Pye and her therapy dog, Pumpkin, volunteer the dog's calming services at various facilities in the Pierre area. Unlike service dogs which work in assisting their handicapped handlers, and unlike emotional support dogs which help calm their masters, a therapy dog is trained and certified to help calm others. 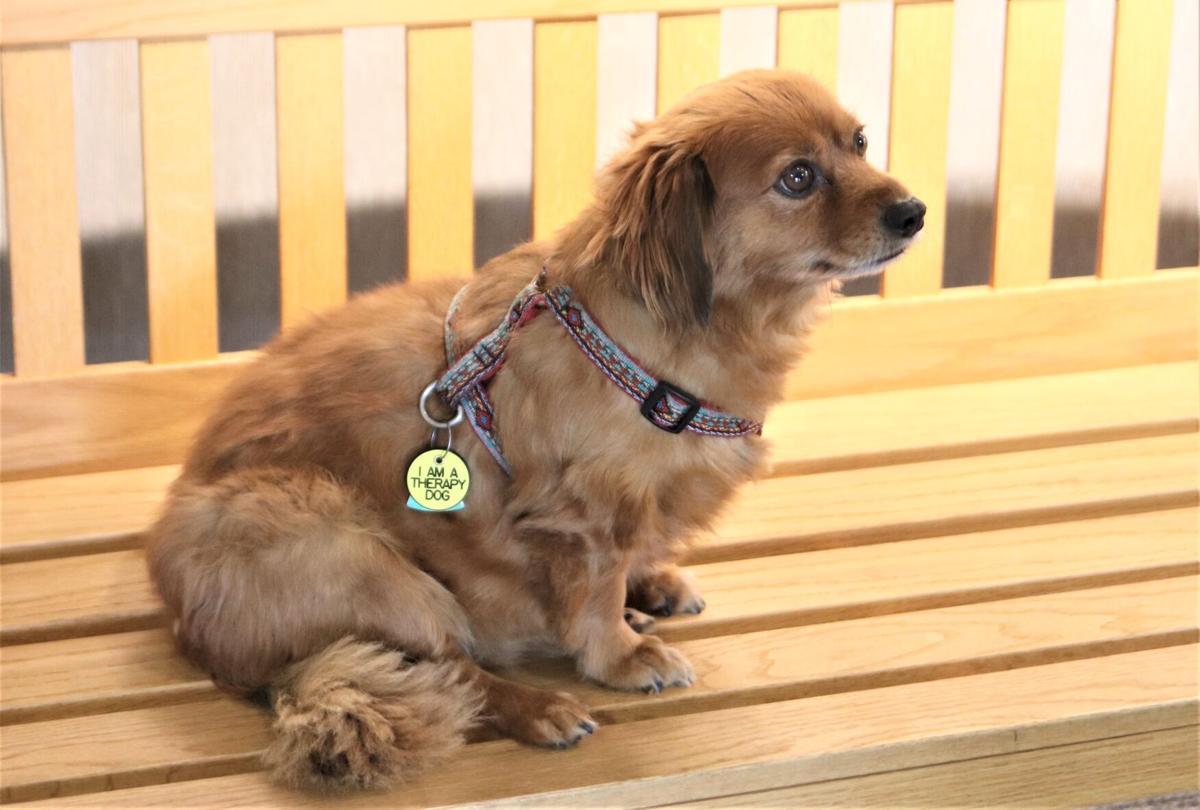 With training, certification, and a tag that clearly states "I am a therapy dog," Pumpkin volunteers with its owner, Elaine Pye, to help calm and relax children and adults. 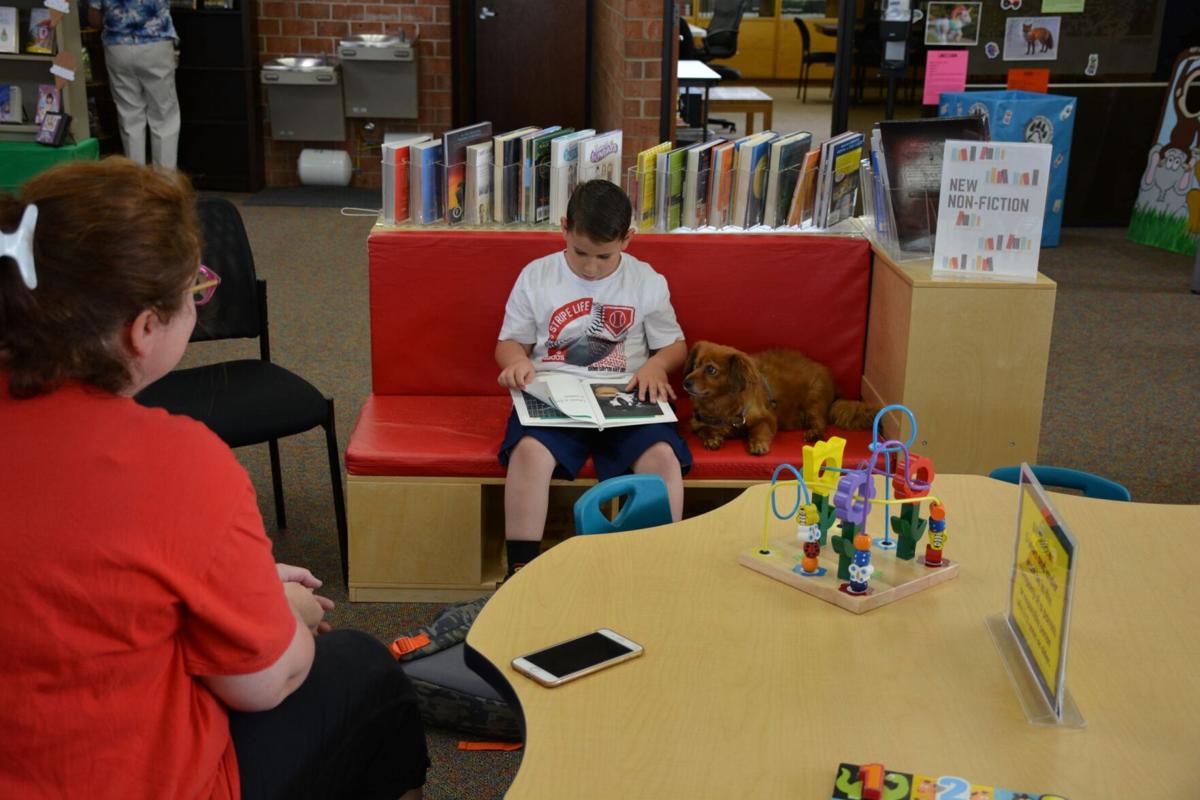 Elaine Pye and her therapy dog, Pumpkin, volunteer the dog's calming services at various facilities in the Pierre area. Unlike service dogs which work in assisting their handicapped handlers, and unlike emotional support dogs which help calm their masters, a therapy dog is trained and certified to help calm others.

With training, certification, and a tag that clearly states "I am a therapy dog," Pumpkin volunteers with its owner, Elaine Pye, to help calm and relax children and adults.

As far as Elaine Pye is aware, her tiny dog — Pumpkin Pye — is the only trained, tested and certified therapy dog in Pierre. And both are keeping busy with visits to the Rawlins Municipal Library, Cultural Heritage Center, nursing homes and other facilities to help calm and ease youngsters and the not-so-young.

“Many people have companion dogs. Those are not therapy animals,” Pye said. “Pumpkin has a registration number for certification. He has a tag that reads ‘I am a therapy dog.’ He has the disposition of a cocker spaniel, but I think he is a spaniel and pomeranian mix. ‘Pound hounds’ are the best ones to be trained as therapy dogs.”

Cindy Bailey, director of the Sioux Falls Therapy Dog Chapter, said service and therapy dogs are not the same things.

“Service dogs can go anywhere,” she said. “Therapy dogs go where there is an agreement with the facility, a kind of partnership or mutual agreement.”

Bailey said that service dogs assist their owner or handler, while therapy dogs provide therapy to others. Their role is to go to hospitals, assisted living centers, libraries and schools and other places to provide emotional support to whomever they are working with.

Bailey said a dog must be at least one year old before they begin therapy dog certification. The testing costs $5, and the annual renewal of the certification costs $35.

Passing the hour, or longer, test sometimes comes with the first try, while for some dogs it’s the third try. And some dogs just don’t make it.

There are approximately 75 such certified dogs in the greater Sioux Falls area. To the best of Bailey’s knowledge, their chapter is the only chapter of its national organization in South Dakota, though there could be other organizations that certify therapy dogs.

Pye got into therapy dogs by accident about five years ago, while living in Brunswick, Georgia. She said Pumpkin was the only dog in the pound not barking and screaming. Pye found she sometimes needed that same calmness herself.

A woman noted how traffic didn’t seem to bother Pumpkin while Pye when the two were walking in downtown Brunswick. The woman invited Pye and Pumpkin to a 12-week therapy dog class.

“Technically, we (owners) are being trained also,” Pye said.

After certification, with so many other therapy dogs in Georgia, Pye took turns, spending about two days per week visiting hospital patients. The two also often visited two libraries there.

Therapy dogs visit various facilities. Pumpkin sits and listens to children striving at learning or improving at reading at the Rawlins Municipal Library in Pierre.

“Adults can sometimes be kind of hard on kids learning to read. Pumpkin just sits there and listens,” Pye said.

She added that kids sometimes even thank Pumpkin after a reading session.

“Once a month, the library hosts reading with Pumpkin Pye, a little therapy dog that helps children build reading confidence,” library director Robin Schrupp said. “Young readers pick up a book and read it to the dog. The dog is patient and non-judgmental. The kids seem to like it. Elaine Pye is with Therapy Dogs International. She is a patron and we just got to talking about it one day and thought it would be fun.”

Schrupp isn’t the only person who thinks such a dog in the library is a beneficial idea. After a year of COVID, the group of children visiting to read to Pumpkin is again growing.

“I think it makes children comfortable, in general, in reading to an animal,” library circulation manager Abby Edwardson said. “An animal is more accepting than a human might be. I think it makes the children more willing to read, and makes them want to read more.”

Edwardson said that a group of about 10 youngsters read with Pumpkin, typically scheduled for the first Saturday of each month at the library.

“The adults really enjoy watching the children read. It’s entertaining — the children and the dog together — it’s a fun combination to watch.”

Pye compares therapy dogs to service dogs, though they are not.

“You don’t touch them when they are working,” she said. “Until he sits down, you can’t pet him. After he checks you out and sits down, then he gets lovin’. And he really milks it at times.”

At the Cultural Heritage Center where Pye volunteers as a greeter, Pumpkin also says hello to the visitors. Pye estimated Pumpkin volunteered about 1,000 hours in a calendar year.

“I want to make it clear that Pumpkin is here only because he is a certified therapy dog,” Dorinda Daniel, volunteer coordinator for the South Dakota State Historical Society, said. “When people see Pumpkin, their usual reaction is a great big smile on their faces. And Pumpkin only approaches if they indicate they want that.”

“We had to ask state officials if he could be here. If he wasn’t a therapy dog, he probably would not be here,” Daniel said. “I think it does add to visitors’ overall good feelings, it enhances their positive feeling in their visit here.”

Pye said that her dog does not visit the Pierre hospital, mostly because it is too small compared to big-city hospitals that commonly allow therapy dogs. Pye and Pumpkin do visit the Mary House and other retirement facilities. Pye also volunteers as a senior companion, and Pumpkin often goes with.

“We are all over the place,” Pye said. “My rule, though, is I don’t think dogs should be where people eat, such as restaurants. Having a therapy dog visit is all free — that’s the whole idea. You don’t make money with a therapy dog. Anyone with a therapy dog is a volunteer. Sometimes at major hospitals, you might be offered lunch.”

Reporter Del Bartels, a born and raised South Dakotan and a graduate from Black Hills State University, was the editor of a weekly newspaper for 17 years.