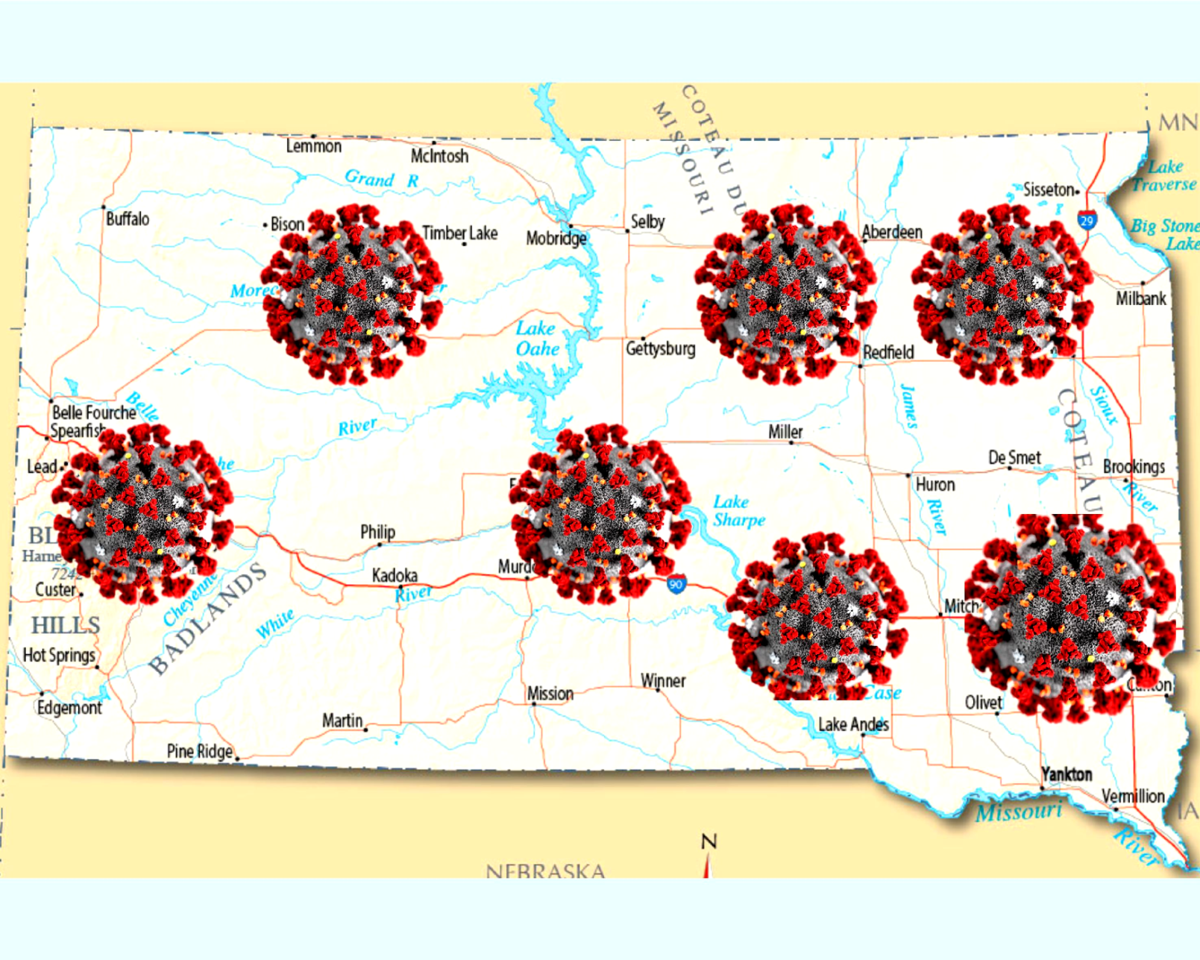 Shown is a map of South Dakota, sprinkled with several highly magnified images of the virus that creates COVID-19. 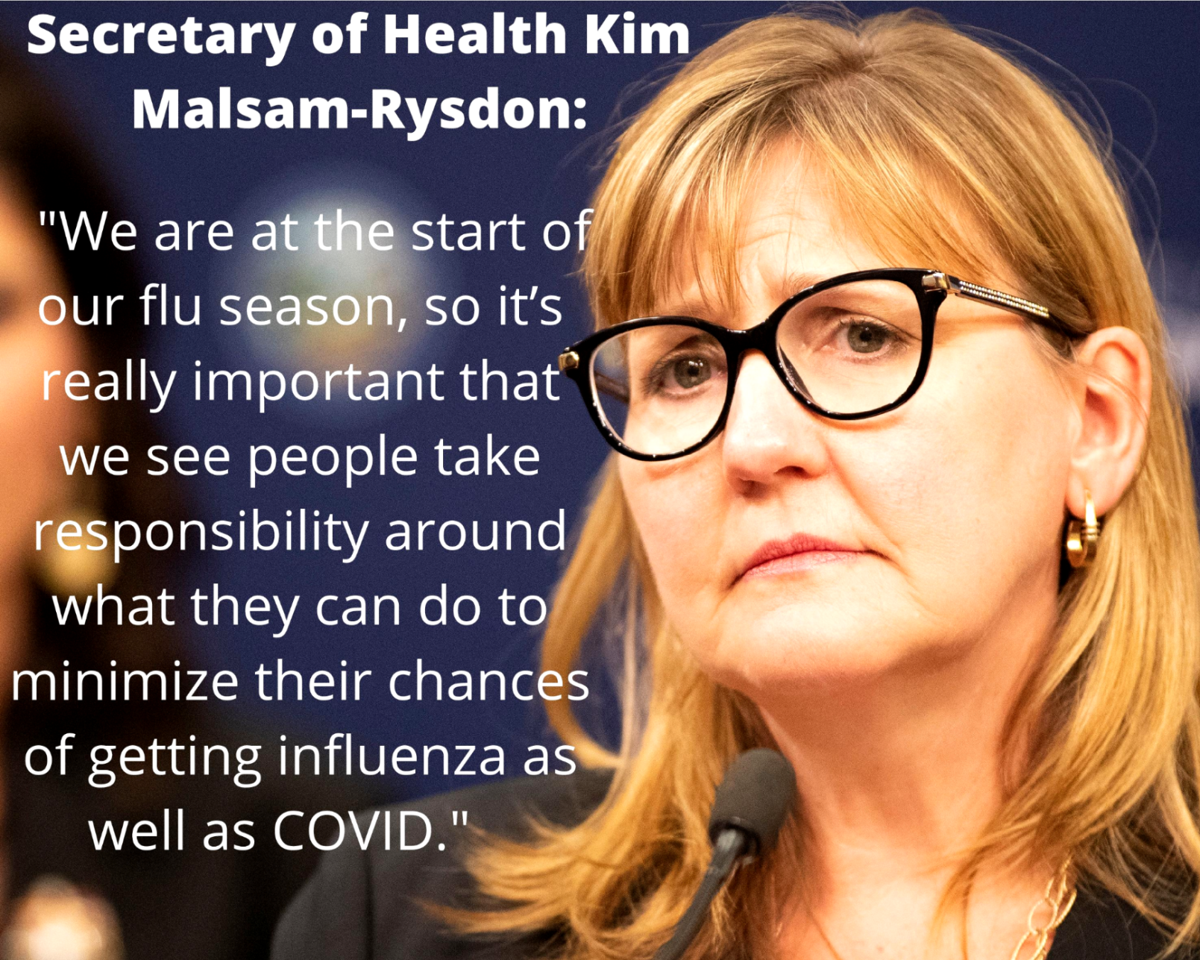 In the photo, South Dakota Secretary of Health Kim Malsam-Rysdon listens to questions during a news conference at the State Capitol earlier this year. The text to the side of the photo is a quote from her Wednesday news conference.

Shown is a map of South Dakota, sprinkled with several highly magnified images of the virus that creates COVID-19.

In the photo, South Dakota Secretary of Health Kim Malsam-Rysdon listens to questions during a news conference at the State Capitol earlier this year. The text to the side of the photo is a quote from her Wednesday news conference.

The top number is how many COVID-19 infections South Dakota has seen per 100,000 residents during the last seven days — a rate that is the nation’s second highest — according to the federal Centers for Disease Control and Prevention (CDC).

The second number is the U.S. average for the same period of time.

South Dakota Versus Other StatesThe CDC operates as an arm of the U.S. Department of Health and Human Services under HHS Secretary Alex Azar. As a member of the presidential cabinet, Azar’s direct supervisor is President Donald Trump.

Information from the CDC on Wednesday showed that only North Dakota, with 76.9, has seen more COVID-19 cases per 100,000 residents in the last week than South Dakota has.

New COVID-19 cases per 100,000 residents, according to the CDC as of Wednesday, in the last week for South Dakota and its neighboring states:

The higher rate of positivity, State Epidemiologist Dr. Joshua Clayton said, usually means there is more diligence in testing. When more testing occurs, more positive cases will be reported, he said. Another reason is there is a “large part” of South Dakota that is in the “substantial” category of community spreading. The level of community spreading, combined with the increase in case identification, differing testing strategies being implemented, and focusing on testing close contacts and at-risk populations altogether, Clayton said, makes for a “fair bit of COVID-19 transmission.”

South Dakota Secretary of Health Kim Malsam-Rysdon and Clayton advised the public to get an influenza vaccination, preferably before the end of October, to prevent a dual flu and COVID outbreak. A vaccination is the “number one way” to prevent the flu, Clayton said.

“We are at the start of our flu season, so it’s really important that we see people take responsibility around what they can do to minimize their chances of getting influenza as well as COVID...We do not want to see hospitals have to bear the burden of a tough influenza season as well as COVID,” Malsam-Rysdon said during a Wednesday news conference.

At last week’s legislative special session, Gov. Kristi Noem applauded South Dakota’s efforts to curb the spread of the virus without imposing any statewide restrictions. Clayton said he hasn’t seen any data that provides evidence that lockdowns and other mandates are more effective in curbing the spread of the virus, and that the generalized increases in South Dakota have been similar to states with more restrictions in place.

“I think if you look across the landscape of the country and you look at how cases have evolved and where we’ve seen trends over time, I think you will see many situations where states that had a very different approach in terms of lockdowns, mandatory business closures, and really putting a halt to normal activity, are not seeing dramatically different results in terms of case numbers, positivity rates at different times, death rates at different times, than what we’re seeing in South Dakota and other states that have taken a different approach,” Malsam-Rysdon said.

Of the 291 deaths in the state, 150 of them have been individuals aged 80 or older, which Malsam-Rysdon said is “consistent” with the outcomes of COVID. Underlying health issues, such as obesity, also affect the severity of COVID cases.

At the South Dakota Women’s Prison, 233 of the 259 reported cases have recovered; only five more from last week. However, Clayton said he anticipates this to be the last week the health department will report on the cases at the prison.

“As it has been from the beginning, COVID is somewhat unpredictable. Obviously, the numbers that we are sharing and talking about every week are critical to understanding the response, and so as we see increases in cases, we would expect to see increases in potential hospitalizations and potential folks using ICU beds and ventilators in those settings, and so that has tracked across the duration of this [pandemic]...but just because we have this many cases today doesn’t mean we’ll need this many beds tomorrow,” Malsam-Rysdon said.

Gotta love it - Noem’s apologist Malsam-Rysdon restating what we all know, that Covid is generally more lethal to our older population, those whose work over the years likely funded the desk she sits at. Moreover, as the director of the State’s Health Department, neither she nor any of her staff have no real plan to help protect that older population, other than to tell them to go and get a flu shot. Impressive!

Thank you, Governor, for your zealous stewardship.