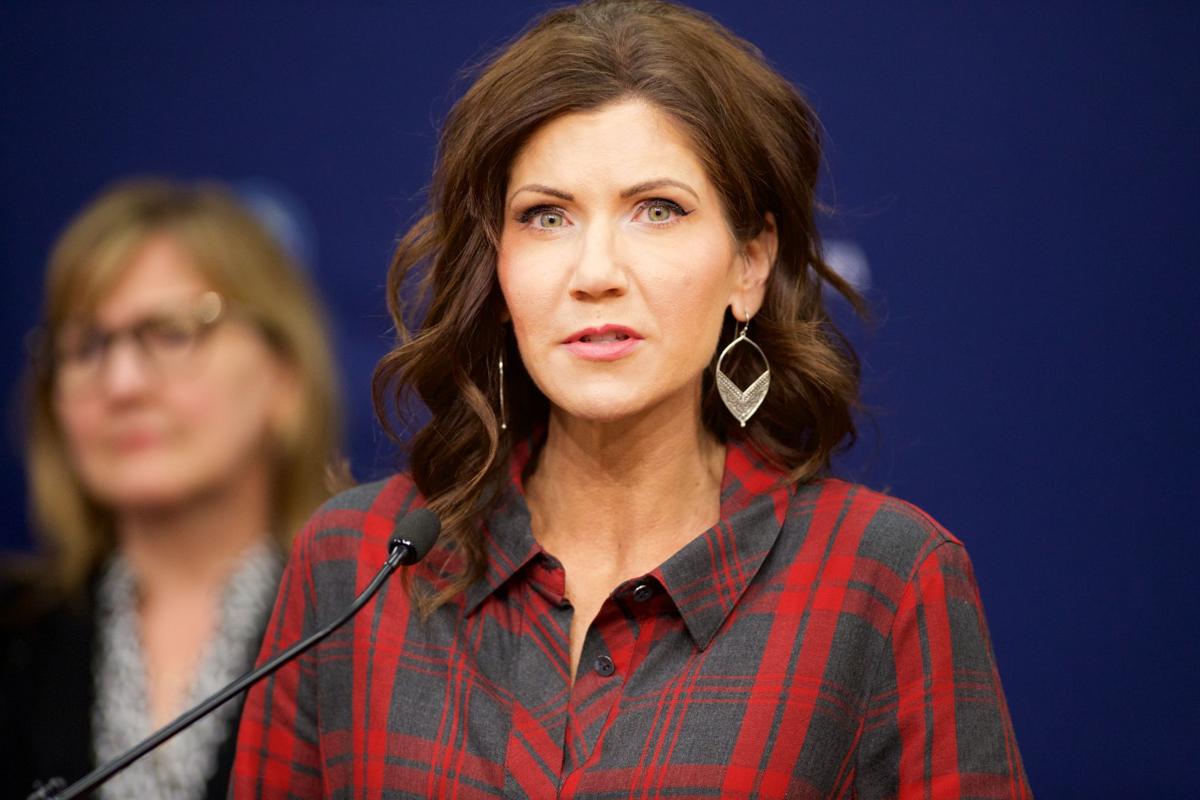 Gov. Kristi Noem delivers information about the COVID-19 outbreak during a Thursday briefing at the State Capitol in Pierre. 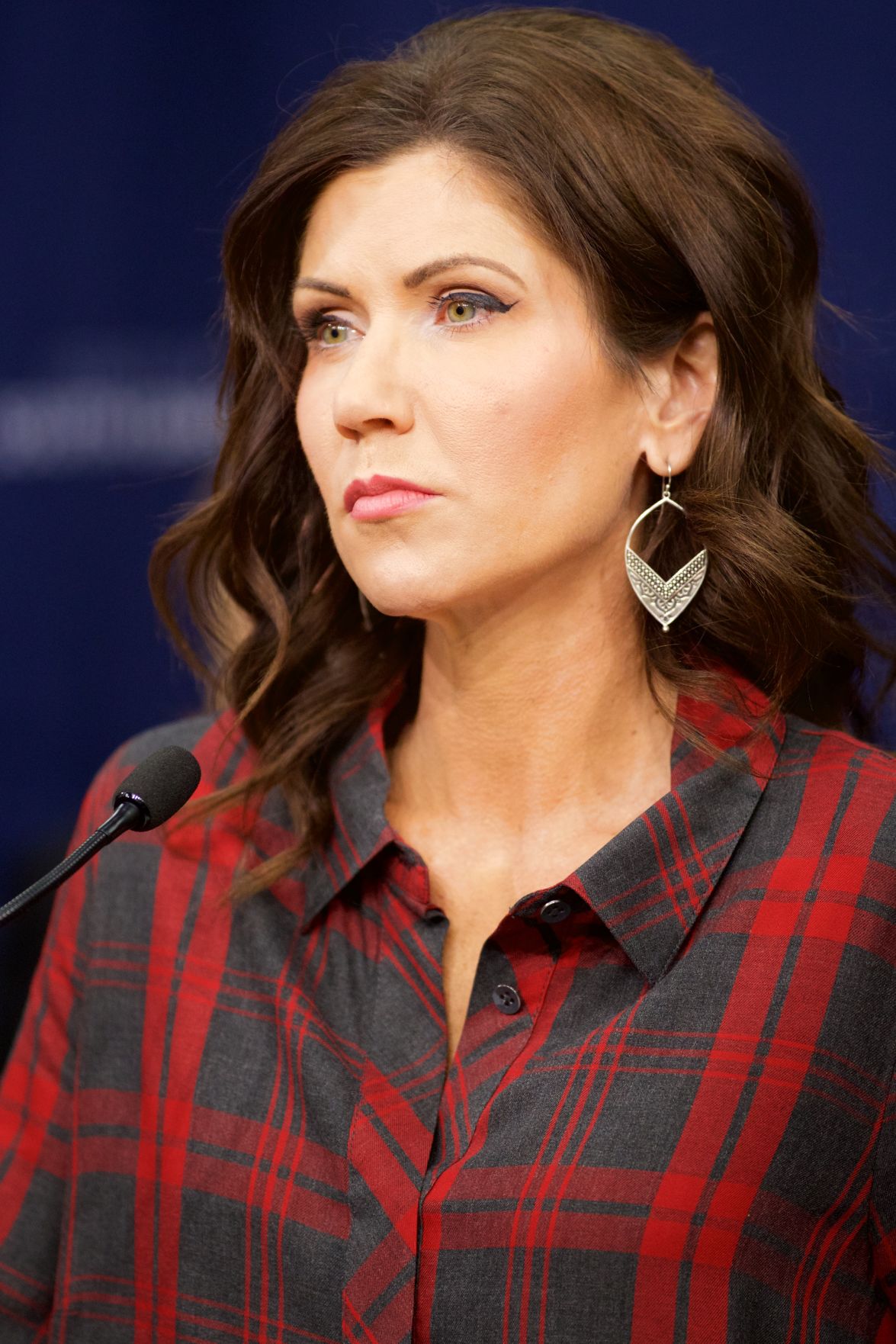 Gov. Kristi Noem listens to a question about the COVID-19 pandemic at a briefing Thursday, April 9 in the Capitol in Pierre.

Gov. Kristi Noem delivers information about the COVID-19 outbreak during a Thursday briefing at the State Capitol in Pierre.

Gov. Kristi Noem listens to a question about the COVID-19 pandemic at a briefing Thursday, April 9 in the Capitol in Pierre.

Being a fiscal conservative, Gov. Kristi Noem is no fan of raising taxes.

However, while watching economic activity across the state evaporate amid the COVID-19 outbreak — which includes what she calls “historical” unemployment for just about every nook and cranny of South Dakota — Noem knows her state budget has sprung leaks.

Thursday, Noem and South Dakota Labor and Regulation Secretary Marcia Hultman announced the number of first-time unemployment claims in the state for the week of March 29 was 7,916. This compares to the previous three weeks of initial jobless claims by week as follows:

During her Thursday media briefing at the State Capitol in Pierre, Noem said that prior to the COVID-19 pandemic striking South Dakota, a typical week of jobless claims ranged from 150 to 180.

“These numbers are historical in our state in the very worst way,” Noem said.

Hultman reminded out-of-work South Dakotans of the additional $600 per week benefit for which they may be eligible because of the $2.2 trillion ($2,200,000,000,000) federal stimulus package. This is formally known as the Coronavirus Aid, Relief, and Economic Security (CARES) Act.

“Claimants do not need to ask for this specifically but should still file a regular weekly request for payment. Remember, you cannot request this until the week is over on Saturday at midnight,” Hultman stated on Thursday.

Those who need to file for unemployment assistance are urged to go to RAclaims.sd.gov.

Meanwhile, Noem is left hoping she can use some of that $2.2 trillion to plug the holes left in her budget because of the steep decline in economic activity her state has seen due to the conundrum of COVID-19.

Currently, South Dakota is one of precious few states that does not impose an income tax on those who work within its boundaries. Noem hopes the federal money will help her keep it that way, without having to consider significant cuts to state services and programs.

However, during her Wednesday news conference, Noem said cities and counties throughout South Dakota are also going to need help.

“I think it’s premature to know today how we would fill budget holes,” Noem said when asked by the Capital Journal about the potential of tax hikes or program cuts.

“Our revenue into the state has been dramatically impacted. This doesn’t just impact the state budget. It impacts every single family and business out there; it impacts city budgets, county budgets, our ability to invest in infrastructure.”

Noem said she hopes to get some clarity and approval from the federal government about being able to use the stimulus funds to close the budget gaps.

Noem said she wants the opportunity to “prove that we have budget holes that were directly tied to this virus and the opportunity to use some of those funds for that need because, today, the way the language is written, that’s in question.”

Noem may receive some assistance in this matter from former Gov. Mike Rounds, who, of course, is now U.S. Sen. Mike Rounds, R-S.D.

This week, Rounds joined three other former governors who are now senators — U.S. Sens. Jeanne Shaheen and Maggie Hassan, both D-N.H., as well as U.S. Sen. Angus King, I-Maine — by sending a letter to Vice President Mike Pence (himself, the former governor of Indiana) seeking help for states.

“Governors and state legislators are best positioned to know how to put these funds to good use. The loss of state and local revenues is just as much a result of the COVID-19 pandemic as the additional costs that state and local governments are facing – and states should be able to use these funds to address both challenges,” states the letter Rounds and the other senators sent to Pence.

Either tax increases or service cuts will have devastating ripple effects that will increase unemployment rates and slow the economic recovery, the senators stated in their news release.

Noem has said the Legislature will likely return to Pierre in June for a special session to deal with the projected budget problems.