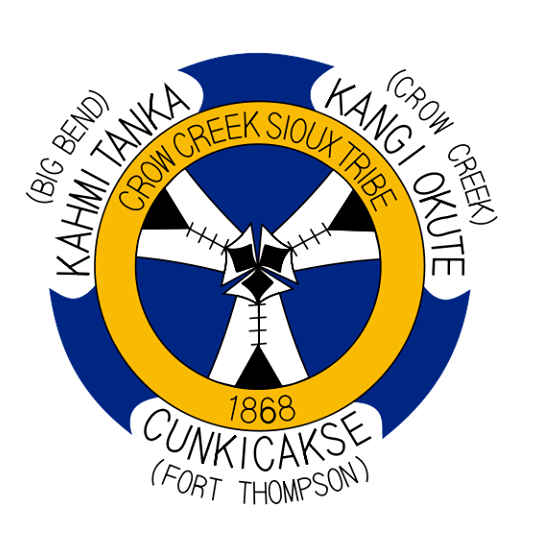 A version of the Crow Creek Sioux Tribe’s seal from the tribe’s social media page. 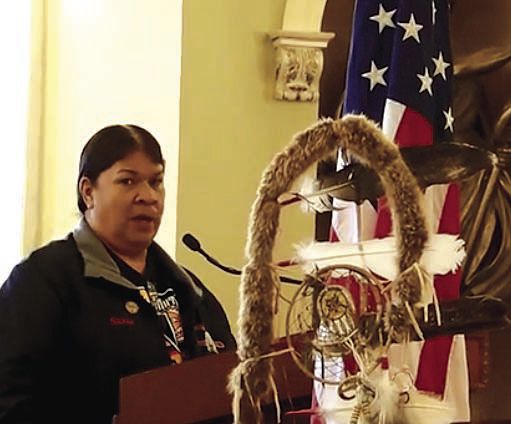 Roxanne Sazue spoke at Tribal Relations Day at the state Capitol in the Rotunda in February 2015 in Pierre while she was chair of the Crow Creek Sioux Tribe. Sazue, 62, pleaded guilty Monday, Sept. 9, in federal court in Pierre to embezzling up to $40,000 from the tribe while she was chair and while working in the tribal finance office, helping others to embezzle, too. This photo is from a social media video of the 2015 Capitol event.

A version of the Crow Creek Sioux Tribe’s seal from the tribe’s social media page.

Roxanne Sazue spoke at Tribal Relations Day at the state Capitol in the Rotunda in February 2015 in Pierre while she was chair of the Crow Creek Sioux Tribe. Sazue, 62, pleaded guilty Monday, Sept. 9, in federal court in Pierre to embezzling up to $40,000 from the tribe while she was chair and while working in the tribal finance office, helping others to embezzle, too. This photo is from a social media video of the 2015 Capitol event.

Lester Thompson, Jr., chairman of the Crow Creek Tribal Council, said Friday the tribal government is in financial straits and may have to lay off employees in the wake of an embezzlement scandal in which four leaders have been charged in federal court.

“There is a financial shortfall,” Thompson told the Capital Journal from tribal offices in Fort Thompson in response to questions raised at a court hearing Friday in Pierre. “Actions have been taken to address the shortfall. Some of these actions are going to be — hopefully short-term — layoffs.”

Friday morning, Tribal Council Member and Treasurer Roland Hawk, Sr., former Chairwoman Roxanne Sazue, who works in the tribe’s finance offices with tribal employees Francine Middletent and Jacquelyn Pease, made initial appearances in federal court in Pierre on charges of embezzling more than $1,000 from the tribe. (The $1,000 figure is a statutory threshold in federal law that does not necessarily reflect the amount of money prosecutors allege the four embezzled.)

They also are charged with aiding and abetting each other in embezzling the money.

The charges carry a maximum penalty of five years in prison and a $250,000 fine if they were found guilty.

The four were arrested Thursday, July 10, and spent the night in the Hughes County Jail in Pierre.

Attorneys at the hearing mentioned the tribe’s financial difficulties.

Hawk, who is 50, hired Sargent earlier this year to defend him against federal charges of sexually assaulting a young woman in Fort Thompson, to which he pleaded not guilty in April. That charge carries a top sentence of life in prison if he were convicted.

Duffy told him on Friday that he was being held for now by U.S. marshals because a related sex assault charge out of Las Vegas, Nevada, involving the sister of his alleged assault victim in Fort Thompson has become, “very recently,” an extraditable offense.

That means if the federal court in South Dakota releases him pending further disposition on the embezzlement charges, Nevada authorities could come and take him to Las Vegas, Duffy told Hawk.

The Nevada charges against Hawk had until recently been “non-extraditable,” meaning Nevada authorities could only take him into custody if he was in Nevada.

The three attorneys appeared with their clients in court in Pierre on Friday.

Before the hearing began at 10:02 a.m., a U.S. marshall loosened each defendant’s right hand from handcuffs for the proceeding.

Duffy told the four she entered routine not guilty pleas for them for the initial appearance.

The magistrate judge released the three women on personal recognizance bonds, ordering them not to discuss the case with each other.

Fischer, attorney for Middletent, asked Duffy if it was OK that the three women worked in the tribal financial offices in the same building in Fort Thompson.

Duffy said she would leave it up to the tribe’s discretion as to what the three women’s job duties would be in light of the federal embezzlement charges.

Middletent, who is 55, served from 2016-2018 on the tribal council, when Sazue, now 62, was chairwoman of the council. Pease, 34, works in the tribal financial offices with Middletent and Sazue. Hawk is tribal treasurer.

She also is pregnant, which was mentioned by prosecutor Jehangiri as a possible issue because she likely will be on maternity leave from her job in the tribal finance office. Jehangiri said he did not object to the three women being released to possibly work again in the same jobs, leaving it up to the tribal government to oversee them.

“They may be fired,” Jehangiri told Duffy.

After the hearing, Tribal Chairman Thompson released a statement about the case: “Action is being taken by me in accordance with policies and procedures of the Crow Creek Sioux Tribe pertaining to the three tribal finance employees,” he said, referring to Sazue, Middletent and Pease.

As to Hawk, who is tribal treasurer and one of seven elected members of the tribal council, Thompson said: “Due to the severity of the current charges, I am placing the council member on indefinite suspension without pay until definitive action is taken by the sitting council in accordance with the (tribal) constitution and by laws of the Crow Creek Sioux Tribe.”

Thompson told the Capital Journal that the tribe has about 3,500 enrolled members, and about 2,300 of them live on the reservation that stretches on the east side of the Missouri from about 30 miles southeast of Pierre to about 30 miles north of Chamberlain.

Duffy told Hawk she was going to keep him detained in U.S. marshals’ custody in South Dakota — perhaps in the Hughes County Jail in Pierre — because of the outstanding sexual assault warrant from Nevada.

If his attorney, Sargent, “can get that warrant extinguished, you can ask for release,” Duffy told Hawk.

After the half-hour hearing, Sazue, Middletent and Pease were told their families could pick them up at the Hughes County Jail over the noon hour.

Halona Hall and Leatrice Seaboy attended Friday’s hearing in Pierre, saying as tribal members from the Big Bend district of the Crow Creek reservation, they have a stake in the news and the case.

“We figured it was going on all the time,” Hall said of the alleged embezzlement.

“I go to every Council meeting,” Hall said. “They’ve got too many people working.”

Seaboy said that every Indian reservation faces the same problems, but that it’s been too obvious for too long at Crow Creek that mismanagement and worse had meant money going where it wasn’t supposed to go.

“”When you control the money, you control the people,” Seaboy said. “The tribal council controls everything — gaming, the school, IHS — because they sit on all the boards.”

Hall and Seaboy said Roland Hawk lived large, with expensive new vehicles and spreading his wealth out to friends and family.

The arrests made Thursday and others she and Hall have heard are coming, are encouraging signs that finally notice is being taken of the misbehavior by some Crow Creek leaders and employees, Seaboy and Hall said.

“We just need someone to come in and do something,” Seaboy told the Capital Journal.

She and Hall credit the new tribal chairman, Lester Thompson, Jr., who succeeded Sazue in April 2018.

U.S. Attorney Ron Parsons said Friday in a news release that the case is part of “The Guardians Project.” He said that’s a “federal law enforcement initiative to coordinate efforts between participating agencies to promote citizen disclosure of public corruptions, fraud and embezzlement involving federal program funds, contracts, and grants and to hold accountable those who are responsible for adversely affecting those living in South Dakota’s Indian Country communities.”

The Guardians Project includes the FBI, the offices of the inspector general for federal departments of the interior, health and Human Services, Social Security Administration, Agriculture, Transportation, Education, Justice and Housing and Urban Development; as well as the IRS, the U.S. Postal Inspector Service.