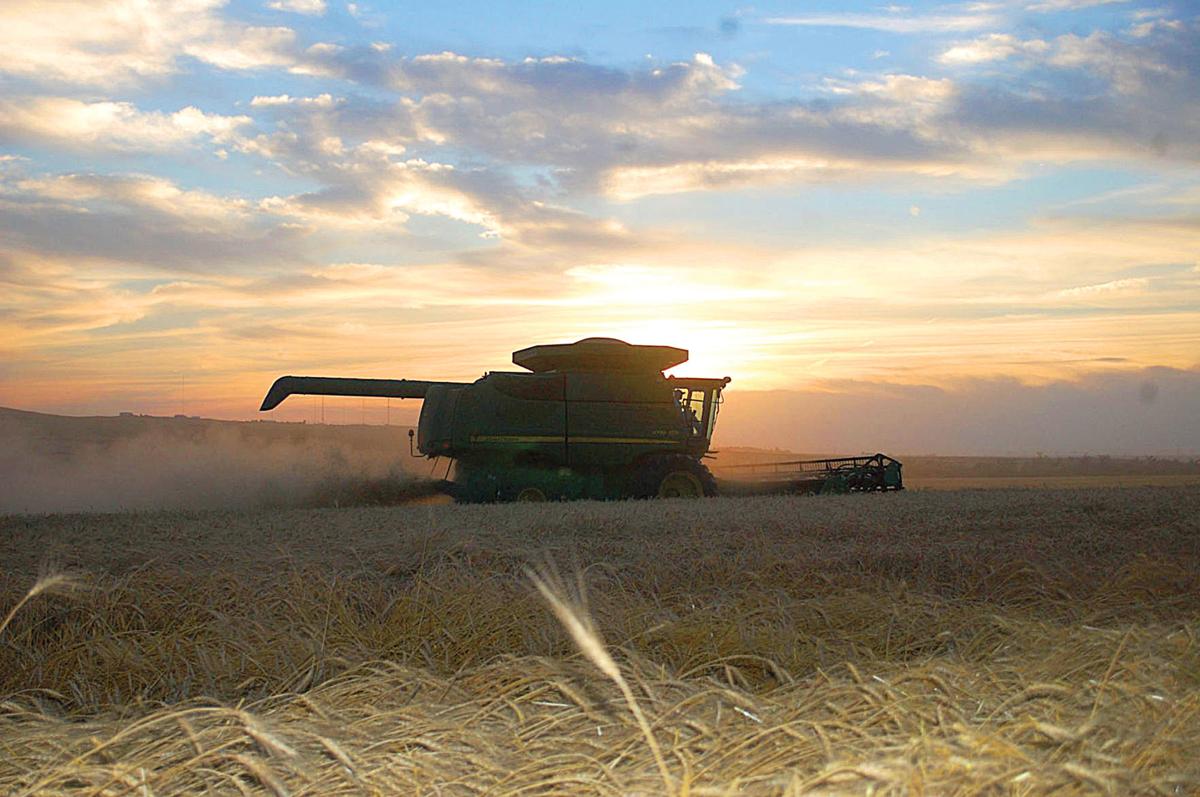 The agriculture industry accounted for 6.9 percent of 9.2 percent growth in South Dakota’s gross domestic product in the third quarter of 2015. The state led the nation in economic growth in that quarter of the year. 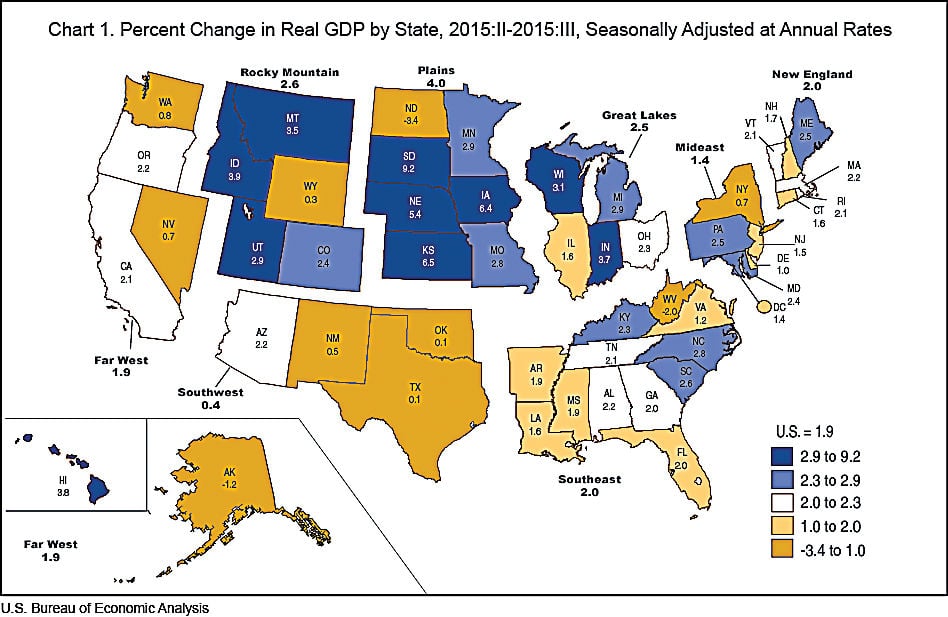 The agriculture industry accounted for 6.9 percent of 9.2 percent growth in South Dakota’s gross domestic product in the third quarter of 2015. The state led the nation in economic growth in that quarter of the year.

The new report from the U.S. Department of Commerce this week is all over the Wall Street Journal and, therefore, getting attention all over.

It seems to have lessons about the vagaries of the oil market that has fueled North Dakota’s amazing largesse for several years until recently, and on the steady truth of farming’s stability and how great it is to have the most pheasants in the world.

Nationally, it was retail trade that was the lead engine pulling the U.S. economy in the third quarter, which showed a slowdown to 1.9 percent annual growth from growing 3.8 percent in the second quarter, the Commerce department report says.

The report has kudos for South Dakota, which the Wall Street Journal calls – ignominiously – the “other” Dakota.

One broad sector is the big dog in South Dakota, according to the report: “Agriculture, forestry, fishing and hunting was the largest contributor to the state’s growth.”

"I was glad to hear the news that South Dakota posted the highest percentage of economic growth in the third quarter last year," Gov. Dennis Daugaard told the Capital Journal in an email. "This is thanks to the growth we've seen in agriculture and good performance in areas like finance and construction. By keeping taxes low and limiting regulations, state government has been fostering this kind of growth."

Meanwhile, North Dakota came in 52nd in the listing – all states, plus the District of Columbia and the total U.S. figures are listed - with GDP going down 3.4 percent in the third quarter, after a fall of 1.2 percent in the second quarter. That’s a big change from the third quarter in 2014 when North Dakota’s GDP rose 5 percent and was in the stratosphere in the second quarter of 2014 showing 18.8 percent growth.

Iowa is number three on the list, with GDP growth of 6.4 percent in the third quarter, following a second quarter of 2015 with 4.5 percent growth.

Montana is number eight on the list: 3.5 percent growth in the third quarter, 3.2 percent in the second.

Minnesota came in 11th, with GDP growth of 2.9 percent in the third quarter, following a robust 4.5 percent growth in the second quarter.

The report sums up: “Wholesale trade declined 5.8 percent in the third quarter after an increase in the second quarter of 2015. This industry subtracted 0.36 percentage point from U.S. real GDP growth and subtracted from growth in every state and the District of Columbia.”

“Mining declined 8.3 percent for the nation in the third quarter of 2015. This industry slowed growth in most mining states and subtracted more than a percentage point from real GDP growth in North Dakota, West Virginia, Oklahoma and Wyoming.”

The report says it uses gross domestic product, or GDP, as the measure of the economies of the states and the nation. “GDP is calculated as the sum of what consumers, businesses and government spent on final goods and services, plus investment and net foreign trade,” the report says.

The national economy grew at 1.9 percent in the third quarter, following 3.8 percent growth in the second quarter.

The state of Washington showed the biggest plunge, the Commerce department said, from 8 percent growth in the second quarter of 2015 to only 0.8 percent in the third quarter.

Texas, the nation’s biggest crude oil producer with more than 3 million barrels a day – about three times North Dakota’s output which is second highest among states – saw only 0.1 percent growth in the third quarter, after 0.5 percent growth in the second quarter of 2015, the Commerce department reported.

This isn’t a new story for South Dakota, of course.

In August 2014, The Economist magazine based in London published a story on South Dakota as a “neglected state” that was “quietly booming.”

“Quiet success might be South Dakota’s motto,” the erudite Economist reported. “It has no oil industry; its neighbor North Dakota, with its shale-oil boom, gets all the notice.”

Yet, South Dakota’s unemployment rate was 3.7 percent at the time, third-lowest in the United States. Leaving the state, as The Economist put it, “with a decent labour pool.”

The pool is a little shallower today than it was in mid-2014.

The unemployment rate has gotten better since (unless you are an employer looking for employees): the state’s unemployment rate was a super-low 2.8 percent in January, according to the state Department of Labor and Regulation, when the national rate was 4.9 percent.

Pierre’s unemployment rate was 2.5 percent in December, in the latest figure available from the state.

That meant that out of 8,270 people in the work force in Pierre, 8,065 were employed. It means civic and business leaders are working simultaneously to bring in more stores and businesses and also wracking their brains to attract more people to fill all the jobs.

Of course, amidst all this, the state also has the poorest places in the nation, including the Pine Ridge Indian Reservation, with unemployment as high as 90 percent.

The shift of the state’s economy to be more than just agriculture began more than three decades ago as financial services companies – including Denny Sanford’s – found South Dakota most congenial for credit cards and other banking things. The state has more bank assets than any state but New York.  The health care sector ballooned and Sioux Falls became a steadily growing economic center.

Matthew Diersen, extension economist and ag economics professor at SDSU in Brookings, said it’s important to keep in mind the latest report shows only the change from the second quarter to the third quarter last year, a pretty short three months.

The overall gross state product in 2015 was about the same as in 2014, $46.6 billion, with agriculture being around 20 percent of the overall economy, varying year to year, Diersen said.

While crop prices for farmers have been relatively unimpressive the past two years, low fuel prices and a rather surprising spate of record per-acre yields in several main crops in 2015 has and will bolster farm income into 2016, Diersen said.

“We are an energy consuming state, from a fuel perspective,” he said. So low gas prices are a spur to the economy, he said.

And high yields do a lot to mitigate the effect of low crop prices, creating a kind of "natural hedge," against low prices, he said.

The state's farm industry remains pretty diversified, with livestock accounting for about a third of total farm income year in, year out. So when crop prices are low, that increases profits for those feeding hogs, cattle and turkeys.