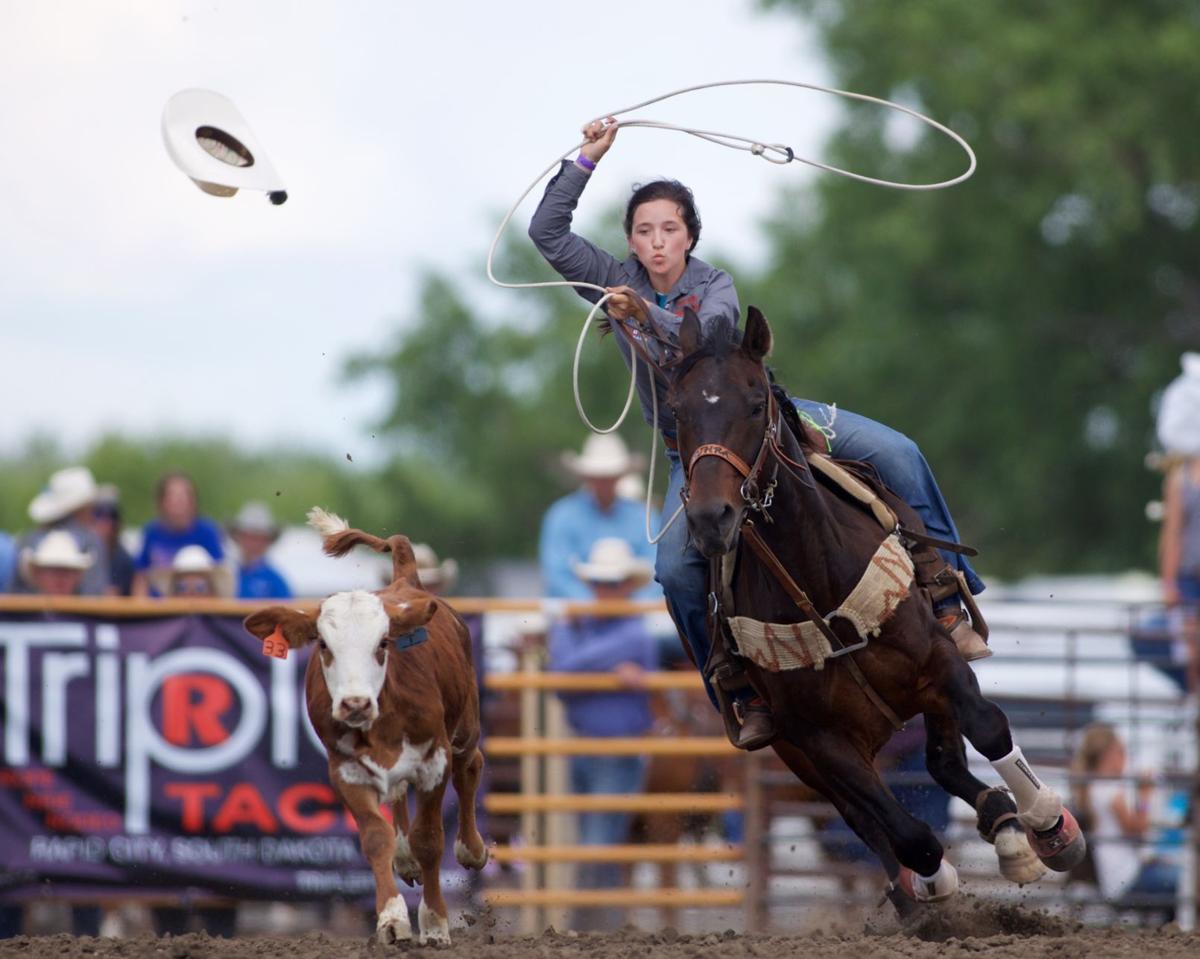 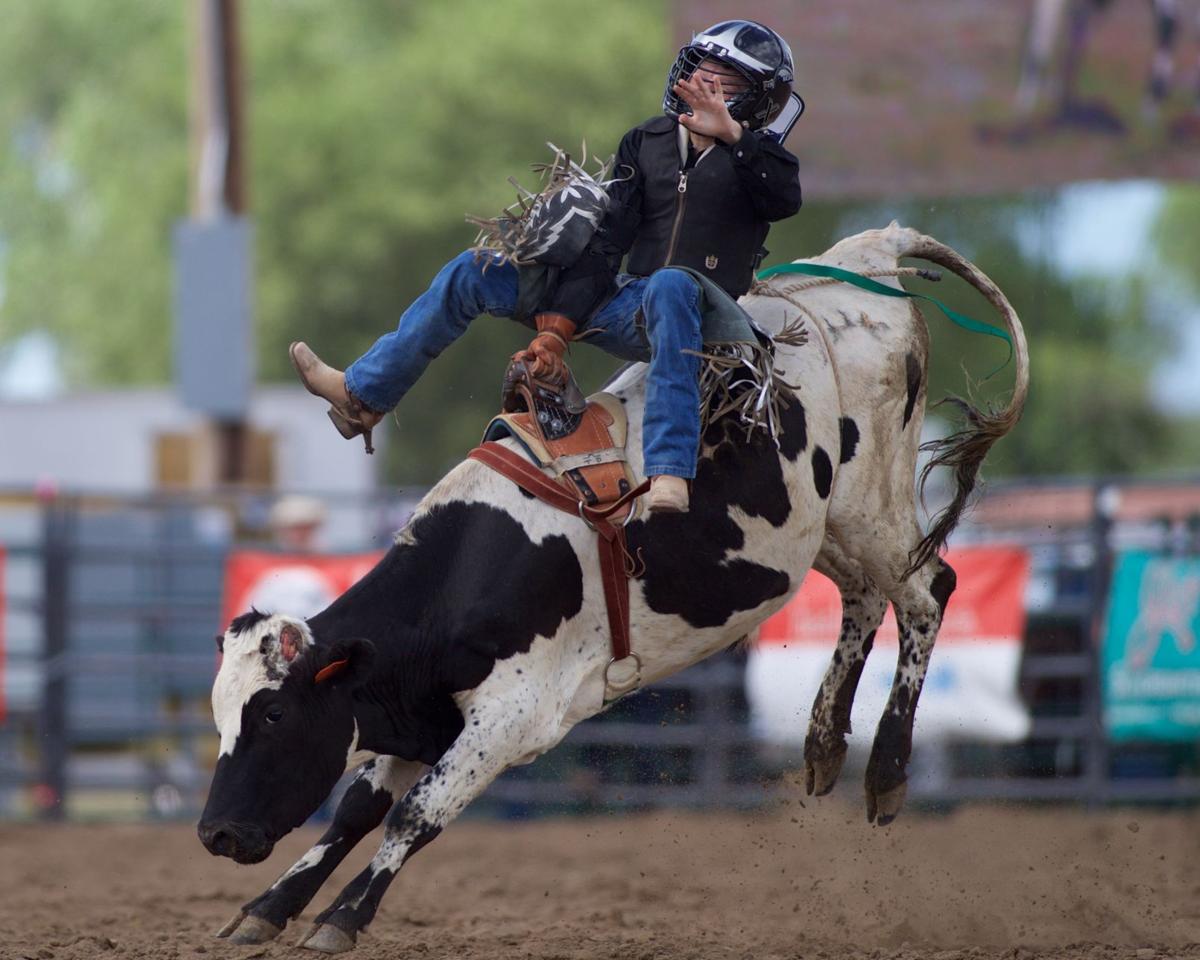 Their hats and boots might be a bit smaller than the other competitors, but it was the same cattle, same arenas and same judges looking on when the junior high school national qualifiers competed at the South Dakota High School Rodeo Association Finals at the Stanley County Fairgrounds June 20 in Fort Pierre.

Due to the pandemic, the National Junior High School Rodeo Association cancelled their national finals event, and for most cowboys and cowgirls in the country, it meant their show was over, but not in South Dakota.

The top four finishers who qualified to compete in the junior high nationals were invited to complete with the state’s high school kids.

“The Junior High Showcase will be held during the short round of the SDHSRA State Finals, Saturday June 20 at 4 p.m. in Fort Pierre, SD,” South Dakota Jr High Rodeo Association said on Facebook. “This is a way to feature these kids that would have normally made the NJHSRA National Finals.”

The entry fees were waived for the junior high entrants and they received a National Coat and prizes for placing, they announced.

Among the contestants were four Pierre kids from Georgia Morse Middle School, who thought their year was finished. Some will compete next year in high school, but the pandemic year has thrown many a monkey wrench into the idea of closure for kids across the nation.

All of them do more events than the ones they competed in Saturday. They are the events they qualified for too complete at nationals with, after season, or regional competitions because of the pandemic.

They basically went from home to the state finals.

They weren’t as prepared as they could have been, but showed up and did their best, and she was proud of all the kids, Taylyn’s mom Sherri Cass said.

“It’s just a really awesome thing that the high school invited them to come up here and be able to show off their talent in front of a large crowd and gain some experience in upper level competition,” Sherri said.

Taylyn said her favorite event to compete in is barrel racing.

“It’s really fun that they are having this today and that we can be a part of it,” Cass said. “Even with nationals canceled and COVID going on, they’re just trying to make it as normal as possible and I feel like they are doing a really great job.”

Martin has had her horse Whip-it since she was four and he can do just about anything including ranch work at home, she said.

Pole bending is an agility course where the horse races long-ways from one end to the other, comes back weaving through poles they must not knock over, weaves back down, then turns on the afterburner and hightails it back toward the start and end line.

To build up speed the teams, rider and horse, usually begin outside of the arena and take a long running start before tripping the clock to begin its timing.

Irving gave a great showing on one-eyed Jack for her pole bending competition. Despite Jack’s completely whitened left eye, they did not knock over a single pole and rode like the wind.

“It’s really cool that they gave us an opportunity to compete since we didn’t get to go to nationals,” Irving said.

Irving’s mom Joy Lashley said her favorite event to watch is the pole bending. Despite having done the event herself and grown up around horses, she still gets nervous when her Gabi does an event, she said.

“Well my anxiety level skyrockets,” Lashley said. “But I know she’ll do a good job. She’s clicked with her horse finally this year. They’re doing really good so I just try to remain calm and wish them the best.”

“We are all proud,” Rebecca Norman, Martin’s mom said for all the moms standing next to her They nodded in readily agreement.

Though only competing against his age group, it’s nice to see where they end up compared to the high school kids, Spencer said.

It’s pretty cool because not every state got to have their high school state finals either,” Spencer said. “The fact that South Dakota got to do it is pretty neat.”