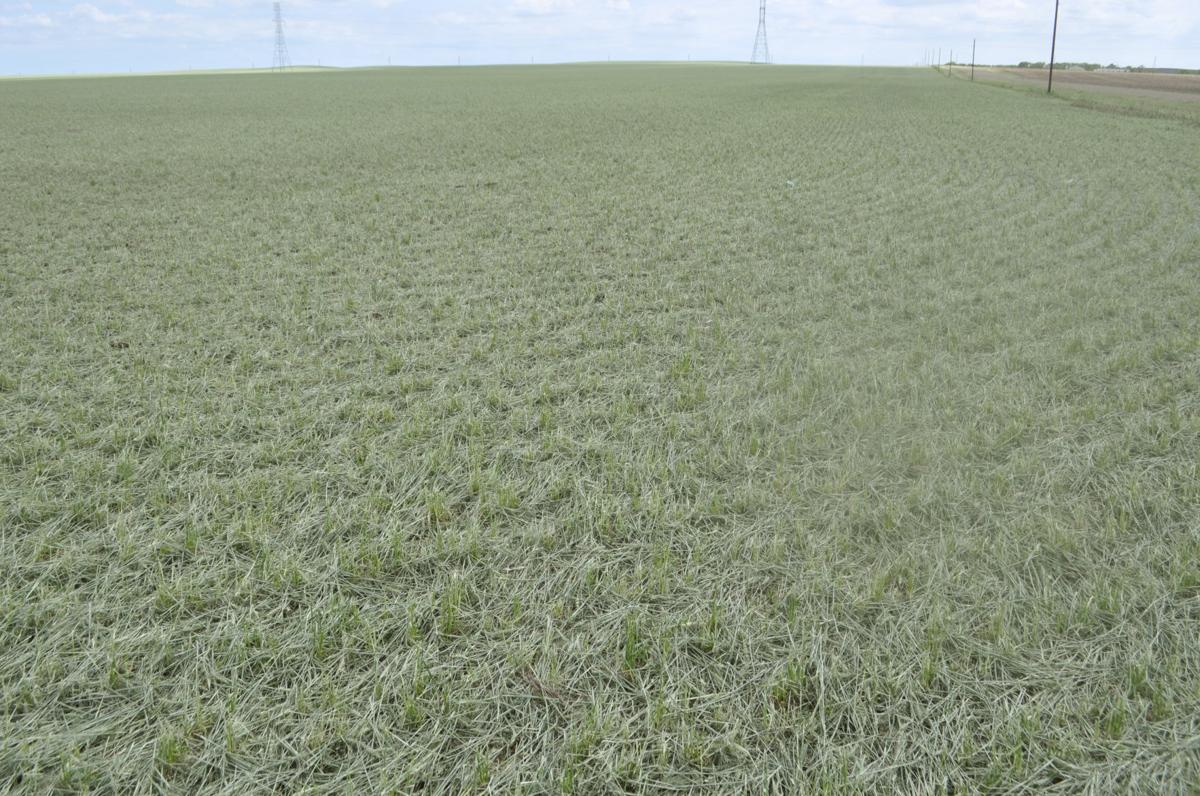 This spring wheat field  about 10 miles east of Pierre was destroyed by a hailstorm and high winds June 27. (Stephen Lee/ Capital Journal) 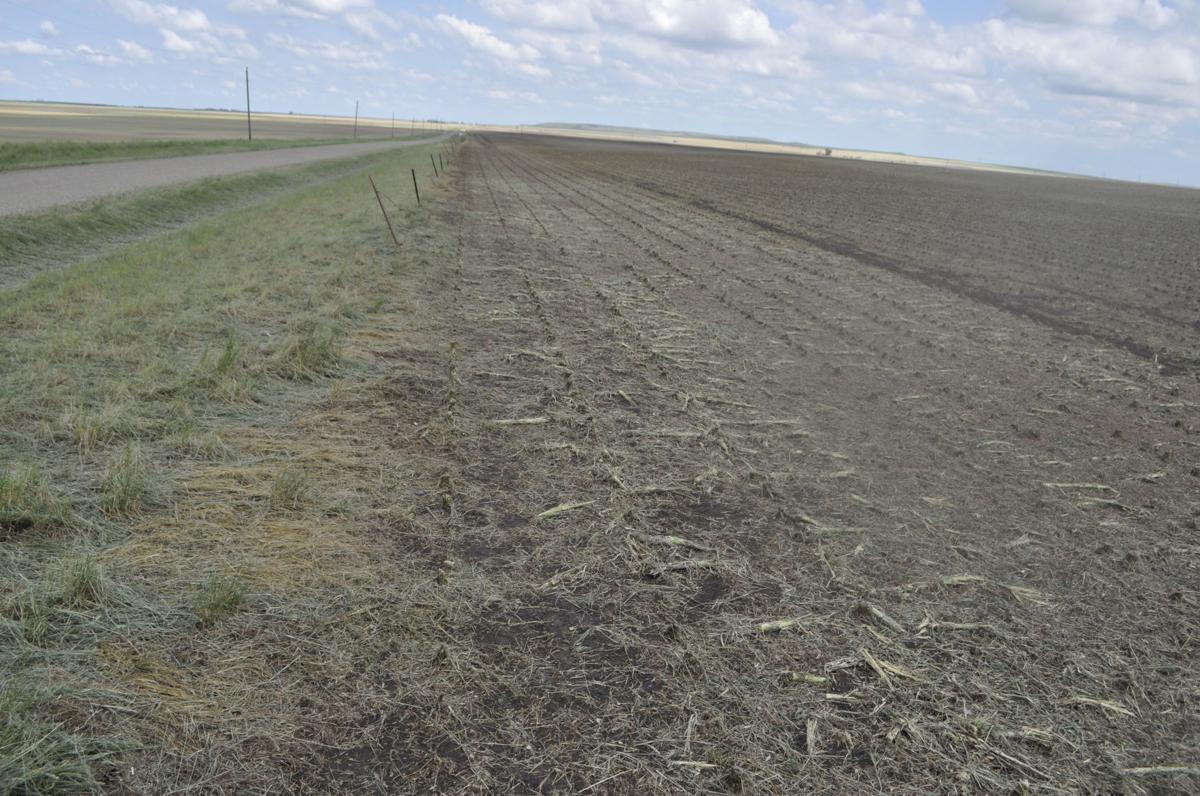 What appeared to have been a corn field was so fully destroyed by hail in a severe thunderstorm early Wednesday, June 27, about 12 miles northeast of Pierre it was difficult to tell what had been growing there.  (Stephen Lee/ Capital Journal) 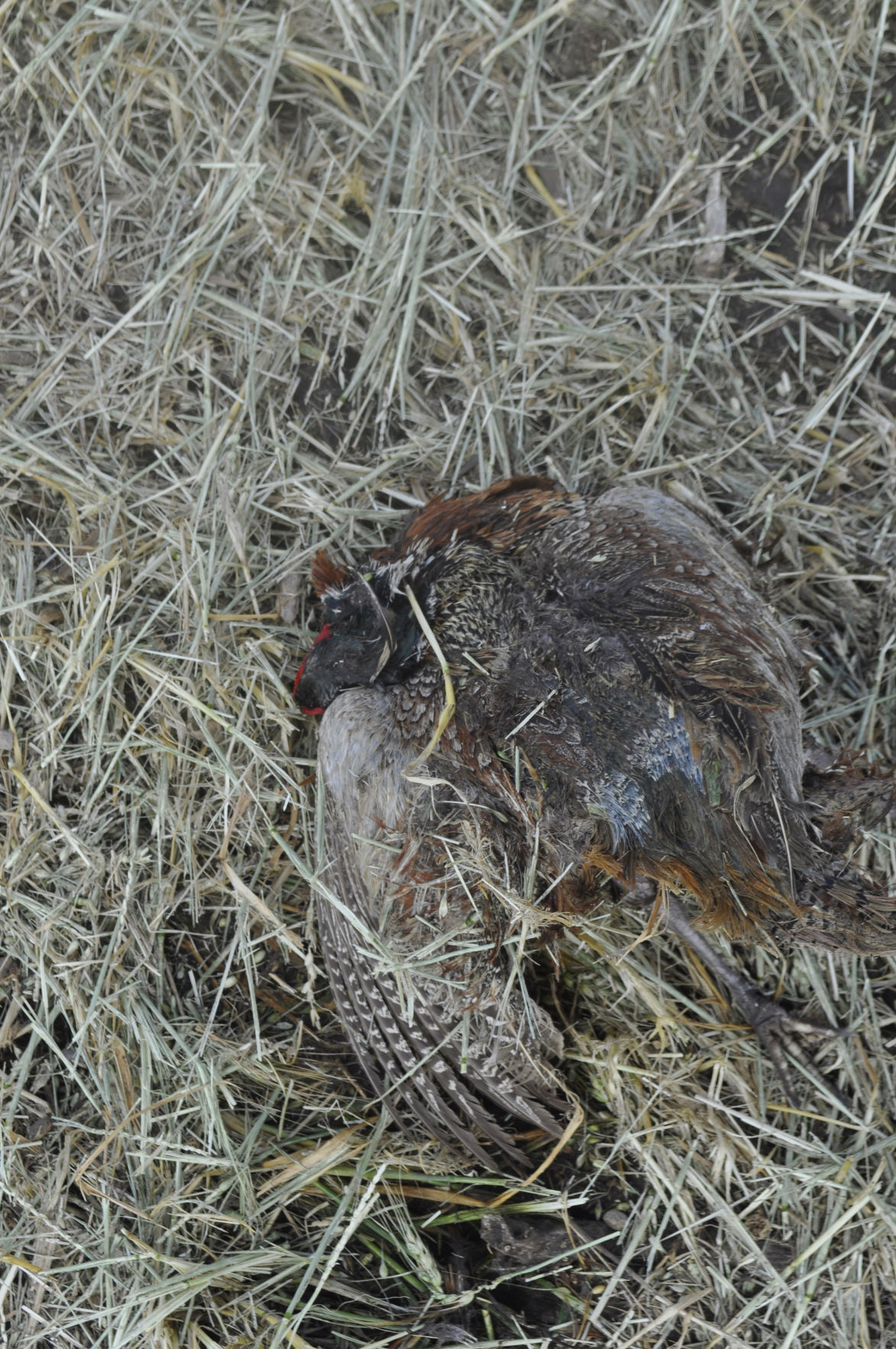 This ringnecked pheasant was killed by a hailstorm and high winds on Wednesday, June 27, about 11 miles northeast of Pierre. (Stephen Lee/ Capital Journal) 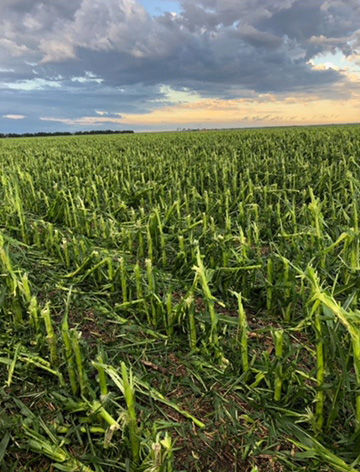 The corn field in western Sully County was cut down by the hail and high winds of the thunderstorm that hit the region early Wednesday, June 27. (Submitted photo) 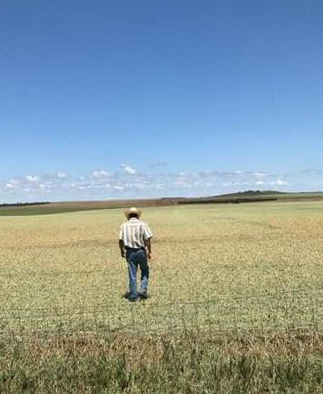 This farmer on the Bush farm in western Sully County was checking the destruction of this wheat field by hail, rain and high winds on Wednesday, June 27, north of Pierre, near Lake Oahe.  (Submitted)

This spring wheat field  about 10 miles east of Pierre was destroyed by a hailstorm and high winds June 27. (Stephen Lee/ Capital Journal)

What appeared to have been a corn field was so fully destroyed by hail in a severe thunderstorm early Wednesday, June 27, about 12 miles northeast of Pierre it was difficult to tell what had been growing there.  (Stephen Lee/ Capital Journal)

This ringnecked pheasant was killed by a hailstorm and high winds on Wednesday, June 27, about 11 miles northeast of Pierre. (Stephen Lee/ Capital Journal)

The corn field in western Sully County was cut down by the hail and high winds of the thunderstorm that hit the region early Wednesday, June 27. (Submitted photo)

This farmer on the Bush farm in western Sully County was checking the destruction of this wheat field by hail, rain and high winds on Wednesday, June 27, north of Pierre, near Lake Oahe.  (Submitted)

A quick-moving storm filled with hail, lightning, wind, rain and thunder slashed and destroyed crops and even killed birds and deer across 100 to 150 square miles mostly in Sully and Hughes counties early Wednesday.

“It was devastating” Jerry Sperry told the Capital Journal. He farms northeast of Pierre and looked incredulous himself as he surveyed damage Wednesday afternoon. “I lost half my crop. Some guys lost 14, 15,000 acres.”

He was stopped at the corner of 301 Avenue and 200th Street, about 10 miles northeast of Pierre. On each side of the road were wheat fields utterly hewn to the soil, making dead pheasants cocks -- 50 yards into one field, 100 yards into the field on the other side of the road — visible from the road as nary a wheat stem higher than an inch or two remained.

It wasn’t as if the wheat had been cut for harvest, leaving stubble. It was like it had been mowed with a dull blade, flailed, decapitating each wheat plant, leaving heads lying in the rows.

“Look at that little tree,” Sperry said of a shrub-like plant along the fence line. The leaves were stripped and even the bark was scraped, as if a buck deer in autumn had been working up a rut on it.

Even the grass in the ditches is butchered and won’t need mowing for months.

“There are dead fawns around,” Sperry said.

In one field, a blackbird looked like it had been dashed against the rock where its crumpled body lay on the edge of an ex- wheat field.

A half-mile from a dead pheasant cock, a hen cowered in the ditch, along a barbed-wire fence, apparently in distress, unable or unwilling to move, even with a camera only a couple feet away.

The punishing hail-filled thunderstorm hail cut across a wide swatch of the region early Wednesday with a path estimated at two to five miles miles wide and extending 50 miles or more from the Little Bend on the Lake Oahe/Missouri River north of Pierre to the southeast to the Big Bend in the River on Lake Sharpe near Fort Thompson.

Rob Fines, emergency manager for Hughes and Stanley counties, was out in the storm about 3:30 a.m., Wednesday, east of Pierre. “You couldn’t see the shoulder of the road,” he said. “It was white on the ground from hail. Dime to nickel-sized.”

He said the storm began in Bush’s Landing near the Little Bend on Lake Oahe north of Pierre and moved southeast, crossing U.S. Highways 14 and 83 about 10 miles northeast of Pierre and moving on to the West Bend Recreation Area on Lake Sharpe/Missouri River on the Lower Brule Indian Reservation not far from Fort Thompson. The storm’s path was about 50 miles long and two miles wide, Fines said. Some other observers estimated it was wider than three miles, at least in certain areas.

Rain amounts of 1.5 inch to 3 inches, heavy hail and winds up to 50 mph or more blasted crops and pastures and grass ditches “like a lawn mower,” Fines said.

The weather service received reports of 1.5-inch hail near Kennebec and 1.75-inch hail near Oacoma and wind gusts up to 58 mph near Harrold, 59 mph in Corson County and 62 mph in Buffalo County.

Pierre received a record amount of rain for the date on Wednesday, as 1.84 inch fell at the airport, breaking the previous record for June 27 of 1.12 inch set in 1955, according to the National Weather Service office in Aberdeen.

It boosted the total precipitation since Jan. 1 in Pierre to, finally, well above normal: 11.68 inches, 1.20 inch more than the 30-year average for the first 178 days of the year.

The storm wreaked havoc on buildings and vehicles, too.

Windows and siding on buildings were broken and damaged from hail, and some farmers had headlights broken on tractors and vehicles.

Like many farmers on Wednesday in the region, Sperry was waiting for a crop insurance adjuster before deciding what he might do, Sperry said.

He’s looking at a late-planting, short-season, early maturing variety of sunflower seed as a possible alternative crop for some of his wheat, corn and soybean fields that were destroyed.

She surveyed the damage while driving to Gettysburg for a previously scheduled field tour on Wednesday evening.

Where the main storm crossed Highways 14 and 83 northeast of Pierre about 10 miles, “it is really bad,” Beck said. “The wheat is just flattened.” Corn fields were cut off a few inches from the ground. Ditches looked as if they had had been mowed with a dull, but effective, blade; flailed to bits, as much as mowed.

Heads of wheat lay in rows without any plant left standing much above 1 or 2 inches above the ground.

Stanley County didn’t receive as much crop damage but heavy rains pushed water on and over some roads, as it did in Hughes County, said Fines, who issued flash-flood warnings for both counties early Wednesday which expired by late afternoon.

Jamie Huizenga, a crop insurance agent, was taking calls all day from clients looking for adjustments and possible claims. Crop insurance is administered as part of the federal farm program and one of the rules is that figuring losses after hail storms normally requires a 7-day waiting period to see if any of the crop recovers from the hail damage.

That clearly isn’t needed in this case in most fields, because the damage is so obviously fatal to the corn, wheat and soybeans, “they are not coming back,” Huizenga said. He’s hoping some exceptions can be made to program rules so that claims can be processed more quickly, he said.

What farmers can do now will depend in part on what pesticides they had applied to their fields, because every crop doesn’t work with every pesticide, Beck said. While it’s too late to replant crops for grain, save maybe for some sunflowers, farmers can plant forage crops, which now have good moisture to provide late season grazing and hay, she said.

“And there’s always winter wheat,” she said, which is planted in September and early October for harvest the next summer.