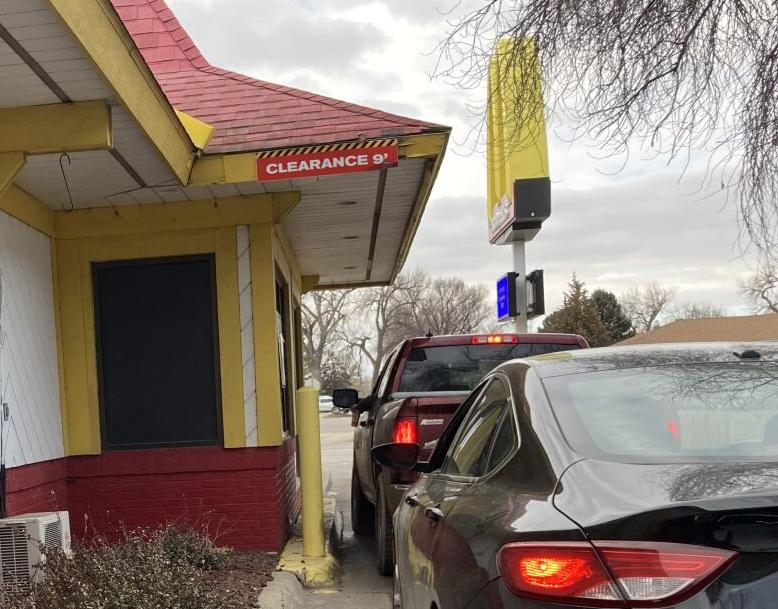 The pandemic has meant most fast-food restaurants in Pierre have closed their dining rooms. The result: Long lines. This one was at McDonald's on Wednesday. 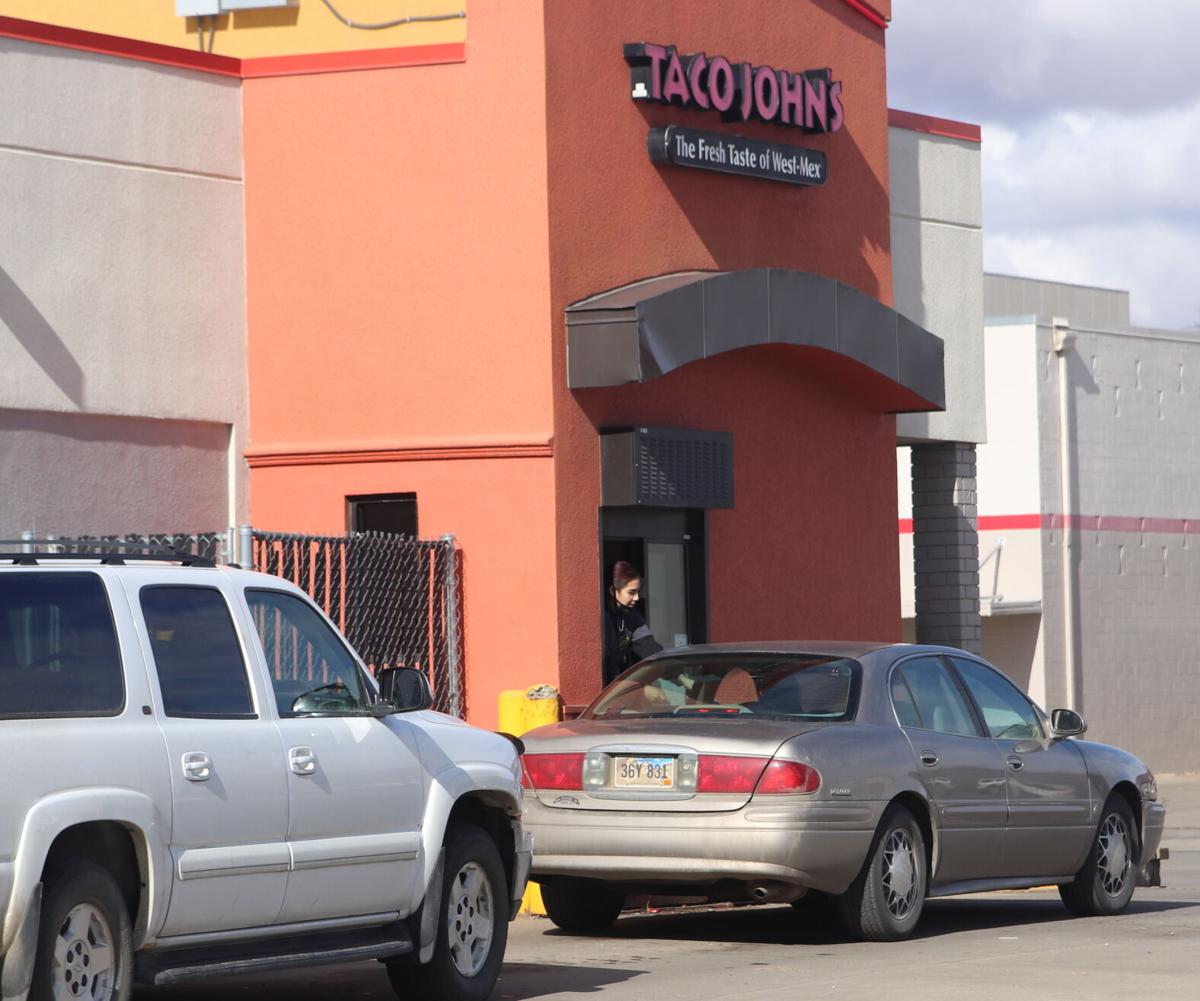 Cars line up outside Taco John's in Pierre on Wednesday.

The pandemic has meant most fast-food restaurants in Pierre have closed their dining rooms. The result: Long lines. This one was at McDonald's on Wednesday.

Cars line up outside Taco John's in Pierre on Wednesday.

Somebody was applying to work at the Arby’s he has managed for nearly four years in Pierre and wrote down that he’d stayed at his most recent job all of three days. He even put down a reason for leaving: “Not feeling it.”

He didn’t get the job — not even an interview — but Brown can’t always be so picky.

The fast-food business in Pierre is tough when it comes to hiring. Employees routinely bail in the first two weeks; turnover is high; and better starting pay, basic benefits and the prospect of earning more as a manager don’t seem to be a draw.

“It’s really hard attracting good employees,” Brown said. “It’s too easy to live off the government now. Unemployment, housing, food stamps — they can get it all. As soon as you get a job, you lose those benefits.”

“It’s like they don’t have that drive,” he said. “They expect it but they don’t work to earn it. You have to put in the effort.”

He said the starting pay of $11 an hour is higher than Arby’s in Sioux Falls and Rapid City but it’s still not enough to keep many employees more than a couple of weeks.

“It’s not doing it, and a lot of people say they need more money. It seems like people, after their first paycheck, they start to become unreliable.”

Brown needs 18 to 25 employees to be fully staffed. Last week, he had seven, including himself.

It’s a national problem, and getting worse.

By the numbersBest estimates among fast-food industry experts put the annual turnover rate at 150 percent or more. That means every employee is replaced, then half of the replacements are replaced, every year.

That’s a number that is increasingly getting the attention of the industry because turnover costs money. It’s measured in the cost to hire and train a new worker and the time it takes the new employee to become proficient. Then there is the jolt to the team caused by the revolving door.

But the industry could be creating its own problems. There are just over 204,000 fast-food restaurants in the United States and 4.8 million workers, according to industry estimates and Bureau of Labor Statistics numbers. But new stores are going up quickly, putting even more pressure on the industry to attract and retain workers.

That’s a constant in Pierre. Online job boards — from Indeed to GlassDoor — are jammed with listings from nearly every fast food restaurant in town. Some restaurants constantly advertise for workers. Several didn’t want to be interviewed for this story.

According to the South Dakota Department of Labor, just 235 people were out of work in Hughes County in December, and 50 in Stanley County.

“They go up and down the street to any of these fast-food places and can get jobs,” Brown said.

Jamie Seiner, the outgoing CEO of the Pierre Chamber of Commerce, said the tough hiring situation is common among all restaurants, not just fast food, along with other industries.

“It can end up being a pay war,” she said. “The retailers deal with it, too.”

She said the chamber doesn’t focus on any single industry but offers support and tools to train leaders and managers and showcase job openings. She agreed that what Pierre is seeing is the cost of having a low unemployment rate.

“We need more people to move to town,” Seiner said. “More competition would help some of that.”

If good employees go job-shopping and come up with a better offer, Cody Cruse said he’ll consider offering more money to get them to stay.

Cruse has been general manager at Hardee’s in Pierre since 2015, and he’s feeling the hiring pinch, too.

“I have a pretty solid core crew but beyond that it’s pretty tough,” he said. He has 12 employees and needs 16.

While some of his workers have been there for years, others “just aren’t willing to stick it out. A lot of people start and quit real quick.”

Starting pay has gone up the past couple of years — $11.50 per hour for somebody with experience, more than $2 above the state’s minimum wage of $9.45.

He’s also willing to give second chances, or more, for employees who’ve quit and want to come back.

“We’ve given quite a few people a second, third, fourth chance. It depends on what they did,” he said.

What he can’t compete against is the government, Cruse said. Some employees have walked away because they make more sitting at home living off public assistance.

Despite the hiring issues, he said business is good. Before the pandemic he estimates 75 to 80 percent of their business came through the drive-through. Today, with the lobby still closed, that has gone up and they’re making more than pre-pandemic. Nationwide, most fast food chains have seen increases in 2020.

Will Wilson lives in Texas now but he’s not going to forget Pierre.

He was called in as a troubleshooter for KFC/Taco Bell when the Pierre store was in trouble in 2014. There were a lot of issues but the biggest was hiring and keeping good employees, he said.

“Most of the people who would apply were either down on their luck, had some kind of criminal history or something was wrong,” he said. “My son was really the only person who I could depend on to show up for work every day.”

Wilson said he needed three people to keep the store open and many nights it was just him and his son, who at 16 became the youngest shift manager in the company’s history.

“It got rough,” he said. “Work was just something to do temporarily. I had a lot of people who got their first paycheck and not come back.”

Wilson tried to address the problem. He doubled down on training new workers in the basics of the job so they wouldn’t feel tossed into a chaotic situation not knowing what to do. That helped for a while but wasn’t a long-term fix. Neither were higher wages or other programs designed to ease stress, he said.

He found himself lowering his standard for hiring “because I had no choice.” It wasn’t unusual to have the police show up during the employee’s shift to arrest an employee wanted on a warrant.

“It’s so hard because I don’t want to belittle anyone. We all go through our trouble and strife in life, but the big thing in Pierre was not being able to get good people and get them to come into work.”

The completion of the Dakota Access Pipeline in 2017 didn’t help either. Wilson said sales at their restaurant in Bismarck, N.D., dropped 50 percent and his store went from bringing in $25,000 a week — considered low — to just $13,000.

“When the pipeline stopped running, so did business,” he said.

The store closed in 2017, and Wilson moved on to another market. Today, he works for Popeyes fast-food chain after getting laid off by KFC/Taco Bell as the pandemic took hold last year.

He loved living here, “But Pierre really let us down.”

He doesn’t see the chain coming back to town.

“They don’t see it as a profitable place,” he said. “It’s not the customers’ fault for wanting good service, but when you were working the way we were, you just can’t meet that expectation.”