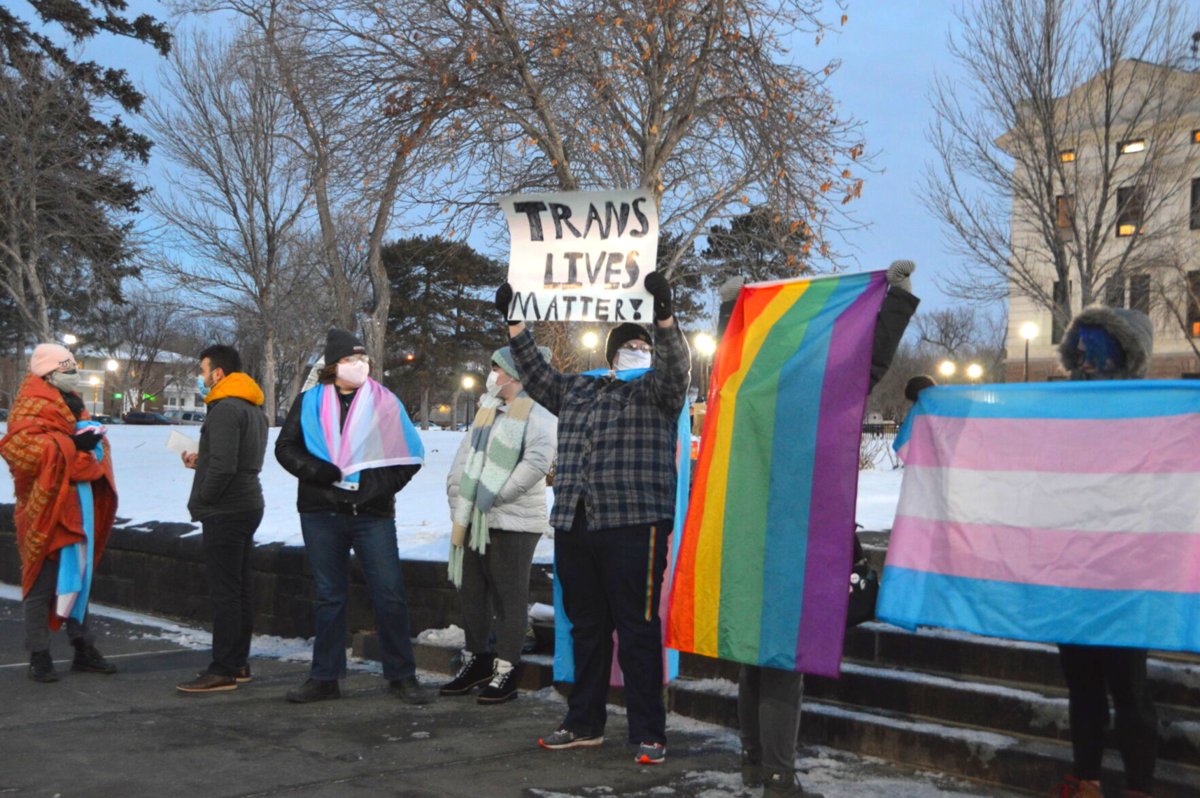 Protesters opposing South Dakota House Bill 1076, which would prevent people from changing their sex on their birth certificates, stood outside the State Capitol Tuesday morning. 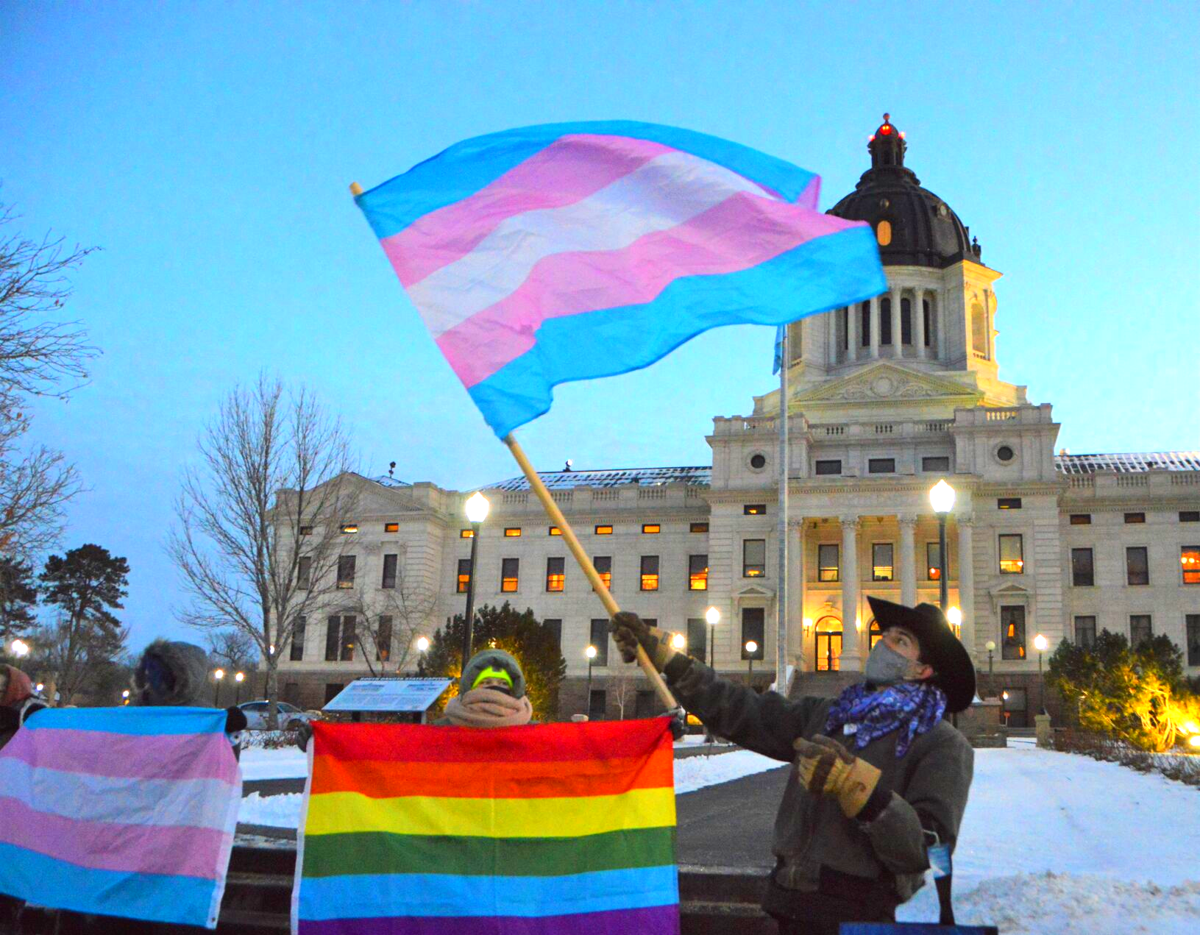 Protesters opposing South Dakota House Bill 1076, which would prevent people from changing their sex on their birth certificates, stood outside the State Capitol Tuesday morning.

A bill that would restrict South Dakotans from changing their sexual identity on their birth certificate that was killed in committee on Tuesday will now be making its way to the Senate chamber.

“It’s really a futile attempt to go against the grain on this and it’s going to harm South Dakota in many ways. We’re going to lose in court; we’re going to lose business investment in our state; we’re gonna lose talented individuals,” Rep. Jennifer Keintz, D-Eden, said Tuesday regarding House Bill 1076.

“The movement over the last few years is clearly not in the direction that South Dakota is trying to take this,” Keintz added.

The South Dakota House Health and Human Services Committee effectively killed HB 1076 in committee Tuesday morning, a bill that would require birth certificates to reflect a person’s biological sex. However, the House of Representatives brought it back to life in a smoke out, and on Wednesday voted 39 to 31 to pass the bill onto the Senate.

A smoke out is an act that invokes Joint Rule 7-7, allowing one-third of House members to require a committee to deliver a bill to the full House by the next legislative day.

The bill was previously defeated 7-6 in committee, but also tabled in a 7-6 motion to move to the 41st day of session, with opponents saying the bill is discriminatory toward transgender people.

Officials believe about 11 people have updated their sex on their birth certificates in the state since 2017.

Opponents gathered outside the State Capitol building prior to the committee meeting to protest the bill. Sarah Kanz of Pierre came out to protest because Kanz believes transgender people should be able to put whatever sex they want on their birth certificate.

Waving a trans flag high in the air, Wichpi Luta of Parade, South Dakota also took part in the protest.

“Those legislators in there think they can take people’s civil liberties away when it suits them and then not do it to protect us. I don’t know what that’s about, but they need to know we exist. They should stop wasting their time with bills like this so they can get` some stuff done. I hear they have several billion dollars to spend,” Luta said.

Bill sponsor Rep. Fred Deutsch, R-Florence, argued the legislation is important to ensure vital records and statistics are accurate and to resolve issues judges are experiencing when someone requests a sex change on their birth certificate. Deutsch said sex is determined by biology and is permanent.

The bill would only allow people to change their biological sex on their birth certificate after the first year of life if there was a clerical error in the data reporting or if congenital birth defects make determination of sex difficult.

Deutsch said the court system is having issues with uniformly applying laws to either grant or deny a sex change on a birth certificate, and provided examples of correspondence between Circuit Court Judge Douglas Hoffman and a so legislators can see “firsthand” the difficulties some judges face in interpreting the law.

Deutsch went on to say that gender is a matter of the mind, whereas sex is a matter of genetics and biology, unable to be changed by hormone replacement therapy or sex reassignment surgery. He said a clear, biologically based definition of sex will better allow the state to protect the health and safety of its citizens by being able to track disparities in socioeconomic inequality and disease susceptibility and treatment, to name a few.

“We understand that men die at a greater rate from COVID than women. Don’t you think it’s important to track that by biologic sex accurately?” he said. “Either biology matters in our state policies, or it doesn’t.”

Chris Motz of the South Dakota Catholic Conference testified in support of the bill, saying a birth certificate is not similar to a Facebook profile that can be owned and changed by an individual, but rather is an official public document.

Opponents of the bill argued that it would cause harm for transgender people and also negatively impact the state as a whole. Kooper Caraway, president of the South Dakota Federation of Labor, testified that not only is proper identification a fundamental human right, but also an economic issue.

“If we look across the country, anytime states have seen to take some of these more culture war issues and take hard stances on these things that seek to limit individual liberties and personal freedom, businesses pull out. Events pull out,” Caraway said.

Caraway said there are many other, more important issues facing South Dakotans today and the Legislature “waxing poetic” on personal liberties is “embarrassing.”

Roger Tellinghuisen, former South Dakota Attorney General, read a letter from the Human Rights Campaign’s legal director Sarah Warbelow in opposition to the bill, in addition to giving his own remarks on it. He said the bill is clearly anti-transgender, and the problem is nonexistent. Tellinghuisen cited Deutch’s letters from Judge Hoffman and said that is only one example and is not something the courts have to deal with regularly.

“In recent years, we see one of these types of bills every single year...focused on some of the most marginalized people in our society. We’re all God’s children, but to subject [transgender people] to this type of discrimination, in my opinion is just not fair. It’s unconscionable,” Tellinghuisen said.

Seymour Otterman, who organized the protest before the bill hearing, testified before the committee in opposition to the bill. Otterman is transgender and uses pronouns he, they, and it. He said the law was written without an accurate understanding of intersex and non-binary people, and that sometimes people simply do not neatly fit into either the male or female category. He also cited older women experiencing menopause or women who have uterus or breast removals, saying those women are still considered women.

“Why do we force transgender women to jump through these impossible hoops that many cis (cisgender) women can’t even jump through? There is no other group of people that has to change the gender marker on their birth certificate, and that alone is discriminatory. To remove us from even having that option is to make a mockery of us,” Otterman said. “This bill would prevent me from ever having a gender marker on my birth certificate that accurately reflects my gender or sex.”

Dylan Daniels also testified in opposition. Daniels is two-spirit and transgender. He described anxiety over making sure his identification documents matched up, as his paperwork could potentially deny him opportunities for advancement in his career or expose him to harassment.

“Like many transgender individuals, I’ve often experienced gender dysphoria that can arise from an incongruence of body and mind, but the day my birth gender marker was changed from an F to an M, the tension lifted a little and it was like things fell into place in a type of congruence that can only be described as euphoria. That M changed things for me in a profound way,” Daniels said. “To us, it is a message that we matter enough to have the same basic human rights and opportunities as anyone else, and it goes a long way in helping us feel a little more safe in an often unkind world.”

In his rebuttal to the opposing testimonies, Deutsch said the discussion is about sex, not gender, and that biological sex cannot be changed.

“I understand the people that struggle with their own human identity...frankly, there are an excess of 100 different genders — before a South Dakota court right now, there’s a young woman that is asking the court to change her sex on her birth certificate to non-binary, so it opens up a significant can of worms...we’re talking about biology...there’s significant differences between men and women,” Deutsch said.

Keintz and Rep. Erin Healy, D-Sioux Falls, opposed the bill. Keintz said federal government allows individuals to change their sex and that allowing South Dakotans to do so creates consistency.

“I’d like to put an end to the focus on the issues and get back to what really matters to South Dakotans,” Keintz added.

Healy said she has only seen 10 instances in the state since 2017 where people requested to change their sex on their birth certificates, and she said the small amount of data is “nowhere near” statistically significant to require a change of law. Healy said transgender people are just trying to live their lives, and she addressed transgender South Dakotans, telling them she accepts and supports them and is speaking on their behalf.

“I don’t think it’s our state government’s job to mandate identity. I find this legislation incredibly disrespectful. It’s incredibly disrespectful that we have to do this every year — it’s infuriating,” Healy said. “We’re not the ones who live this life every day. Why do we need to be in people’s businesses?...We are disrupting the lives of a vulnerable population.”

Healy said the committee is missing empathy and compassion and that the humanity of transgender people was not addressed in the committee.

“I felt like we were using birth certificates to weaponize trans people, and that’s just wrong. This is a dignity and humanity issue, and I understand they believe that you have a sex assigned to you at your birth, but I wish people had the empathy and compassion to understand that’s not how the trans community view their identity and their sex,” Healy told the Capital Journal after the vote.

Rep. Phil Jensen, R-Rapid City, motioned to vote on the bill. Healy motioned to move the bill to the 41st legislative day, and Keintz seconded. The motion carried, 7-6.

“If we keep saying the message, they’ll hear it eventually,” Otterman said after the vote.

“Either biology matters in our state policies, or it doesn’t."

The reality is simple - no matter how we surgically configure or condition a man to appear to be a woman, or a woman to appear to be a man we cannot alter the fact that neither can perform the God given function not originally assigned to them at birth. So, what’s the point in creating a fiction or worse, by altering their birth certificate. I don’t hold any ill will against these folks, but we don’t alter physical reality by pretending it’s something other than it is.