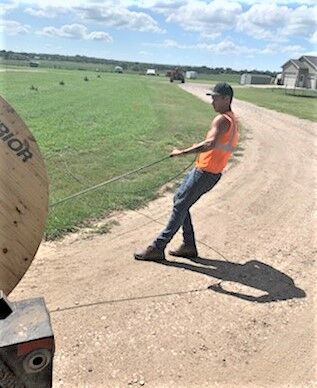 These Venture Communications signs were seen near a lot of rural homes in Hughes County last year as the Highmore-based company added about 425 customers by laying fiber optic cable to their homes to provided better broadband internet service. New grants mean Venture is planning a similar increase in customers this summer. 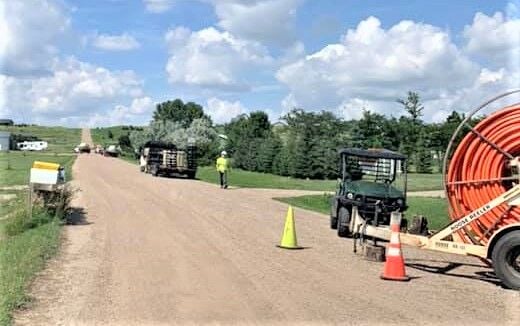 In summer 2019, crews from Venture Communications dug in fiber optic cable to many new customers in rural Hughes County, upgrading broadband internet access with the help of federal and state subsidies.

These Venture Communications signs were seen near a lot of rural homes in Hughes County last year as the Highmore-based company added about 425 customers by laying fiber optic cable to their homes to provided better broadband internet service. New grants mean Venture is planning a similar increase in customers this summer.

In summer 2019, crews from Venture Communications dug in fiber optic cable to many new customers in rural Hughes County, upgrading broadband internet access with the help of federal and state subsidies.

Another round of more digging and hooking up homes in Hughes County with fiber optic cable for better, faster internet and television service will follow Monday’s vote by the county commission.

The five-member commission approved the “application for occupancy on the right of way of county highways” by Venture Communications, which is headquartered in Highmore, 50 miles east-northeast of Pierre.

Crews from Venture will soon begin “plowing, backhoeing and boring” to put the cable along county roads and also to “bury” it right up to homes which have signed up for the new service, according to company officials.

It will be a continuation of similar work done across much of Hughes County last summer,  Rod Kusser, member services manager for Venture Communications, told the Capital Journal.

The work also becomes part of a statewide effort Gov. Kristi Noem began more than a year ago to improve service across the state. She said “half our counties have rural areas where one in four people don’t have adequate internet access,” in her state of the state address on Jan. 8, 2019.

It takes fiber optic cable laid out and buried to each home, which can cost $15,000 per mile.

Kusser said without government subsidies, there’s no way to make it affordable enough to attract customers to pay for the service.

But with the federal funding that comes through the state, it’s feasible, he said. "We are investing, too."

Venture's origins are in a rural telephone company started in 1952. It now covers much of east-central South Dakota, serving 30 communities, from Selby to Sisseton, providing digital cable TV, internet and phone service. Hughes County is as far west as the company stretches, Kusser said.

Last year, the state provided $5 million in funding across the state for upgrading broadband service mostly through laying fiber optic cable. Venture Communications got a share of that money and used it to add about 425 new customers in rural Hughes County, Kusser said.

That turned out to be providential, he said, when the COVID-19 pandemic hit early this year, ending the school year early. Those rural families now had broadband internet service that allowed school students to do their homework from home.

“We helped a whole bunch of folks through that COVID stuff,” Kusser said on Monday.

There are plenty of areas in the county outside the city of Pierre where cell phone service is patchy and it doesn’t provide internet access at the fast speeds expected now of customers, Kusser said.

Last month, Noem announced federal funds were coming into the state again for broadband upgrades, this time through the federal CARES Act, or Coronavirus Aid, Relief, and Economic Security Act.

The state Legislature in March approved $5 million for the continued broadband upgrades and the federal funding will buttress that.

Out of 14 companies approved last month for the new grants, Venture Communications is getting the most: $2,807,767.64 for expansion of the services in rural Hughes County, according to a news release June 24 from Noem’s office.

In total, the 14 companies are getting $11.5 million in grants approved for projects totaling more than $30 million in upgrades with the companies' inputs included, according to Noem’s office.

It depends now on how many people sign up to take advantage of the low price to the customer on the initial laying and burying of the cable up to a home, Kusser said.

“If they sign up now, the cost is nearly zero, 50 bucks or less,” he said. But if a possible customer waits, it will cost more to hook up a home later, similar to rural water expansions and hookups, he said.

“If we are as successful as last year, we hope to add another 300 customers plus,” in rural Hughes County, Kusser said.

Much of it will be in the Grey Goose and Spring Creek and Cow Creek areas north of Pierre, he said.