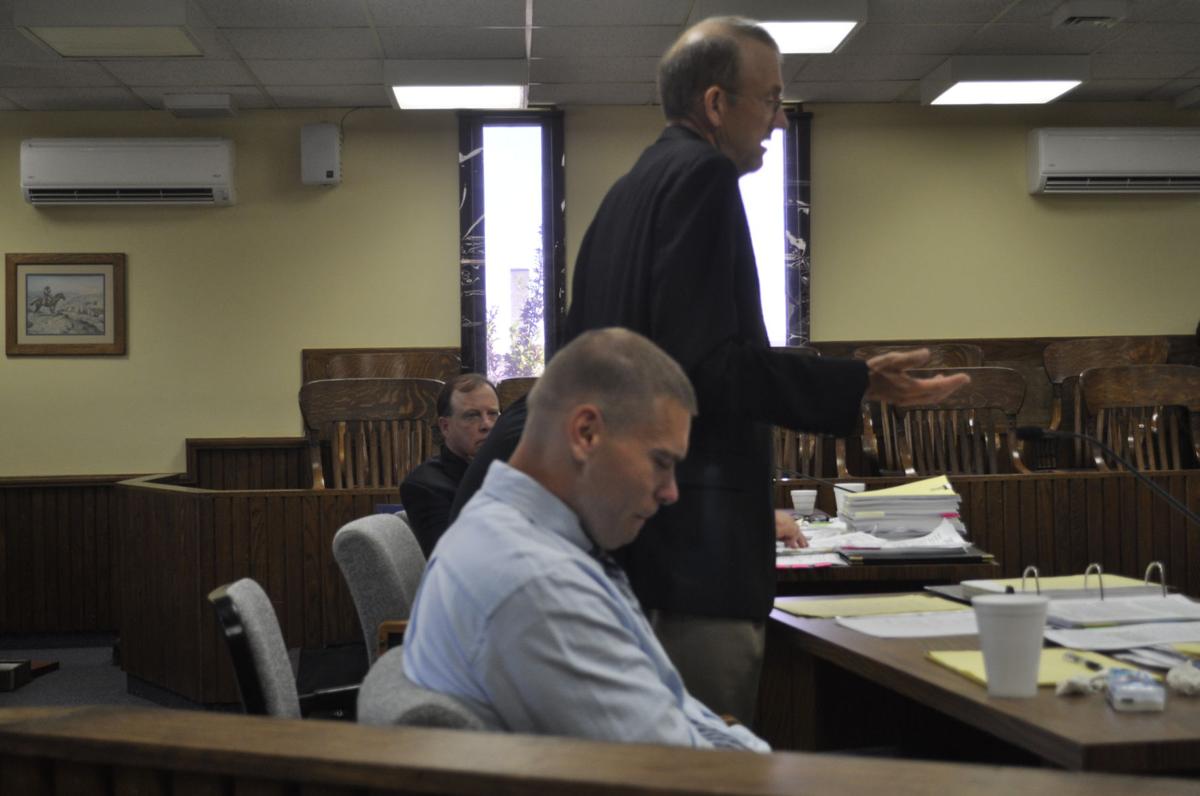 Sioux Falls attorney Jeff Larson argued Friday in his closing statement in a Fort Pierre court room that Paul Dean Jensen, foreground, deserved a lesser sentence than the life-without parole he’s been serving since kidnapping and murdering Michael Hare in 1996. Assistant Attorney General Robert Mayer looks on. State Judge John Brown re-sentenced Jensen, 34, to 200 years, which means he will be eligible for parole in five years. 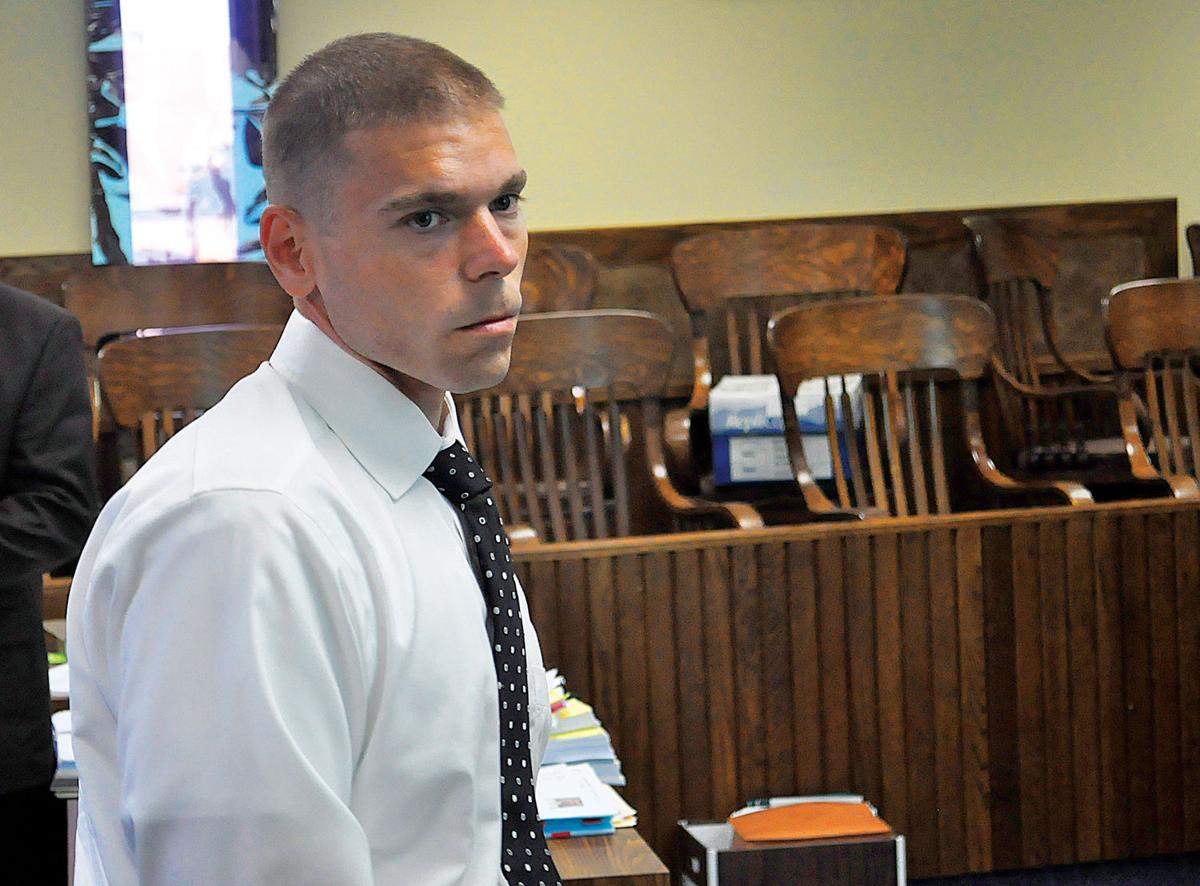 Paul Dean Jensen Jr, 34, is shown here in court in Fort Pierre June 2, 2016, where he was given a new 200-year sentence for his role in the killing of a taxi driver near Fort Pierre. (Stephen Lee/Capital Journal.)

Sioux Falls attorney Jeff Larson argued Friday in his closing statement in a Fort Pierre court room that Paul Dean Jensen, foreground, deserved a lesser sentence than the life-without parole he’s been serving since kidnapping and murdering Michael Hare in 1996. Assistant Attorney General Robert Mayer looks on. State Judge John Brown re-sentenced Jensen, 34, to 200 years, which means he will be eligible for parole in five years.

Paul Dean Jensen Jr, 34, is shown here in court in Fort Pierre June 2, 2016, where he was given a new 200-year sentence for his role in the killing of a taxi driver near Fort Pierre. (Stephen Lee/Capital Journal.)

The man who murdered Michael Hare outside a taxicab  20 years ago on a winter road outside Fort Pierre will be eligible for parole in five years, under terms of a new sentence pronounced Friday.

Under the “old system” of figuring prison sentences in South Dakota that changed just five months after Jensen executed Hare at close range with one shot to the chest and two to his head, Jensen  will be up for parole in the summer of 2021 under the 200-year sentence, court officers and a state prison official said.

Convicted of Hare’s murder and kidnapping, as well as stealing his yellow taxi and the $30.48 in his pockets, Jensen, then 14 but tried as an adult, was sentenced in November 1996 to the mandatory sentence for such a premeditated murder: life without parole.

Recent U.S. Supreme Court rulings, however, require states to offer re-sentencing hearings to anyone sentenced as a juvenile to such mandatory life-without-parole prison terms.

Under the old sentencing guidelines which changed in July 1996 - five months after Jensen’s offense which makes the old system apply -  a convict’s sentence was figured by subtracting upfront all possible “good time,” of five months to six months per year.

That means Jensen, even if he never wins parole, would be released in July 2097, assuming he doesn’t lose any of this time-off for good behavior already cooked into the new 200-year sentence and that he lived to the age of 115.

He’s up for parole in the summer of 2021, although the state parole board rarely grants parole on the first opportunity, court watchers say.

Jensen’s accomplice, Shawn Cameron Springer, was 16 at the time and pleaded guilty in 1996 to kidnapping Hare, receiving a sentence of 261 years. Springer lost an appeal of his sentence in 2013 and won’t be eligible for parole until 2029.

Hare's family members were not pleased with Brown's judgment Friday on Jensen's fate.

“It’s the worst sentence I’ve ever seen in my life,” Jamie Hare, Michael Hare’s older brother who is Walworth County state’s attorney in Selby, told the Capital Journal in an angry voice as he left the Stanley County courthouse after Brown’s ruling about 4:30 p.m., Friday. “It’s a travesty. I guess a human life doesn’t mean much. He gets up for parole in five years. That’s all I have to say.”

Jensen’s mother, Sherilyn Jensen, of Story City, Iowa, said, “We just keep dealing with it and healing. Pray and keep the light going,” she said. “I never expected him to walk out of here. We knew and everyone knew that wasn’t what would happen, or even what would be in Paul’s best interest. “

Her son, born when she was 16 and only weeks after her husband and his father, Paul Jensen, hung himself, needs a lot of help before he’s ready for any life outside prison, where he’s been since he was 15, she said. “He’s never even driven a car.”

Judge Brown said Friday while pronouncing the new sentence that nobody expected him to re-sentence Jensen to another life term. Although he said there would be a certain symmetry in giving Jensen the same 261 years his accomplice Springer received, Brown pronounced 200 years as Jensen’s new sentence.

About a dozen witnesses testified over the two-day hearing, including family and friends of Jensen and of Hare, as well as expert mental health experts for each side.

Jensen, in his court filings and through his attorney, Jeff Larson, argued that at 14, he was a victim off peer pressure and a dysfunctional family when he murdered Hare.

In his closing statement Friday, Larson said the U.S Supreme Court in recent rulings has said that juveniles who commit heinous crimes should not be judged by the same measure as adults and must be given a chance to show they have changed, become better people and amenable to rehabilitation and escaping from a life sentence in prison.

After Brown’s sentence was pronounced, Larson declined to comment, saying he never comments to the media on his cases.

Jensen, during his allocution, in which he could tell the court why he deserved a lesser sentence, asked Brown if he could turn and address Hare’s family.

Brown said he could.

Hardly able to speak, from his crying and taking gulps of air, Jensen said a few sentences between long pauses. “I don’t  really know how to begin,” he said, half turning to look at Hare’s brother and sister and others, unable or unwilling to look at them for more than a moment before lowering his head.  “I’m sorry. I don’t know what I can do. . . There’s nothing I can do. . . I can’t take back that day . .  I can’t give back Michael. . . I wish it would have been different.”

Despite saying this was his first chance in 20 years to express his remorse to Hare’s family, Jensen didn’t seem to have prepared much to say. He didn’t appear to have any written statement.  He attempted to rebut testimony from Hare’s sister and brother who said he lacked remorse and any concern for Hare or his family members and still posed a threat to society. Jensen said redemption is possible, even for him.

He stopped to take a drink of water, seemingly out of breath.

He spent time explaining why he hadn’t tried to contact Hare’s family and why he wrote the letter he did recently, a letter that was dismissed by Hare’s siblings during their testimony as too little, too late.

After about nine minutes, in which mostly he seemed to be searching for words or just finding the breath to speak, Jensen told Judge Brown he was finished with his statement.

During his closing statement, Maher said Jensen appears to be the same cold, callous murderer as he appeared in 1996, smirking at his arresting officers, refusing to tell them where Hare’s body was, denying he had a gun, more interested in his dog than in Hare.

“Shame on him,” Maher said. Maher said even on Friday Jensen didn’t seem able to admit what he had done, referring to Hare’s brother, Jamie Hare, addressing Jensen from the witness stand: “’Tell me that you murdered my brother, tell me that he’s a human.’”

Maher said in a dismissive tone about Jensen’s own statement in court: “Well, you heard his apology.”

Even in Jensen's recent three-page letter to the court, “He’s still blaming other people, his mom and sister were rushing him that night, that the victim caused his own death,” Maher said.

Jensen in 1996 and more recently, has said Hare wouldn’t stop moving toward him that night, so he shot him, as if it was Hare’s fault, Maher said.

While Springer acknowledged guilt back in 1996, “Paul was not remorseful and even today he has not demonstrated an acceptance of responsibility.”

Jensen will be kept in the Hughes County jail in Pierre until Tuesday when the next transport is available to return him to the state prison in Sioux Falls.

Dawnita Forell, the taxi company owner who dispatched Michael Hare to pick up Jensen and Springer Jan. 26, 1996 at the Days Inn in Pierre and who testified she felt like she had sent him to his death, shrugged about his new sentence, obviously not pleased.

“It is what it is. I just hope in five years he doesn’t get out and come back and kill me.”