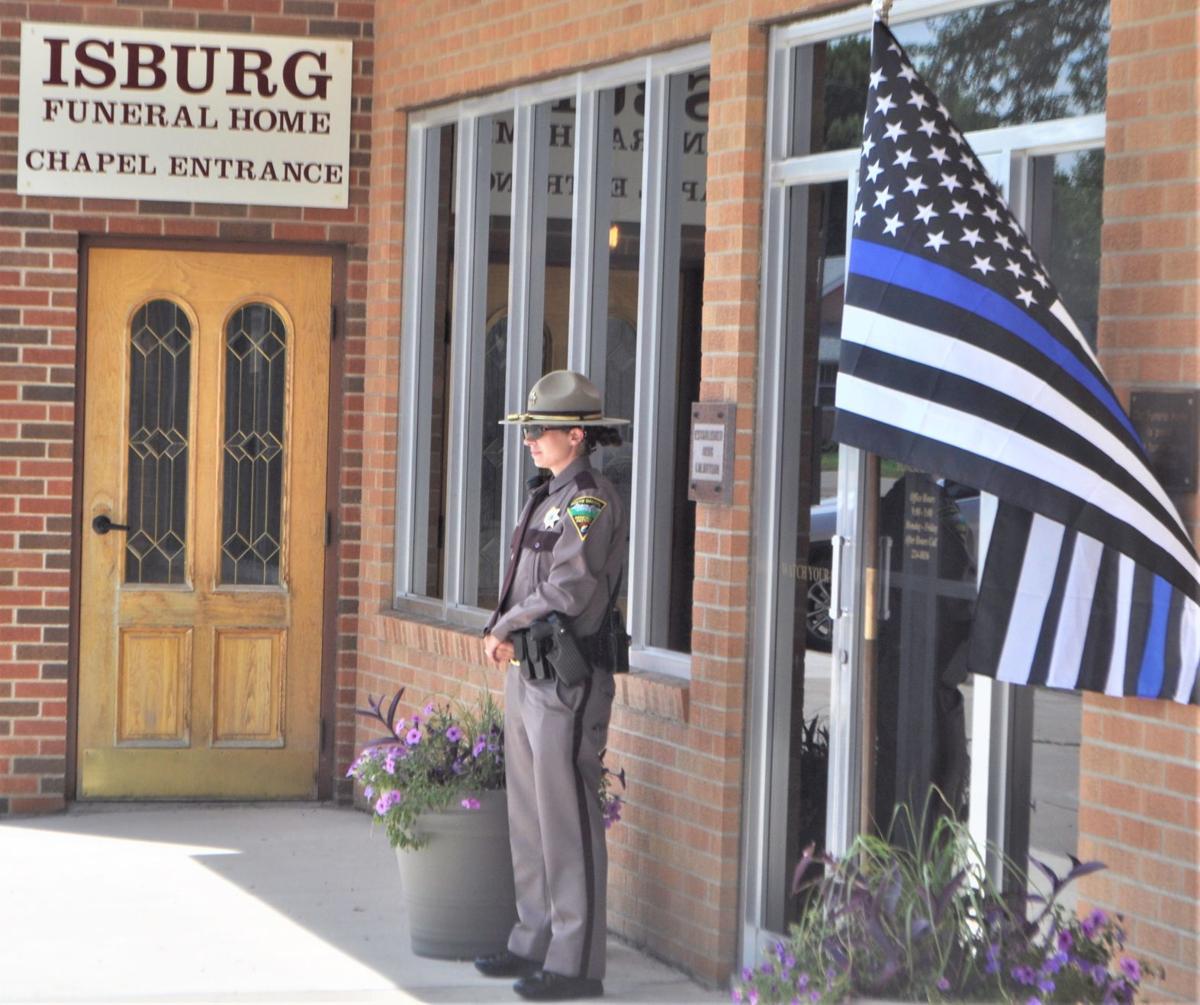 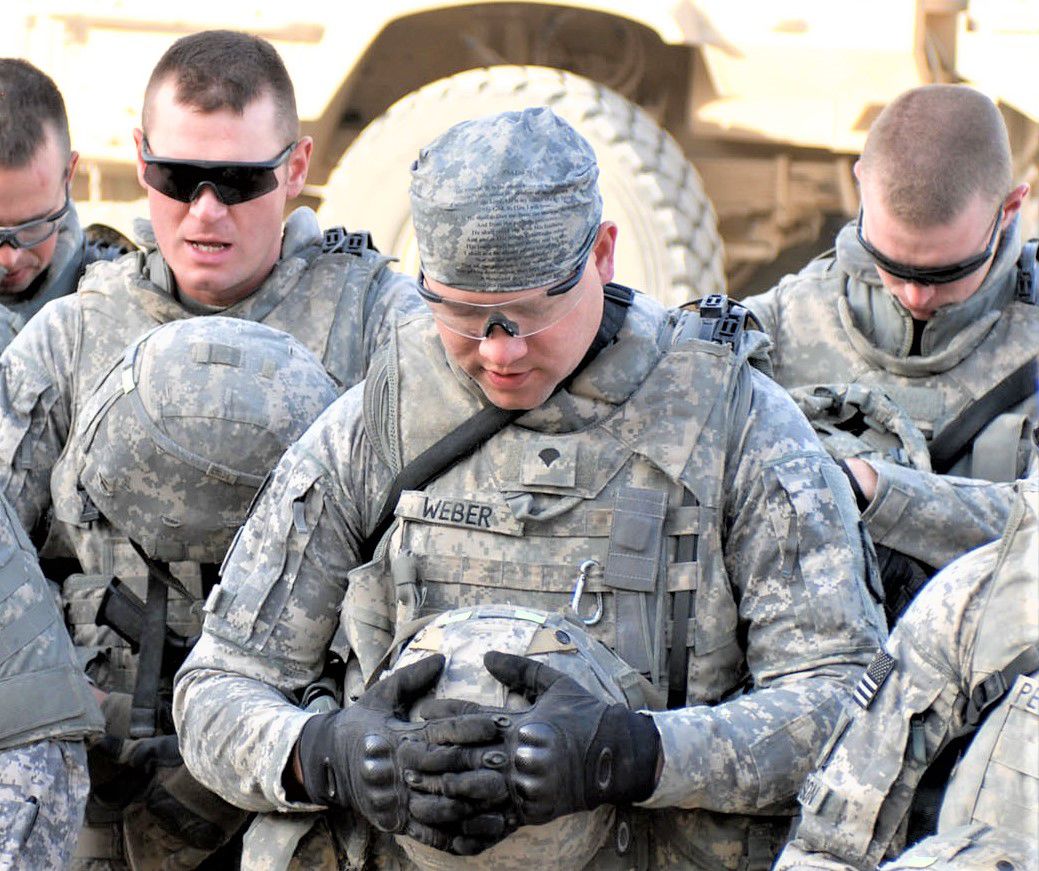 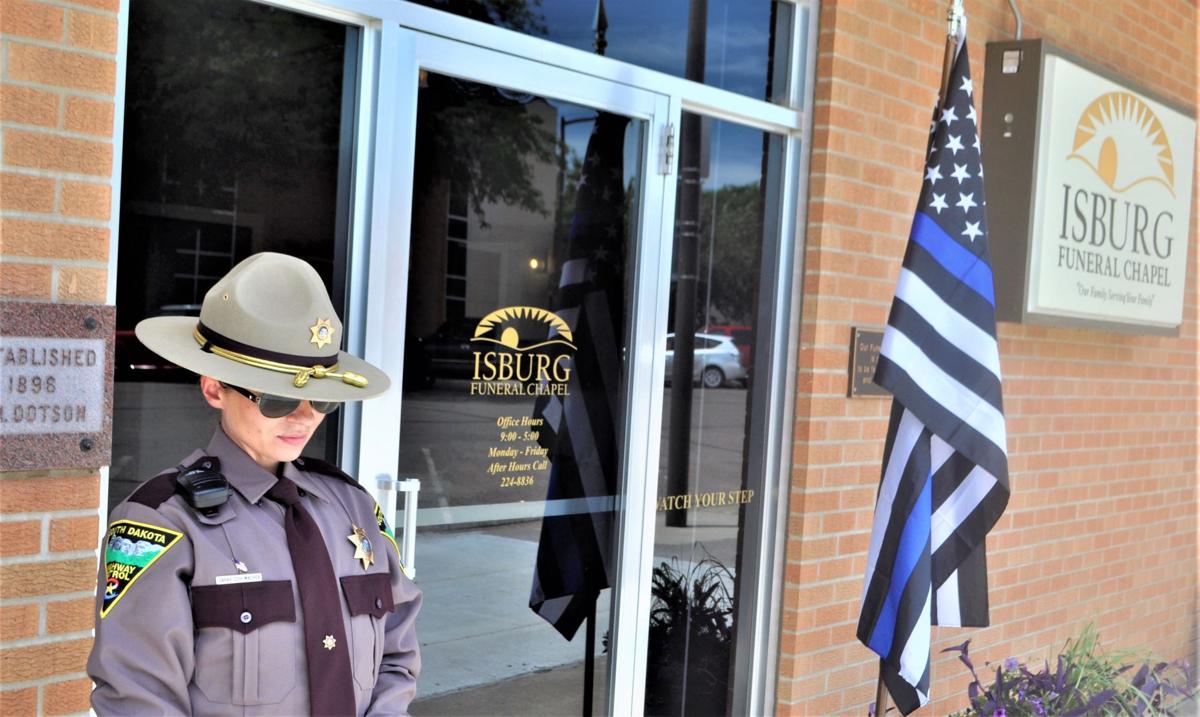 South Dakota Highway Patrol Trooper Sarah Schumacher stands "casket watch," on Monday outside the funeral home where Hughes County Chief Deputy Lee Weber's body rested. Dozens of other law officers and National Guard soldiers will keep the 24-hour watch until his funeral Thursday morning, July 16, in Steamboat Park in Pierre. Weber drowned July 3 rescuing his 8-year-old son who fell out of their boat on the Missouri River north of Pierre.

South Dakota Highway Patrol Trooper Sarah Schumacher stands "casket watch," on Monday outside the funeral home where Hughes County Chief Deputy Lee Weber's body rested. Dozens of other law officers and National Guard soldiers will keep the 24-hour watch until his funeral Thursday morning, July 16, in Steamboat Park in Pierre. Weber drowned July 3 rescuing his 8-year-old son who fell out of their boat on the Missouri River north of Pierre.

Law enforcement colleagues and fellow soldiers are standing on casket watch at the body of Hughes County Chief Deputy Lee Weber, who also was a staff sergeant in the South Dakota Army National Guard, until his funeral on Thursday in Steamboat Park in Pierre.

“We are keeping a 24-hour vigil,” said Highway Patrol Trooper Sarah Schumacher who was on duty Monday afternoon on the hot sidewalk next to a “blue line flag.”

The black and white striped U.S. flag with a single blue line shows solidarity from “the thin blue line” of law officers with a fallen fellow officer, Schumacher said.

“We are each taking an hour, because there are so many who want to participate,” she said.

Weber, 37, drowned in the Missouri River about 3 p.m., Friday, July 3, after jumping in to rescue his 8-year-old son who fell out of the moving boat.

Another boat pulled his son to safety, but Weber went under in the strong current off Diver’s Point off the Oahe Downstream Recreation Area about a mile south of Oahe Dam north of Pierre.

Weber’s body was found and recovered Thursday afternoon, July 9, in the river near the railroad bridge between Pierre and Fort Pierre.

Schumacher is a pilot for the Highway Patrol and patrolled the river last week, looking for her friend and colleague.

“We flew every day, searching for his body until it was located,” she said. Schumacher was up in the air on Thursday and had landed shortly before Weber’s body was found by a volunteer searcher in a boat.

“Lee was a great guy,” Schumacher said, having to bite her lower lip as it trembled. “I would usually talk to Lee about fishing. We were both pretty passionate about that and we’d talk about where to find the good spots.”

Another Patrol trooper was to relieve Schumacher on Monday afternoon.

Hughes County Sheriff Darin Johnson said members of his office in Pierre will take part in the casket watch. So will members of the South Dakota National Guard, where Weber served since late 2001, only months after graduating from Riggs High School in Pierre.

Weber had worked for the sheriff’s office in Pierre since 2015. Staff Sgt. Lee Weber was approaching his 19th year the South Dakota Army National Guard. He enlisted in the Guard in December 2001, seven months after graduating from Riggs High School in Pierre.

He was in the Army Guard’s 153rd Engineer Battalion, with which he served tours of duty in Iraq and Afghanistan.

In November 2009, attached to the state Guard’s 211th Engineer Company, Weber drove a massive Buffalo MRAP, a mine resistant armor-protected vehicle used for dangerous “route-clearing.” He was part of a long convoy that went miles along an Afghan road in enemy territory. Other vehicles in the convoy took hits from enemy explosives.

No one was injured and the convoy spent the night sleeping on the road. The next day, more travel and an attack by enemies firing rifles. Again, the convoy’s response stopped the attacks and no Guard soldiers were hurt.

“I’m just hoping we can get back without any problems today,” Weber told his comrades that day, according to a report by a Guard public affairs sergeant who rode along and filed a story.

They did. At the end of that long second day in 2009, they returned to base, no one hurt, except for a couple vehicles damaged.

It was that kind of duty, that kind of service, that Weber’s colleagues point to for making him someone so many looked up to and counted as a friend and comrade.

So his obituary written by his loved ones and released Monday began this way: “Lee Weber, 37, of Pierre, SD, died a hero to his family on July 3, 2020, in the Missouri River near Pierre, saving his son’s life.”

His funeral will be a public one, set for 10 a.m., Thursday, July 16, at the amphitheater in Steamboat Park in Pierre.

Seating won’t be provided for members of the public, who are encouraged to bring their own chairs. The service will be livestreamed online at www.isburgfuneralchapels.com. For the full obituary, see page A7 in today’s Capital Journal; or go online at www.capjournal.com.

His survivors include his wife, Wendy, and their six children: Latoya, Magnus, Amadeo, Lexinn, Emalee, and Samuel; his mother Linda Binstock and step-father Todd Binstock of Pierre; and his father Russell Weber of Dimock, South Dakota.

Visitation from 3:30 to 6:30 p.m., Wednesday, at Isburg Funeral Chapel, 439 S. Pierre St., will be handled in line with coronavirus concerns: masks will be required, while there will be limits on the number of people in the chapel, according to the family.

Donations to the Lee Weber Memorial Account can be made at any BankWest location in the state.