Medical marijuana dispensaries have opened across the state of Oklahoma, including at this storefront location in Oklahoma City. 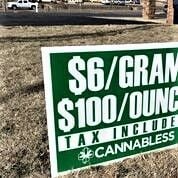 Medical marijuana in Oklahoma is relatively affordable, even with a sales and excise tax added to each purchase.

As South Dakota moves forward on creating a regulatory system for medical marijuana by the end of 2021, some people have looked to Oklahoma for guidance on how — or how not to — develop a functioning framework.

Oklahoma voters approved the legal sale, possession and use of medical marijuana in June 2018. The measure required rapid implementation of a regulatory framework, providing only about 10 weeks to prepare for legal sales compared with an average of more than a year in most states.

Since then, the state has taken a free-market approach to certification of marijuana-related businesses and has one of the least restrictive physician-certification processes for patients who want to obtain medical pot.

At a press conference in mid-March, South Dakota Gov. Kristi Noem said Oklahoma was the only state to put a medical marijuana program in place faster than required by South Dakota Initiated Measure 26, which takes effect July 1 and has deadlines for creation of a regulatory framework by the Department of Health by Oct. 29, and issuance of medical marijuana cards to patients by Nov. 18.

Noem, who opposes legal marijuana in any form, said the resulting program in Oklahoma is “a mess.” She pushed for a one-year delay in implementation of the South Dakota medical program but was rebuffed by the state Legislature.

Noem spokesman Ian Fury responded to an email from South Dakota News Watch seeking clarification of the governor’s views by providing only a link to a June 2020 news report by Oklahoma Watch, a nonprofit news organization. That article begins, “Welcome to the Wild West of weed,” and goes on to examine how fast Oklahoma started and has since expanded its medical marijuana program. Asked for further specifics of Noem’s concerns about Oklahoma’s program, Fury did not respond.

Some experts in Oklahoma say the program there has been a great success because it has embraced the wishes of voters by making medical marijuana widely available to those who need it and obtain a physician’s approval to get it.

“The main goal was to legalize access for medical marijuana patients and provide them an abundant source of medicine, and 1,000 percent that has been a success,” said Chip Paul, a business owner who played a lead role in writing the state’s regulatory framework for medical marijuana.

Most states that have approved medical marijuana, including South Dakota, North Dakota, Minnesota and Montana, have a list of medical conditions that a patient must be diagnosed with before becoming certified to obtain medical marijuana. In Oklahoma, patients must only get a doctor’s certification that the marijuana will help them in some way. Oklahoma has also seen the rise of a cottage industry of physicians who make themselves readily available to approve medical marijuana cards for patients, including through virtual visits that can be arranged online.

As of March 5, Oklahoma had more than 381,000 patients or caregivers who are legally able to obtain and use medical marijuana, making up about 9.5% of the state’s overall population of 4 million people. The state had about 2,150 medical marijuana dispensaries on that date.

South Dakota state Rep. Mike Derby, a leader of the legislative Cannabis Caucus, said he appreciates that Oklahoma has provided a level of “social equity” to its program by creating business opportunities for entrepreneurs and small-business owners across the state.

“The sales and licensing and distribution are not controlled by just a few big companies; instead they provide entrepreneurs a chance to participate in this industry,” said Derby, R-Rapid City. However, Derby added that South Dakota should not use too much of Oklahoma’s medical marijuana program as a model for its own.

Terri Watkins, spokeswoman for the Oklahoma Medical Marijuana Authority within the state Department of Health, said the state was forced to rush to implement its medical marijuana program but has done its best to accommodate the needs of medical patients and businesses and individuals in the industry.

“I would certainly not say we’re a mess,” Watkins said. “We had some challenges implementing a program in about two months, and that made it difficult, but now there are a lot of things coming into play two and half years later that we’re looking to improve on.”

Dr. Jean Hausheer, an ophthalmologist in Lawton, Okla., was president of the Oklahoma Medical Association when medical marijuana passed. Hausheer called the Oklahoma program a “free-for-all” that has made it too easy for patients to get medical marijuana. Hausheer, who helped form a statewide group called “Keep the Medical in Medical Marijuana,” says she is troubled by how quickly and widely medical marijuana has been made available in the state, including across rural Oklahoma.

“Your worst fear is that it’s going to show up in every inch of your state, and it has really, it has overtaken things,” she said.