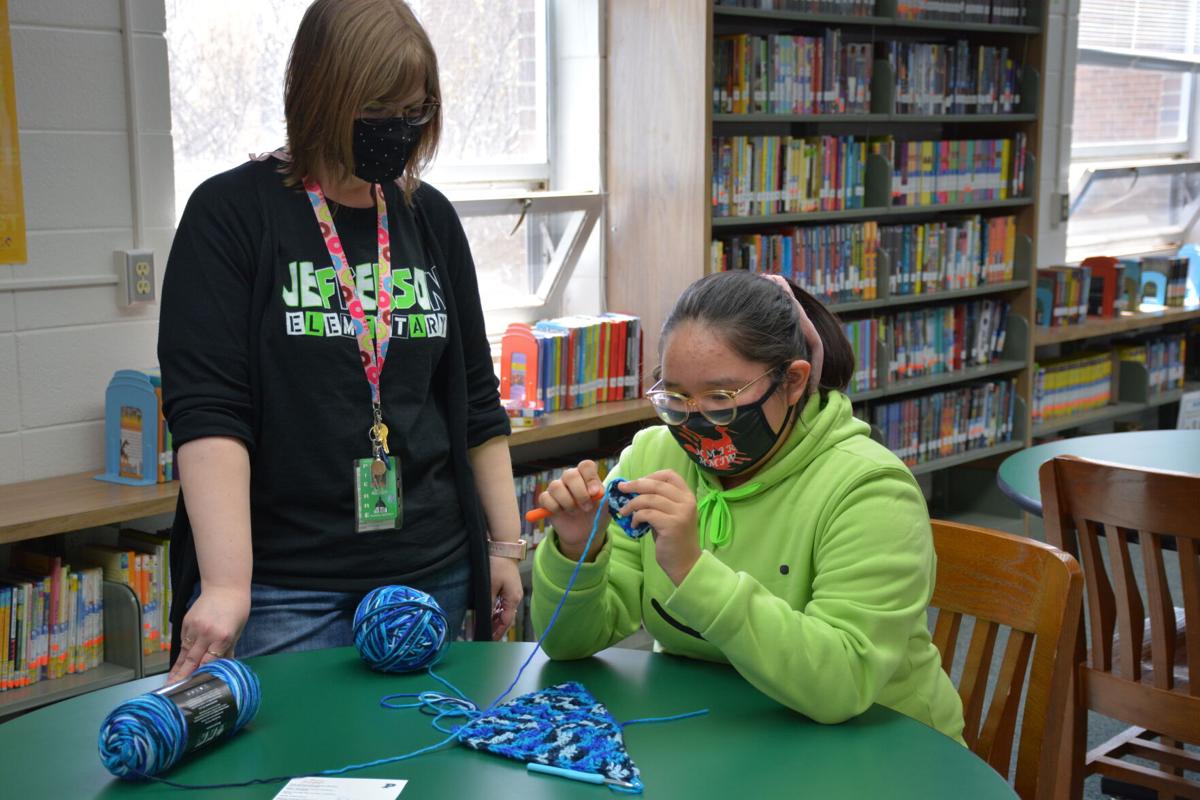 Jackie Richey looks on as Rhawni Traversie shows her some crochet techniques. 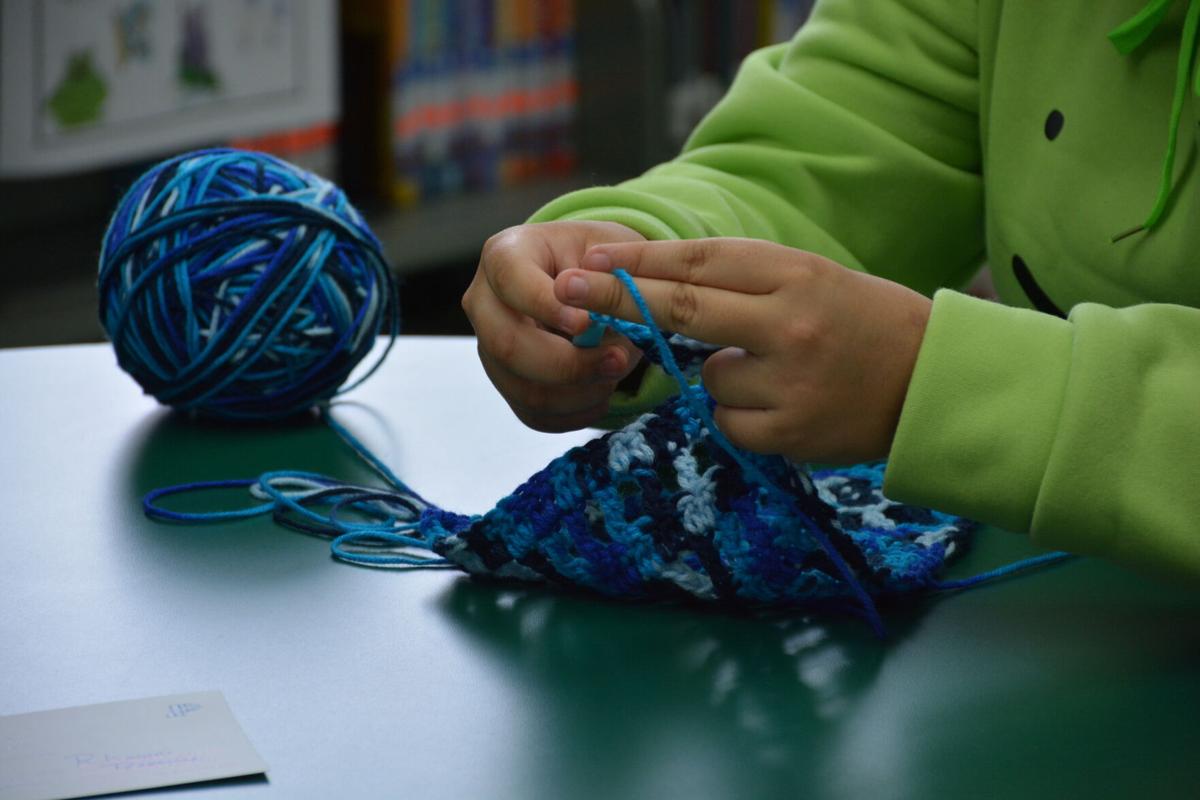 Rhawni Traversie makes some more progress on a crochet project she is working on with her mentor Jackie Richey.

Jackie Richey looks on as Rhawni Traversie shows her some crochet techniques.

Rhawni Traversie makes some more progress on a crochet project she is working on with her mentor Jackie Richey.

The Teammates of Pierre are getting off to a good start after a delayed launch due to the Coronavirus pandemic, but the program could still use more mentors as organizers look to expand.

The Teammates Mentoring is a Midwest program that got its start from University of Nebraska football coach Tom Osborne and his wife Nancy in 1991. The program began last year in Pierre, but it hit a hiccup when COVID-19 caused a shutdown in March 2020.

But that didn’t thwart organizers at Georgia Morse Middle School in Pierre from keeping the project alive, which got rolling in February.

Teacher-Librarian Renae Lehman is the local coordinator and said the objective is to expand the program to other schools throughout Pierre and include students in third through 12th grades.

“It took us about a year to get everything ready, and then we were going to try and launch last spring, and then everything shut down on March 13th. So, we kind of had to wait,” Lehman said. “This fall, we were working on trying to get everything lined up to be able to get launched early in 2021. So it was not exactly how we wanted to get going. We would have rather got going last spring and had the whole first-year mentoring this year, but it just got a little delayed with our COVID epidemic.”

But not just any pairing will do. Lehman said the program takes great care to match an adult with the right student based on shared interests, hobbies and values. The Teammates’ goal is ensuring the pairing between student and mentor lasts through the student’s high school career.

The program doesn’t target any single group of kids for mentorship. Lehman said the program is open to all students, and all of them — regardless of background — could benefit from having a positive adult influence in their life.

Lehman said security in who is accepted as a volunteer is also a significant aspect of the program.

People who volunteer for the program must apply through the teammates.org website, where mentors go through a vetting process before approval.

“Once they get through screening, which includes sending out a background check — whoever filled out the application, they’ll get a link in their email for a background check at no cost — that’s the reason we pay a membership fee to belong in the organization,” Lehman said. “Their primary concern is to make sure there’s plenty of safety and security.”

She said that’s the idea behind the mentor program maintaining an in-school only function.

Mentors and their student partners spend 45-60 minutes together per week on school grounds, where they engage in activities they both enjoy and talk about whatever comes up.

The students can spend time together on the ground doing various things like playing video games, doing activities or just talking. Lehman said the goal isn’t to make the time feel like a tutoring session where students do extra work.

Wednesday’s crocheting get-together is the fifth time the two spent time together since Pierre’s program launched — it will also be the last meeting for this school year. Traversie said she’ll be looking forward to next school year when she gets to spend time with Richey again. Having the company is what made Traversie interested in participating in the program.

“The fact that you can actually have somebody to talk to and you can learn new things from them,” she said. “And that’s basically what made it intriguing. Plus, you can meet someone who is basically your friend.”

Richey said she heard about the program and joined in because, as a teacher, she understood how meaningful these relationships are for children.

“Everybody needs someone in their life that can be there for them, and they feel comfortable talking to about anything and learning new things,” she said. “We’ve been able to help each other learn some different things and just being there to talk to each other.”

During their visit last week, the two ended up spending a good portion of their time talking after a fire alarm sent them outdoors. But the two laughed and said it was still quality time spent together.

Lehman said it took some deep reflection and prayer when she agreed to take on the program’s coordinator role after doing her research. She said it wasn’t just the initial launch but also sticking around to ensure the program expanded to the other schools in Pierre and different grades. It also meant making time to keep trackt of all the mentors and students who set up their meeting times.

But it’s not just organizers expending time. While Lehman said the program is flexible to work around the mentor’s schedule, there is still a long-term expectation for the adult to stick with Teammates and the individual student.

Richey said there’s talk about a honeymoon period where it starts well but may grow into more work as time goes by.

“But, hopefully, it doesn’t because we enjoy doing this so far,” she said. “But it is a commitment because they said they want it to be through high school. Through the rest of her high school and, if we want, further into if you were to go into college. I hope I could still be a positive person in your life that you would invite me to your graduation, and I want to be there for you throughout your lifetime.”

But the commitments aren’t lost on Traversie, who said she is looking forward to next year and more activities before showing Richey some crochet moves of her own.

“I’m just really glad to have a mentor because it’s fun, kind of like my best friend,” she said.