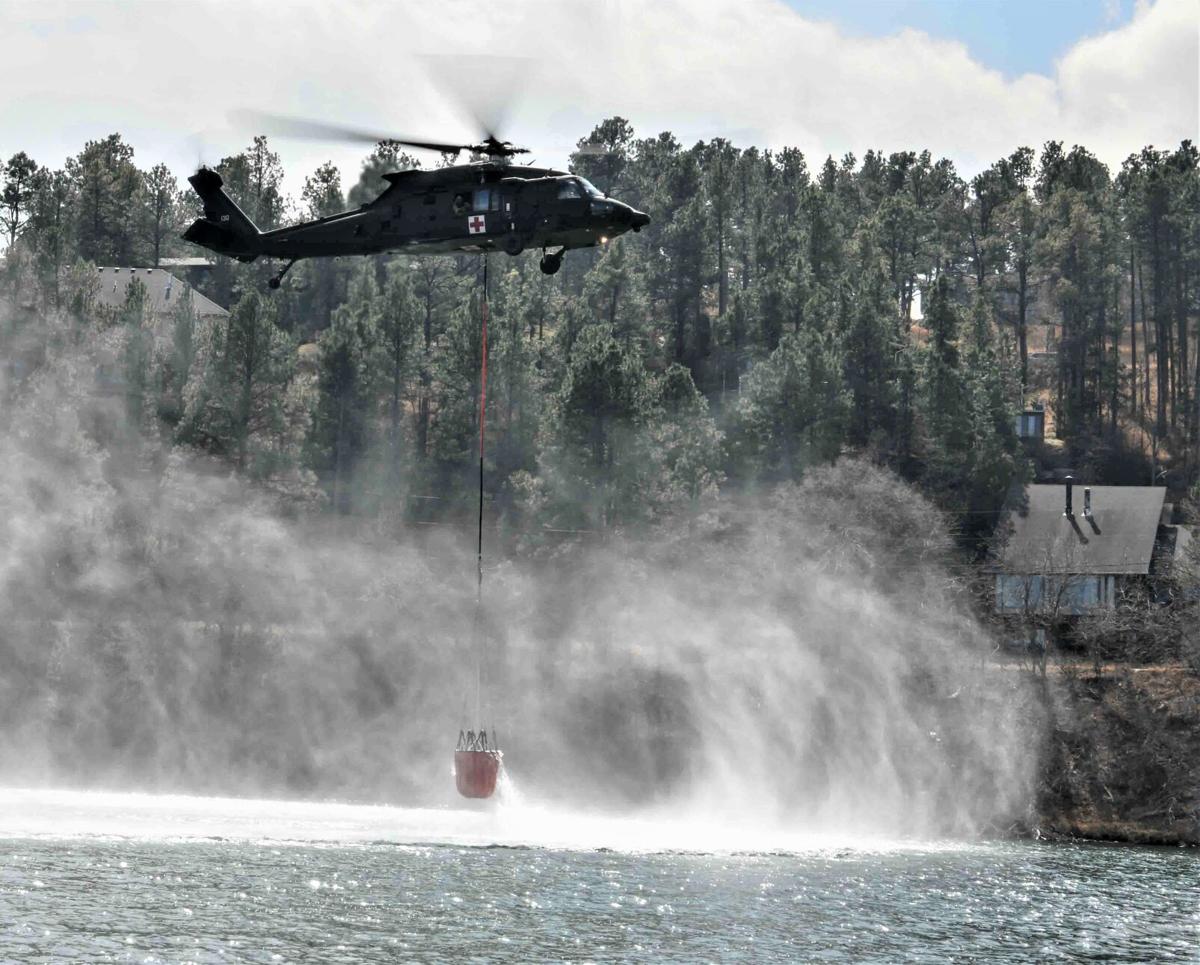 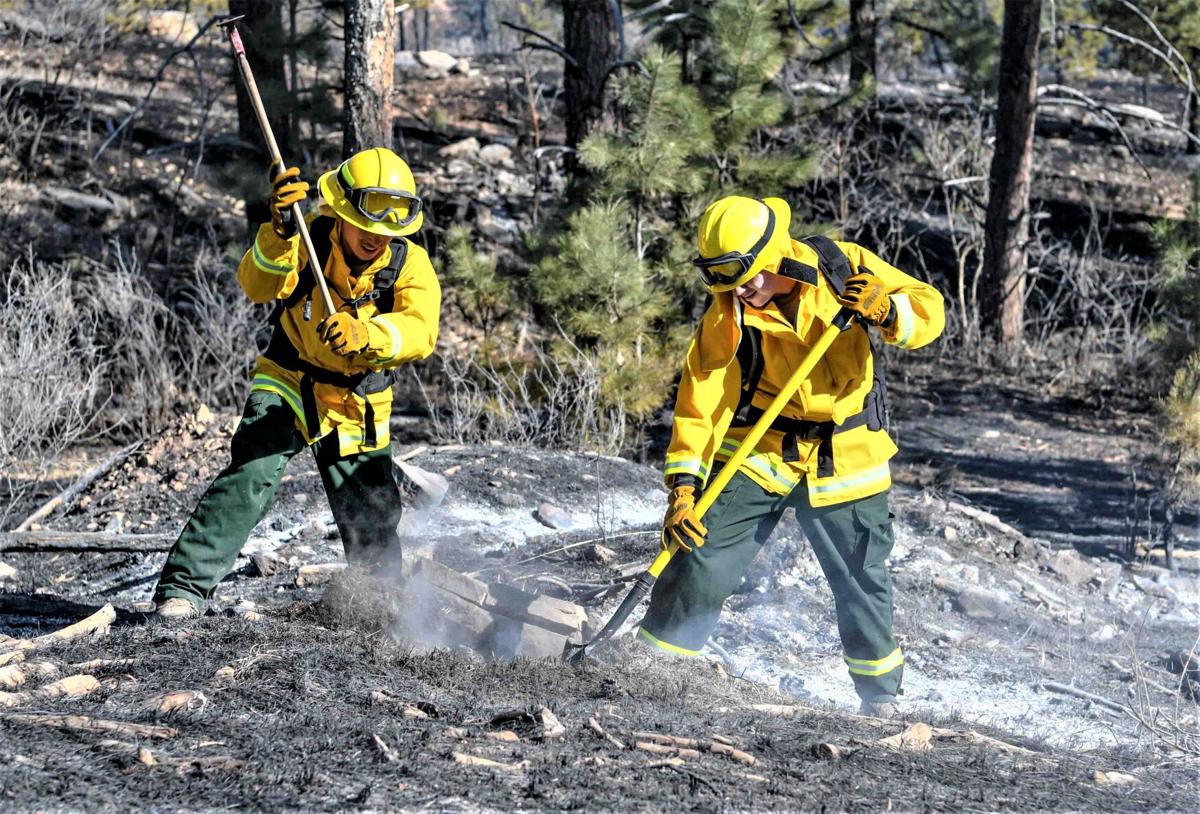 Firefighters from the S.D. National Guard respond to Schroeder’s Fire in Rapid City, March 30. With the fire quickly spreading, additional SDNG resources were being called in to help support local, state and federal agencies.

Firefighters from the S.D. National Guard respond to Schroeder’s Fire in Rapid City, March 30. With the fire quickly spreading, additional SDNG resources were being called in to help support local, state and federal agencies.

The SDNG responded with HH-60 Black Hawk helicopters, a firefighting ground crew, and other support personnel to help battle the fire, which burned 2,224 acres and was finally 100 percent contained on April 5.

The fire started in the morning four miles west of Rapid City off Schroeder Road and near Nemo Road. Fueled by extremely dry conditions and high winds, the fire moved quickly to the western edge of Rapid City, forcing the evacuation of residents in a number of neighborhoods.

The governor activated the National Guard. The SDNG’s Joint Operations Center began calling in personnel for state active duty and coordinating equipment from a number of Rapid City and Black Hills area units.

“In a short amount of time, we had people and resources available to the incident commander,” said Lt. Col. Dale Gadbois, SDNG director of military support to civil authorities.

“Our mission was to support ground crews who were creating hand and dozer lines, as well as knocking down smoldering areas that could create more problems and affect neighboring houses,” Sgt. Trent Eddy, a crew chief with Co. C, 1-189th, said. “We made many bucket drops in hopes to slow the rapidly increasing fire. Many of the drops were within 100 yards of homes and some as close as 20 feet.”

“We had soldiers coming in...with no hesitation. They just told their boss ‘I’m leaving now, I have to go’,” Staff Sgt. Jason Besmer, readiness NCO, 216th/451st, said. “It was the employers being supportive of that.”

The SDNG also began prepositioning heavy engineering equipment and bull dozer operators from the 842nd Engineer Company. A number of other support personnel also were called in to help provide logistics coordination, administrative support, and security at road checkpoints near West Camp Rapid, which was also sustaining fire damage.

For the next several days, the SDNG crews worked from the air and ground to help support about 250 other civilian firefighters and support personnel.

“We basically improved the firing line – we went through and did a lot of mop up type of operations,” Besmer said. “We wet down a lot of stuff that was still on fire and decreased the chances of that fire jumping the road and taking out structures. We also did some water tender operations where we filled other trucks that were working within the same division.”

From the air, the aviation crews flew over 21 hours, made 130 water drops, and dropped more than 48,000 gallons of water to assist firefighters on the ground.

“A lot of crew coordination within the aircraft goes into fire support. From initially deploying our bucket, to coming in and out of the dip site, and most importantly getting a good drop line to be as effective as possible for the crews on the ground,” Eddy said.

While the firefighters on the ground were often unseen, the helicopters flying in the air became a common fixture over Rapid City, as crews drew water from nearby water sources like Canyon Lake.

“It felt great to be part of the effort of saving people’s homes. Being in a small community such as Rapid City, we all probably knew someone that was being evacuated,” Eddy said. “I grew up on the west side of town and personally knew multiple families that were affected.

In addition to fighting the fire, the SDNG also provided additional support to the incident command team coordinating the fire response. After a few days, the ICP was relocated to Camp Rapid, which provided a building and space for daily operations, lodging for personnel, and staging for equipment and supplies.

“Many people have expressed their gratitude for what all the firefighters and supporting personnel did to save our community. It is tragic moments like this that truly make people come together. Being a member of the National Guard and having the ability to help people of this great community makes it all worth it,” Eddy said.

“Being able to see first-hand the fire lines burning right up to the edge of houses and be stopped, and knowing that we played a part in that, really reinforces the decision to be a part of the National Guard,” Knutson said.