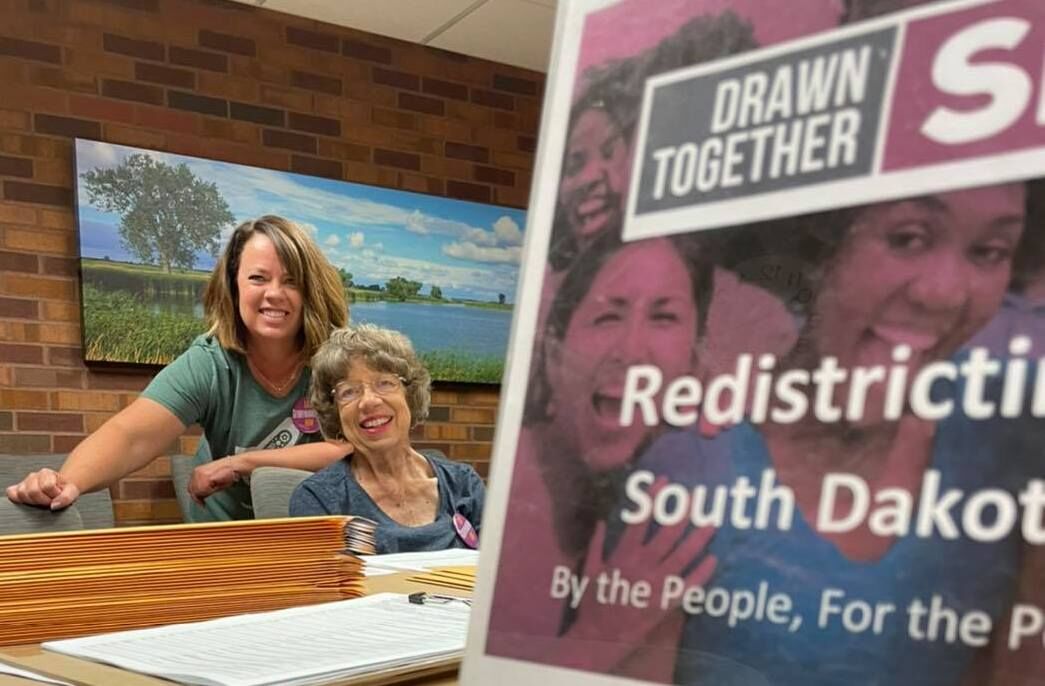 Amy Scott-Stoltz and her mother, Harriet Scott, are leading a petition effort through Drawn Together South Dakota to form an independent commission to redraw future legislative district lines and make gerrymandering illegal in the state. 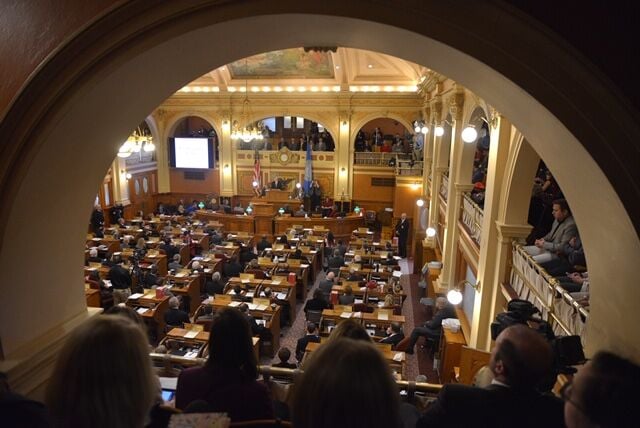 Native Americans make up 11 percent of the population of South Dakota but only 4 percent of the state Legislature, according to census and legislative data.

Amy Scott-Stoltz and her mother, Harriet Scott, are leading a petition effort through Drawn Together South Dakota to form an independent commission to redraw future legislative district lines and make gerrymandering illegal in the state.

Native Americans make up 11 percent of the population of South Dakota but only 4 percent of the state Legislature, according to census and legislative data.

Native American voting-rights advocates are concerned the voices of South Dakota’s largest minority group may be excluded from the ongoing legislative redistricting process and that opportunities for Natives to represent their communities or have influence in state elections could be restricted as a result.

Native American leaders and government advocates are concerned a shortened timeline for redistricting this year and historical logistical challenges in Indian Country may make it harder for Natives to participate in the public input process and ultimately to get elected to state office.

Redistricting, or the redrawing of legislative district boundaries, is a critical component of determining fair and equal representation of population groups within the state Legislature. The process takes place every 10 years and uses new U.S. Census population data to determine how many people each state representative or senator should represent.

Some critics say lawmakers have too much control over the process that can be manipulated — or gerrymandered — to make it easier or harder for members of particular population groups or political parties to get elected or remain in power.

Native Americans are under-represented in the South Dakota Legislature and have been for years.

South Dakota has a history of manipulating Native American populations during redistricting in two ways to reduce Native electoral influence, according to Four Directions, a group that educates and advocates for Native American voting rights and voter empowerment.

Redistricting leaders have either packed Native populations into a single district to reduce their voting influence in multiple legislative districts or diluted their populations across districts to make it harder for Natives to get elected or to have influence over who gets elected, the group said.

For example, in the 2001 redistricting cycle, a federal district court ruled that the South Dakota Legislature violated the Voting Rights Act by packing District 27 with 90 percent of Native American voters, which diluted the potential influence of Native voters in neighboring District 26.

The court ruled that South Dakota legislators drew a map that lumped Native American voters living in the counties where the Pine Ridge and Rosebud Indian reservations are located into a single district, District 27. If the state had drawn districts “more fairly,” according to the ACLU, Native Americans would have been a majority in two districts instead of a supermajority in only one.

This year, the redistricting process is about five months shorter than in previous years because of a months-long delay of detailed data from the U.S. Census needed to draft the districts into similar population sizes.

“We are fighting very diligently to make sure we don’t repeat history and that indigenous people and tribal communities are part of this democratic process,” Candi Brings Plenty, Indigenous Justice Organizer for the American Civil Liberties Union of South Dakota, said.

The condensed schedule for drawing the lines is concerning for Native Americans, who are considered a protected class under the Voting Rights Act, which says states cannot enact a voting standard practice or procedure or draw lines that would make it more difficult for someone to vote because of their race or color.

Holding input hearings on reservations is essential to ensuring people living there have a say in their districts, O.J. Semans, co-founder of Four Directions, said. Many on the reservations don’t have reliable internet access or transportation, making it difficult to travel longer distances to a hearing or remain updated on the process.

“Our concern is that the Legislature would change the boundaries that would lessen or dilute the Native vote for candidates of their choice,” Semans said.

At its most recent meeting on Aug. 30, the Senate and House Legislative Redistricting Committee created a subcommittee focused on reservation areas, which was welcome news for Native American advocates who for years said legislators need to travel to reservations to allow residents to provide input.

“Indigenous communities are very much involved, but if they’re having obstacles getting to the polls, how are they supposed to get access to these urban areas for hearings?” Brings Plenty said.

State Sen. Jim Bolin, R-Canton, said that during the redistricting process in 2011, he personally visited a few reservations, as did other members of the committee. He is on the subcommittee this year aimed at visiting those communities. Legislators said at the Aug. 30 redistricting committee meeting that the subcommittees for reservations, Rapid City and Sioux Falls would draft hearing schedules and get that information to the public soon.

Legislators this year are tasked with creating a map that balances rural and minority group voting districts with those of the two growing urban areas in the state, and they have less time to draft a map to present to the public because of a delay in detailed census data needed to draw those lines.

Normally, that information is released in the spring. This year, however, due to delays caused by the COVID-19 pandemic, the state didn’t receive the information until Aug. 12. The Legislature has until Dec. 1 to submit official maps — otherwise, the state Supreme Court will draw the lines.

The main friction areas this year are likely to be how districts are balanced in rural and urban areas, and how lines are drawn in and around Native American reservations and other urban Indian areas in the state, David Wiltse, associate professor of political science at South Dakota State University, said.

“The important shift, if it takes place, would be between areas that are losing population, their districts are going to get larger geographically,” Wiltse said. “The urban areas — Pennington, Minnehaha, Lincoln counties — they’re going to see disproportionately more representation, just because that’s where people are moving to. By default, it’s going to push political power to the areas that are growing and take it from the areas that are shrinking.”

One big challenge will be creating “conurbation” districts — those in an extended urban area that includes multiple towns — for the Rapid City and Sioux Falls areas, which account for a majority of the state’s growth. Redistricting leaders say at least one district will probably be added to the Sioux Falls area, leaving fewer districts available for rural counties.

“Rural communities are in a tough spot. All deserve proper representation,” Amy Scott-Stoltz, president of the South Dakota chapter of League of Women Voters, a non-partisan group that works to increase public understanding of major public policy issues, said

In a state that has traditionally had strong rural representation, the likelihood of adding at least one more district in the Sioux Falls area, which has grown 25 percent since the 2010 census, is of concern to those living in counties seeing population declines.

“It increases the distance between a representative and their constituents,” Wiltse said. “That representative now has to learn about more communities across a greater area than they would have in the previous election. It just makes those peoples’ jobs a little harder to represent a bigger geographic area, even though it’s the same number of people.”

Bolin said keeping county populations in the same district is a priority, but noted that some will have to be split or combined. Lawrence County is likely to be the only county able to stand on its own, Bolin said. Currently, about 10 counties are part of more than one district.

What normally is done in about seven months — seeking public input and providing draft maps — will have to be done in about two months, Bolin, vice-chair of the redistricting committee, said.

At its most recent meeting, the House and Senate Legislative Redistricting Committee contemplated a dozen options for how to break up the Rapid City and Sioux Falls areas. Subcommittees for both areas were created, and the group voted to decide at its Sept. 9 meeting how many districts each area would get.

Four Directions is using public software to draft a few possible maps to present to the committee, Semans said. Legislators and advocates encouraged members of the public to do the same.

Legislators voted at the Aug 30 meeting to withhold the software they are using from public inspection, however, and only allow the 15 members of the committee to use it. Free services available to the public include Dave’s Redistricting Map or Districtr.

Chair of the senate committee, Sen. Mary Duvall, R-Pierre, said she would welcome any map drawn by a member of the public.

“If there is someone out there who has come up with the perfect map, email it to me,” she said.

“People know gerrymandering is happening. People don’t want elections that are flawed. Both parties have gerrymandered. That’s why we want an independent commission,” Scott-Stoltz said. “What’s at stake is the next 10 years of representation here.”

Bolin said the process of drawing district lines should stay within the Legislature, but acknowledged that both Democrats and Republicans participate in gerrymandering. The current map, he said, has not been involved in a lawsuit for violating the Voting Rights Act as previous maps have.

Population and power shifts are happening, but the likelihood of the Democratic Party gaining much ground is unlikely, given how evenly spread out the registered Republicans are and the longtime GOP-dominated voting patterns in the state, Wiltse said.