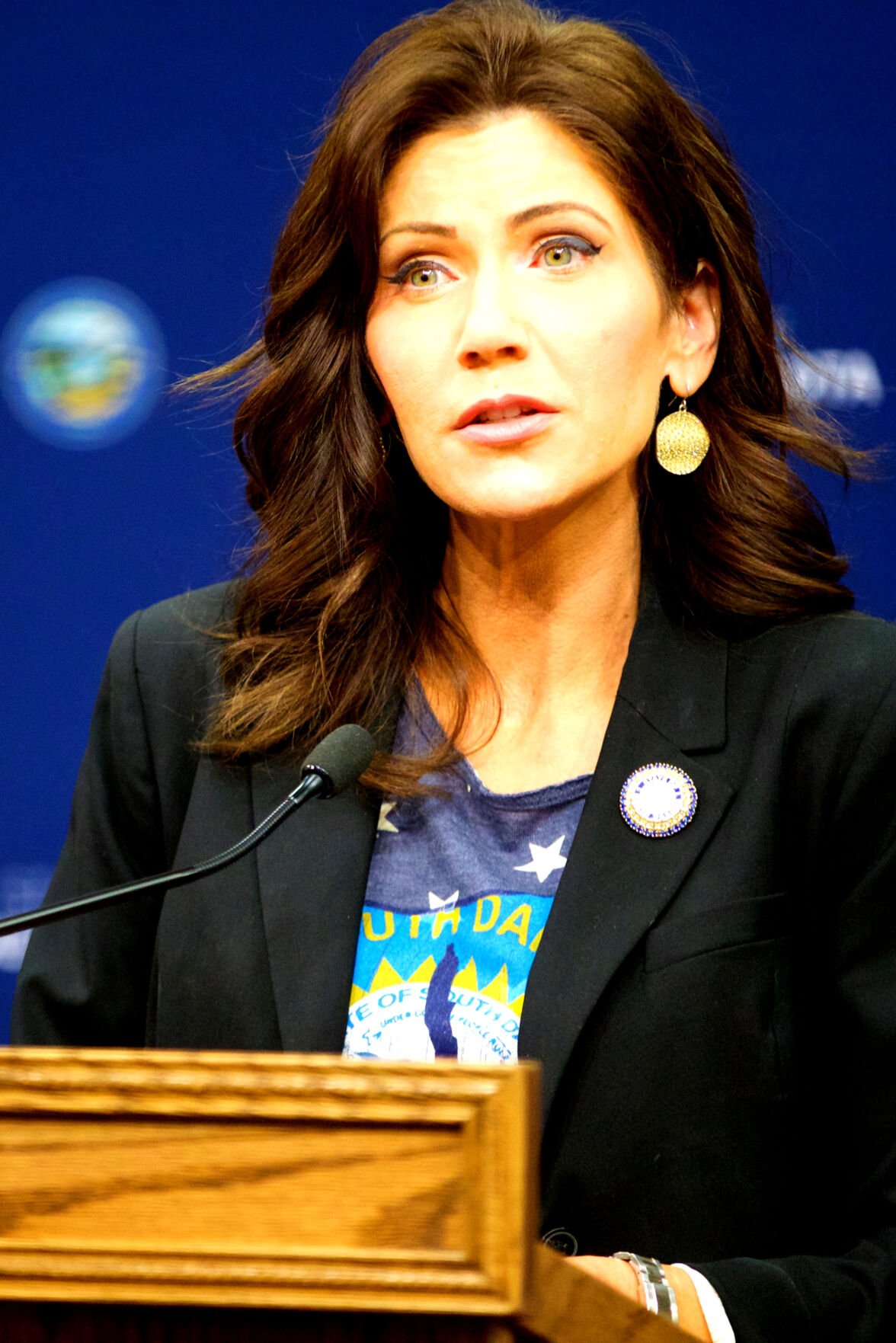 Gov. Kristi Noem speaks during a news conference about COVID-19 from the State Capitol earlier this year. On Wednesday, Noem said it is unrealistic to expect children to wear masks to combat COVID-19 while in school. 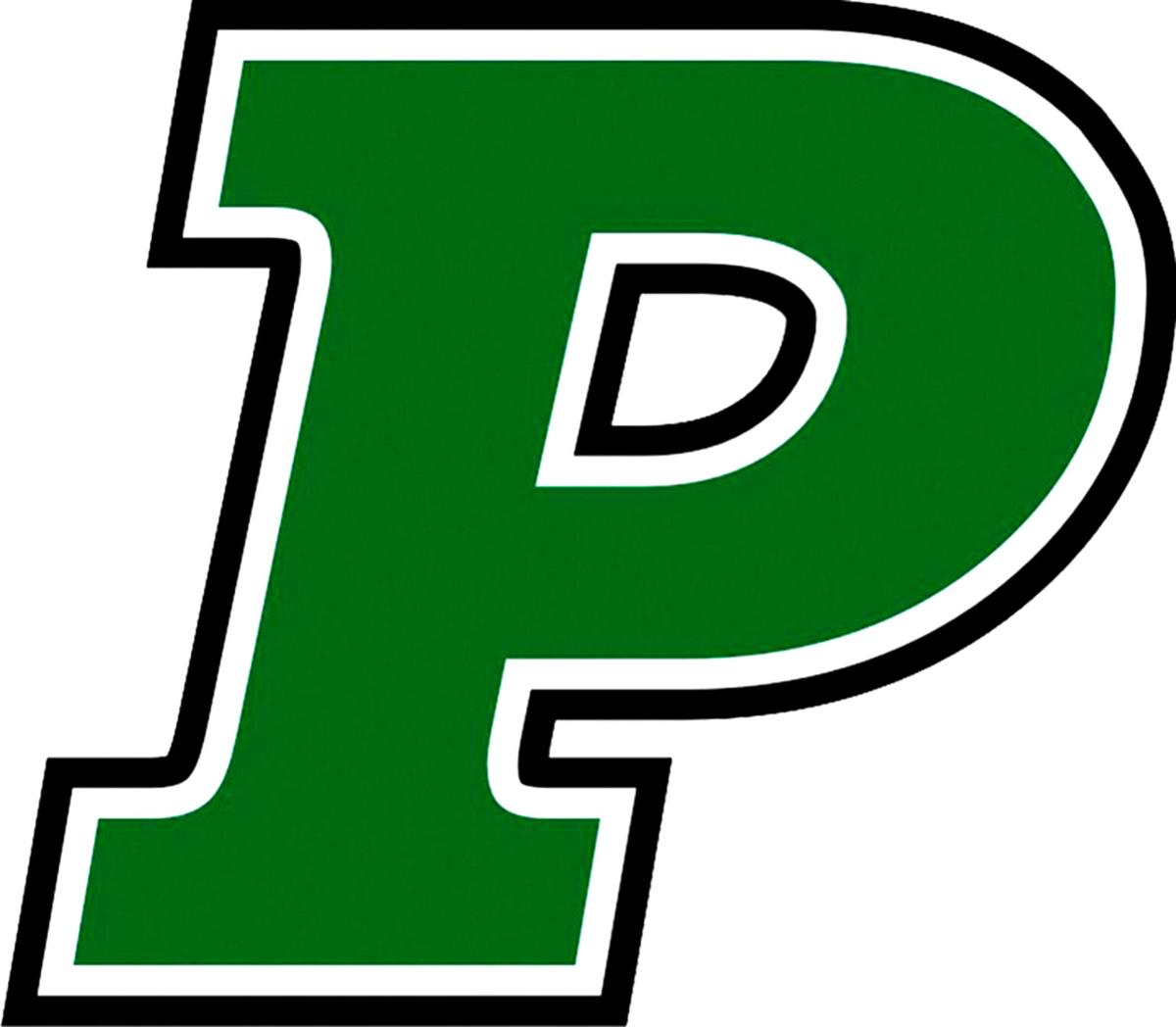 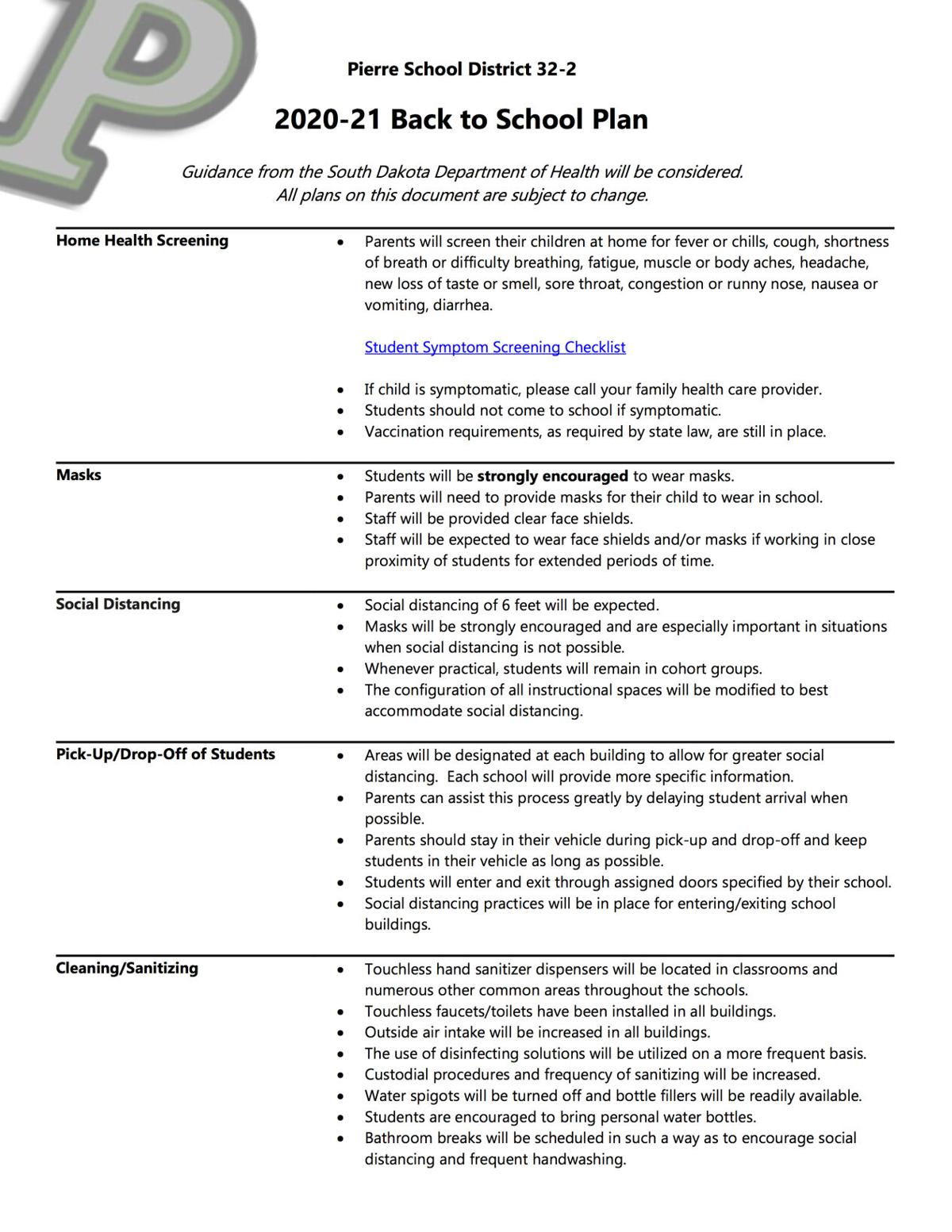 Part one of the Pierre School District back-to-school plan. 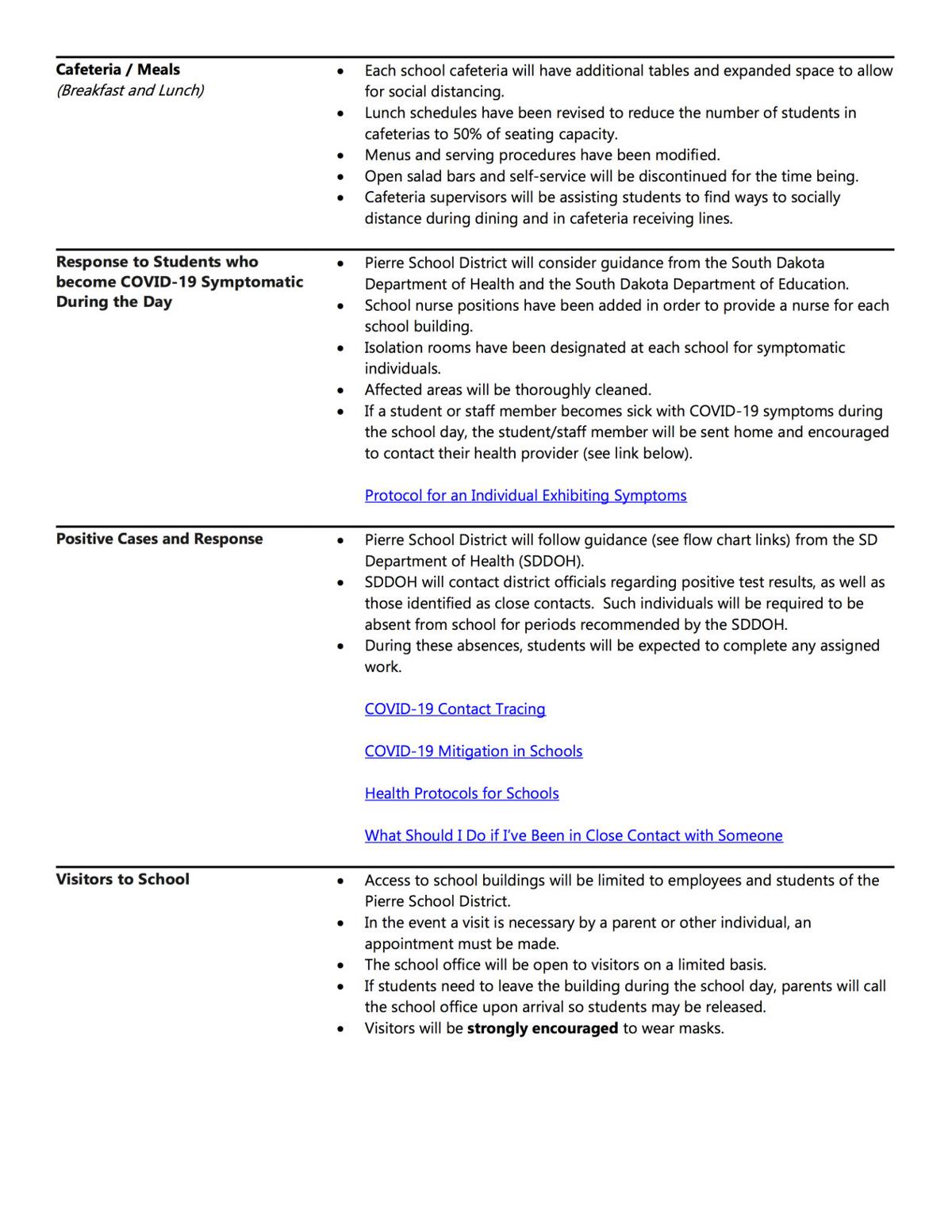 Pierre Governors gymnast Mikah Moser does the splits in the air above the balance beam during a competition, Jan. 9 in Pierre. Students throughout the district are set to return to the classroom Aug. 20.

Photo by Joseph Barkoff
1 of 5

Gov. Kristi Noem speaks during a news conference about COVID-19 from the State Capitol earlier this year. On Wednesday, Noem said it is unrealistic to expect children to wear masks to combat COVID-19 while in school.

Part one of the Pierre School District back-to-school plan.

“It certainly would be challenging for a child to keep a mask on for seven, eight hours a day. Even while I’ve sat with a child that had one on, five or 10 minutes is ... very difficult for them. And they are constantly touching it, taking it off, dropping it on the floor. Those all increase rates of infection.”

South Dakota educators or parents looking for someone to encourage children to wear masks to curtail the spread of COVID-19 when students head back to school next month probably did not detect that message from Gov. Kristi Noem during her Wednesday interview on Fox News.

Optional masks are only one question for parents, students and educators in the Pierre School District when classes begin Aug. 20. After all: Is it even realistic for teachers of students in, say, first grade to keep the often exuberant youngsters 6 feet apart at all times?

“I don’t think that is going to be easy,” new South Dakota Education Association President Loren Paul told the Capital Journal on Tuesday. “That is why we believe you should wear a mask. There is no study showing that wearing a mask is detrimental to the health of an otherwise healthy person.”

Paul assumed his post on July 15, taking over for former union President Mary McCorkle. The union states on its website that it represents more than 5,000 educators throughout South Dakota.

“Social distancing of 6 feet will be expected,” Glodt’s plan adds.

Paul remains skeptical, wondering, “How do you police that?”

“And middle school and high school will be as challenging. You’ve got kids giving each other high-fives in the hallway,” Paul said.

Paul does not dispute the fact that children benefit from being in the classroom to receive in-person instruction, as opposed to relying on internet connections for in-home education. He said delaying the start of school in Pierre from the scheduled date of Aug. 20 would not help the situation.

“I don’t necessarily think it is too early,” Paul told the Capital Journal. “Our teachers across the state want the students back in the classroom. Teachers want to be there for the kids.”

Paul said another problem is that, due to South Dakota’s conservative political tendencies, some students’ parents probably have an unfavorable view of masks. This may mean far more students take the option to NOT wear masks than do decide to wear them, particularly in the late summer heat.

“It would certainly help if a parent speaks of masks in a positive manner,” Paul said.

Though masks will be optional for students in Pierre, Glodt’s plan states: “Staff will be expected to wear face shields and/or masks if working in close proximity of students for extended periods of time.” The plan adds that each school’s cafeteria will have expanded space to allow for social distancing, while lunch schedules have been revised to only run the cafeterias at 50% capacity.

Statewide ViewPaul said because there are no clear directives from either the federal or state government, there may be vast differences among the way South Dakota school districts approach issues associated with COVID-19.

“They are going to leave these major decisions up to local school boards,” Paul declared.

Noem confirmed South Dakota’s first five COVID-19 cases on March 10. In-person sessions for the 2019-20 academic term came to a halt for most of South Dakota and the nation shortly thereafter. The T.F. Riggs High School class of 2020 collected their diplomas during a drive-by graduation and hat-toss ceremony.

During a Tuesday news conference in Sioux Falls which was also streamed via social media, Noem said she believes a solid majority of South Dakotans want children back in school soon.

“Online learning got us through the initial crisis that we faced, but it is absolutely not a long-term solution,” she said.

Noem said some children rely heavily on going to school from not only an educational aspect, but also for nutrition — and in some cases, even their safety.

“Some of our schools haven’t even heard from these kids since March. That cannot continue,” she said.

“We’re still dealing with a virus that we’re still learning about. We know a lot more today than we did four and a half months ago,” Noem said. “Many times, people want black and white answers, and, this isn’t a situation where we can give them that.”

Moving ForwardThere is perhaps no better illustration of how different the situation in Pierre is when compared to much of the nation than to consider that at a time when millions of Americans are compelled to wear a mask over their faces just to go outside, students in Pierre will be returning to class without such a mandate.

While Paul worked to keep the political aspects of COVID-19 to a minimum, South Dakota Democratic Party Chairman Randy Seiler wasted no time questioning Noem’s leadership amid the pandemic.

“The current governor is asking local schools and districts to make it work,”staying consistent with her accountability-free lack of leadership. Requiring masks and social distancing should have been the minimum model required from both the governor’s and State Health Department’s office,” Seiler said. “We need true leadership, a new plan for education, and we need it now.”

Noem, however, continued to focus on the positives.

“The state of South Dakota is a bright spot right now. We have job opportunities,” she said, while noting the struggles of many more densely populated states that saw governors impose so-called shelter-in-place orders.

“They are going to leave these major decisions up to local school boards.”

“It certainly would be challenging for a child to keep a mask on for seven, eight hours a day. Even while I’ve sat with a child that had one on, five or 10 minutes is ... very difficult for them. And they are constantly touching it, taking it off, dropping it on the floor. Those all increase rates of infection.”

Gov. Kristi Noem, during a Wednesday interview on Fox News