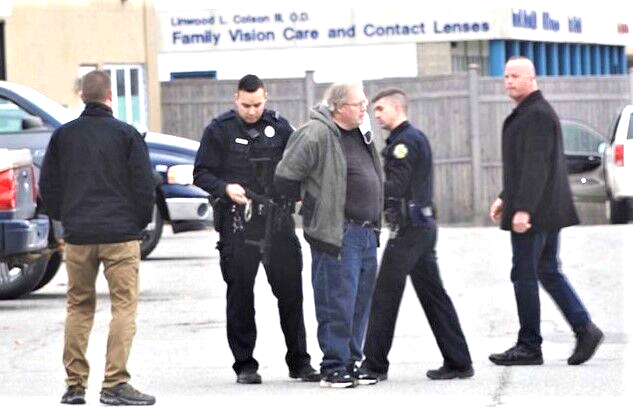 Bangor (Maine) police officers arrest Peter Beitzell, 58, on Wednesday morning, Oct. 28, after Gov. Kristi Noem's security detail of two South Dakota Highway Patrol troopers, seen here on the far left and far right, encountered the Bangor man who brandished a long knife and wooden baton at them. They told him to lose the weapons and called the Bangor police. No one was hurt.

Noem was on the Team Trump bus campaigning for the president in Maine and New Hampshire on Wednesday. 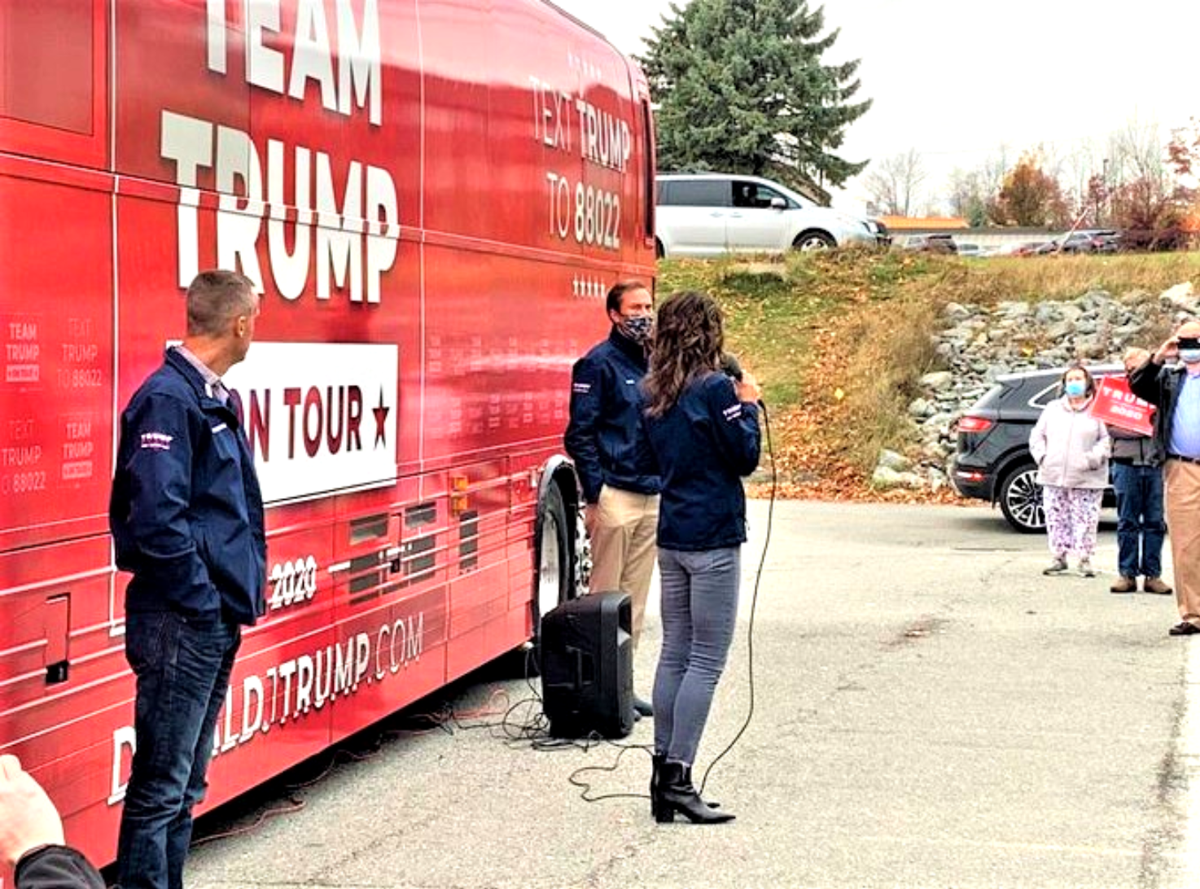 Gov. Kristi Noem spoke Wednesday morning, Oct. 28, in Bangor, Maine, campaigning for President Trump with senior Trump aide Corey Lewandowski, on the left. This was shortly after a Democratic man was arrested by Bangor police after South Dakota Highway Patrol troopers providing security for Noem said the man brandished a long knife and wooden baton at them. No one was hurt.

Bangor (Maine) police officers arrest Peter Beitzell, 58, on Wednesday morning, Oct. 28, after Gov. Kristi Noem's security detail of two South Dakota Highway Patrol troopers, seen here on the far left and far right, encountered the Bangor man who brandished a long knife and wooden baton at them. They told him to lose the weapons and called the Bangor police. No one was hurt.

Noem was on the Team Trump bus campaigning for the president in Maine and New Hampshire on Wednesday.

Gov. Kristi Noem spoke Wednesday morning, Oct. 28, in Bangor, Maine, campaigning for President Trump with senior Trump aide Corey Lewandowski, on the left. This was shortly after a Democratic man was arrested by Bangor police after South Dakota Highway Patrol troopers providing security for Noem said the man brandished a long knife and wooden baton at them. No one was hurt.

The incident this week in Bangor, Maine, during which a man was arrested with two weapons at a President Donald Trump campaign rally headlined by Gov. Kristi Noem, initiated a South Dakota conversation about Noem traveling to such events with a state-paid security team.

The armed man said he was a Democrat who disliked Trump and began badgering the Trump rally attendees. When two plain-clothes South Dakota Highway Patrol troopers approached the man and told him to lose the long knife and wooden baton he was brandishing, it led to Bangor police handcuffing the man. Police said he was cited with an expected felony charge and quickly released after paying $200 bail. He admitted to reporters in Bangor he had acted stupidly and said he only retrieved the weapons from his vehicle because the two troopers alarmed him because they did not show a badge.

Noem said later she wasn’t aware of the incident until it was about finished and that she was never in any danger. She also praised the work of her security detail, the troopers who have been with her on her many trips across the country campaigning for Trump.

The same two troopers were with her in the Pierre Regional Airport on Oct. 16 when she returned from campaigning for Trump in New Hampshire.

State Democratic lawmakers said Friday they hadn’t known that Noem was using state troopers as security on these campaigning trips and said they have questions about it.

U.S. Sen. Mike Rounds, R-S.D., up for reelection next week to a second six-year term, was South Dakota’s governor from 2003-2011. He is a Republican like Noem and most people in South Dakota.

So he knows something about security details for the state’s governor, including not even having one on his first out-of-state trip as governor with his wife.

“Jean and I were going that night to our first National Governors (Association) meeting. I had worked until about 5 (p.m.) that day and then we headed on down. We flew into (Washington), D.C., got there, I think, just after midnight and went into the hotel and up to the desk. I said ‘I’m here to get the keys to the room for Gov. Mike Rounds. And the desk clerk said, ‘Where’s your governor?’ I said, ’I’m the governor.’ And they said, ‘where is your security detail?’ I said ‘We’re not traveling with a security detail.’ And the front desk clerk said, ‘I can’t give you your keys.’ I said, ‘why can’t you give me my keys?’ He said, ‘My rules require us to give them to your security detail so they can go up to sweep the room first.’ Well, it had been a long night and Jean said, ‘Can’t I be his security detail?’

The clerk at the JW Marriott, just a couple of blocks from the White House, told her no and called his supervisor, who said the same: ‘We can’t give you the keys; only your security detail can get them,’” Rounds said.

Rounds said finally the hotel supervisor said the hotel’s security people would escort them up to their room and make sure the room was safe.

“So, they walked us up there and then handed us the keys.”

The next morning, Rounds said he was somewhat surprised at the conference to see that about every other governor had a security team.

After that Rounds began traveling with two Highway Patrol troopers as a security detail when he left the state.

“They would leave a day or two in advance of us and would touch base with everyone, with the Secret Service, and would meet us. And that works very smoothly.”

Rounds said he found that with a security team, they made doors open and wheels turn much easier, including being tied into the federal communications pathways. “So after that, we just started doing it,” he told the Capital Journal on Friday.

The tradition of the Highway Patrol serving as security for the governor goes back decades, but it hasn’t included out of state travel until more recently.

“But after 9/11, it’s become a pretty serious issue,” Rounds said. “It’s just an expectation that you would have a security detail when you travel out-of-state. Some states, they wont even let the governor drive a vehicle. But here in South Dakota, that’s not going to fly.”

Rounds, a pilot himself who often flies around the state, found his use of state aircraft to become an issue when he was governor in a manner not unlike what’s happening with Noem.

State Sen. Reynold Nesiba, D-Sioux Falls, told the Capital Journal the airplane use issue led to an initiated measure and a vote by citizens to change the law.

Measure 7 passed Nov. 7, 2006 with 55% majority of voters approving it. The measure put into law that “aircraft owned or leased by the state could be used only for state business, with no exceptions.”

Rounds opposed the measure, saying: “When an opportunity arises to combine state business and a personal or family event, the governor should be allowed to do so.”

“I do think South Dakotans are conservative in that sense, in that they don’t want political office to be used for personal or political gain. That’s why this story (about Noem’s security detail accompanying her while she’s campaigning for Trump), is getting some traction.”

Nesiba emphasized, saying it several times: “The safety of our governor is paramount. She is entitled to have a security detail with her. But we should know what it costs.”

There may be further questions, he said.

“My constituents are concerned where state resources are being used, state funding is being used by the governor in this personal political campaign for President Trump. It always looks bad when one uses political office for a partisan end,” Nesiba said.

Rep. Jamie Smith, D-Sioux Falls, told the Capital Journal that he, too, wants Noem to have a security detail.

“If she’s going to be campaigning for the president, I believe her security detail should be paid for by the campaign. That work is not being done by or for the state of South Dakota.”

The Democrats said they didn’t know the troopers were with Noem on these Trump campaign trips.

“When this incident happened this week in Maine, it made us all aware that she is traveling with a security detail,” Nesiba said. “It’s important that she have security with her when she travels. . . I understand she is always our governor, always on call, 24/7. But my concern is about transparency and accountability. The governor should be transparent and say what this costs the people of South Dakota. And just be accountable, as well.”

Nesiba raised the COVID-19 pandemic as a related issue.

“We have rising COVID-19 infection rates and hospitalization rates and deaths and it’s important right now to have a voice at the state level being able to urge people to renew their personal accountability,” he said.

“I would want the governor to come back and take actions. We need to bring down the infection rate right now. To use masks and practice social distancing and avoid large gatherings, Nesiba said. “I wish she would come home.”

Little information is available from the Highway Patrol about Noem’s security detail.

“The Department of Public Safety and the Highway Patrol do not talk about security issues,” spokesman Tony Mangan told the Capital Journal via email response to questions.

In other contexts, Mangan also declines to even say how many troopers are employed by the Highway Patrol, citing security issues. Noem’s office would say very little this week about it.

As one of the state’s two U.S. senators, Rounds does not have a professional security detail with him traveling the state or his regular commutes to Washington, a spokeswoman told the Capital Journal.

Keep your crackpot governor out of our state of Maine. You're stuck with this whack job and we don't appreciate your foisting her on us.

The S.D. Republican party have a long record of abusing power. The last 2 winters Noem used a state airplane to fly loads of friends, family and business people to vacation in Tx. Her "reason" she was sending them to help with the wall. The R legislature will investigate and find no problem.