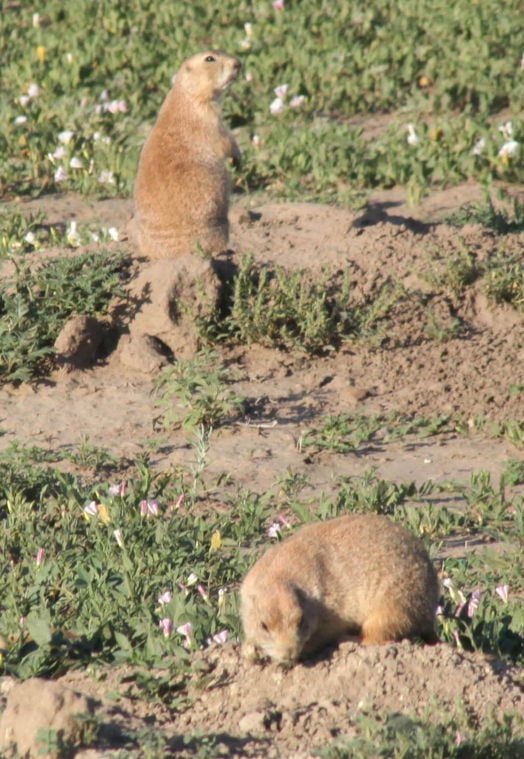 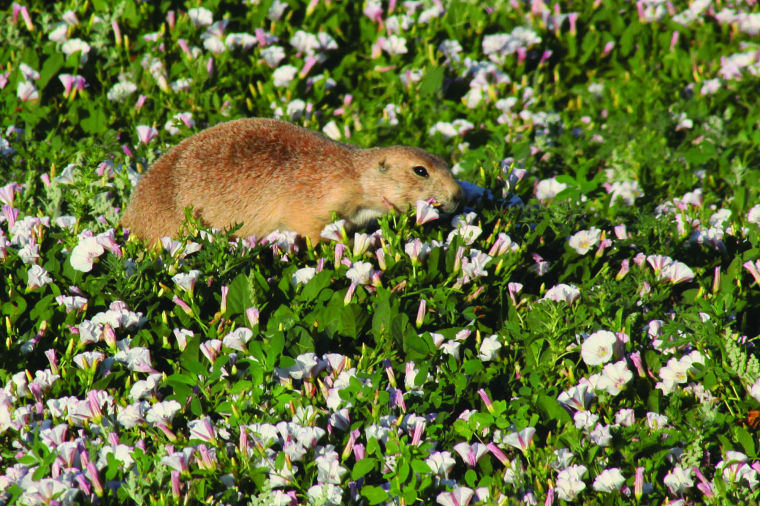 South Dakota prairie dog towns have been suffering from sylvatic plague in recent years, causing some colonies to be drastically reduced in size. 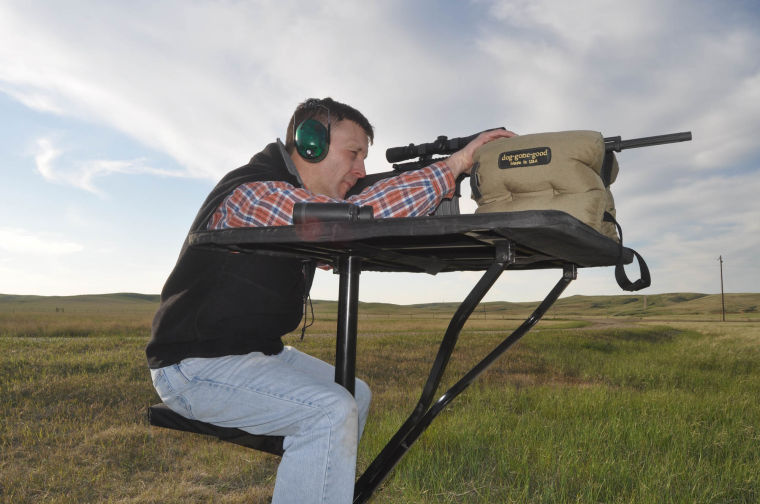 Jarrod McGinnis of Cedar Falls, Iowa, sights-in his varmint rifle on a grassland near the Bad River on Thursday, May 15, before going after prairie dogs the next day. 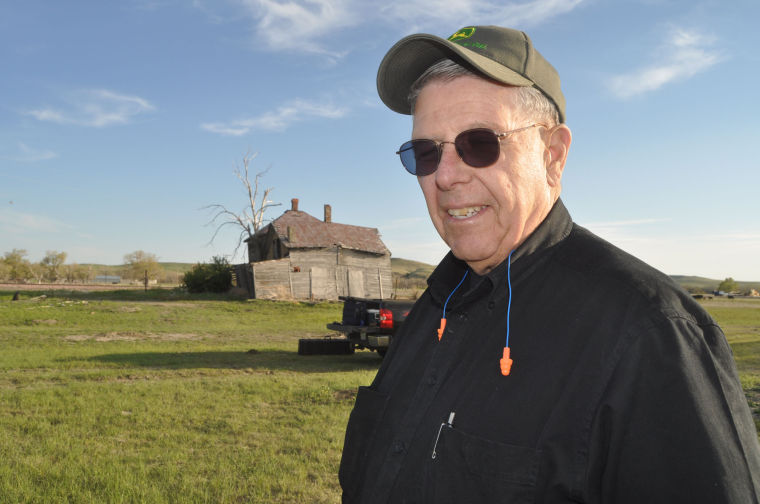 Wally McGinnis of Chillicothe, Mo., said he and his son, Jarrod, made the trek to the Bad River area to hunt South Dakota prairie dogs this year because the prairie dog locations they usually hunt in Kansas have been hit even worse by plague.

South Dakota prairie dog towns have been suffering from sylvatic plague in recent years, causing some colonies to be drastically reduced in size.

Jarrod McGinnis of Cedar Falls, Iowa, sights-in his varmint rifle on a grassland near the Bad River on Thursday, May 15, before going after prairie dogs the next day.

Wally McGinnis of Chillicothe, Mo., said he and his son, Jarrod, made the trek to the Bad River area to hunt South Dakota prairie dogs this year because the prairie dog locations they usually hunt in Kansas have been hit even worse by plague.

It’s what wildlife biologists have been observing for some time now: The plague has come to South Dakota’s prairie dog towns.

It starts with one family member showing signs of illness then another gets sick and another, before long most of the town is dead or dying.

Since about 2007 sylvatic plague has ravaged prairie dog colonies across western South Dakota. It started in the southwestern corner of the state and began slowly spreading north and east, causing colonies to nearly die out. Until recently plague hadn’t been found in the Fort Pierre National Grassland.

“We did have some colonies that shrunk considerably in size,” Mares said.

Last year at least one colony he monitors shrank from 30 acres to 5 acres. Mares won’t start looking at colonies this year until about the middle of June. But from what he’s seen, it’s not looking any better.

“What I’ve seen so far is that colonies are getting spotty,” Mares said.

South Dakota is home to vast numbers of prairie dogs and has become a premier destination for prairie dog hunters. They come from all over the country to test their marksmanship skills on the ubiquitous grassland rodents.

The hunting could get a bit tougher this year, however. Plague is destroying or drastically reducing the size of prairie dog colonies all over the grassland, while leaving others unscathed. So, prairie dog towns some hunters have successfully hunted for years might be nearly deserted this year.

“Now we have lots of people coming to Fort Pierre, so they’re competing with people that have come here for many years,” Mares said. “Shooting pressures are pretty high.”

However, there still are good places to hunt in South Dakota, as father and son team of Wally McGinnis from Chillicothe, Mo., and Jarrod McGinnis from Cedar Falls, Iowa, discovered over the weekend. They found their sweet spot in the Bad River Valley when they picked what they thought was an empty prairie to sight-in their varmint rifle and discovered the area was rich in prairie dogs. They spent the better part of two days shooting.

Wally McGinnis said the plague, oddly enough, is the very reason they are hunting prairie dogs in South Dakota this year. The places they thought about hunting in Kansas and Oklahoma are even worse off, apparently, with few prairie dogs for the hunting in some areas.

“Usually we hunt in Kansas, but prairie dogs, if you get very far south, they get the plague and it decimates them,” the older McGinnis said.

Jarrod McGinnis added that the good hunting this trip just adds to the esteem he and his father already have for the hunting opportunities in South Dakota.

“We’ve come out to pheasant-hunt in South Dakota for about 10 years now. This is our first time to come hunting prairie dogs,” he said Sunday. “We left a decent amount of change in South Dakota over the past four days.”

Quick on the rebound?

The plague also has been worse farther west so hunters who have traditionally gone to the Buffalo Gap National Grassland or western cattle ranches are now setting their sights further east, Mares said.

“In the last few years I’ve seen some dog towns almost wiped out,” Dvorak said. “Which is kind of astounding to go out there one day and see thousands and the next time there’s none. The thing that’s weird is they’ll come back pretty quickly.”

Plague probably arrived in North America on the backs of European settlers – not people, in this case, but rats, or more specifically, in the fleas that infest rats. It has been ravaging prairie dog populations in western states since at least the late 1800s.

South Dakota had been spared until about 2007, when plague first appeared in the southwest corner of the state, said Game, Fish and Parks Wildlife Damage Program Administrator Keith Fisk, who helps monitor prairie dog populations.

“People thought prairie dogs in South Dakota were immune to plague. That was not the case,” Fisk said.

Plague is likely in the state to stay, Fisk said. The disease is carried by fleas and it can be found in several different species, though mostly in rodents. That means there will likely be a lot of ups and downs in the prairie dog population in the future.

“It’s just going to be something that cycles through the environment,” Fisk said.

While the prairie dog population is most likely seeing a decline, there is little danger of losing the popular plains rodents all together. In 2008 state wildlife biologists found prairie dog colonies covered about 630,000 acres in South Dakota, Fisk said.

“I would be surprised if there was a significant drop in that,” Fisk said.

“What we’ve seen is that areas will get plagued out but it won’t kill all of them,” he said.

Dvorak has seen similar situations when ranchers poison prairie dog colonies. He said some of the rodents will be killed outright but others will survive and move to other colonies and in a few months they’ll return to their old holes.

“I think that’s why you can go in and wipe out a town with plague, and it may kill 20 percent of them. The rest of them will pack their bags and leave for another town,” Dvorak said. “I’ve seen it first hand with poison.”

For biologists the biggest threat from plague isn’t necessarily to prairie dogs themselves, but to the animals that depend on them for food and shelter such as the black-footed ferret or burrowing owl.

Dvorak said there are still more than enough prairie dogs to go around, the problem for hunters will be in finding them.

“Should a person drive from Wisconsin to Fort Pierre to have a good time? Certainly, If they’re willing to put in the leg work,” Dvorak said. “There’s still fun to be had and there’s still lots of dogs out there.”