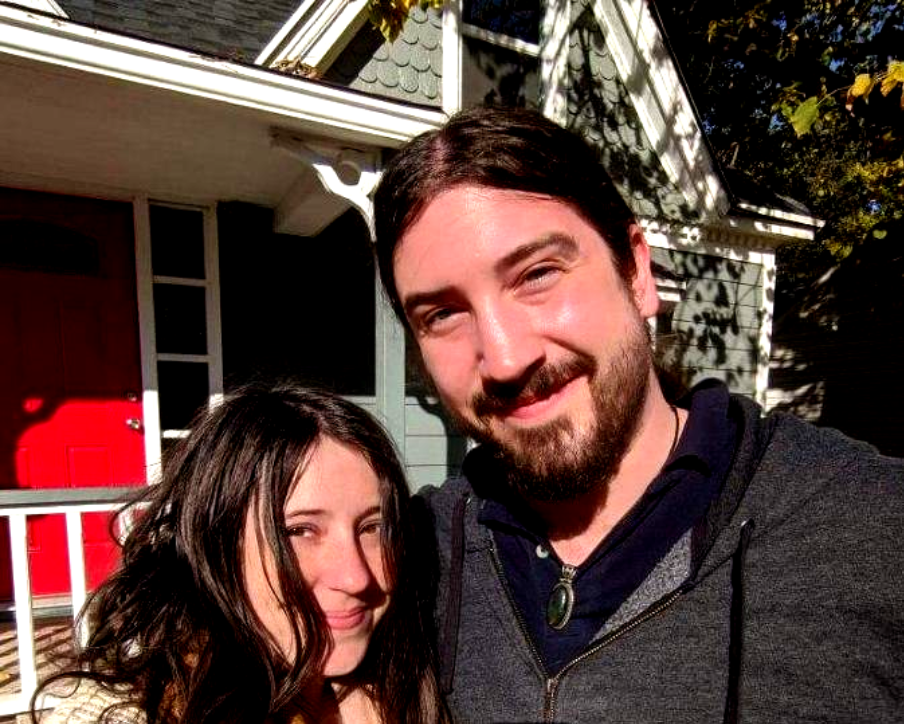 Jeanette and Nathaniel Putney pose outside their new Madison, South Dakota home in late September. The couple said they moved from Virginia Beach, Virginia to South Dakota in search of lower taxes and more personal freedoms. 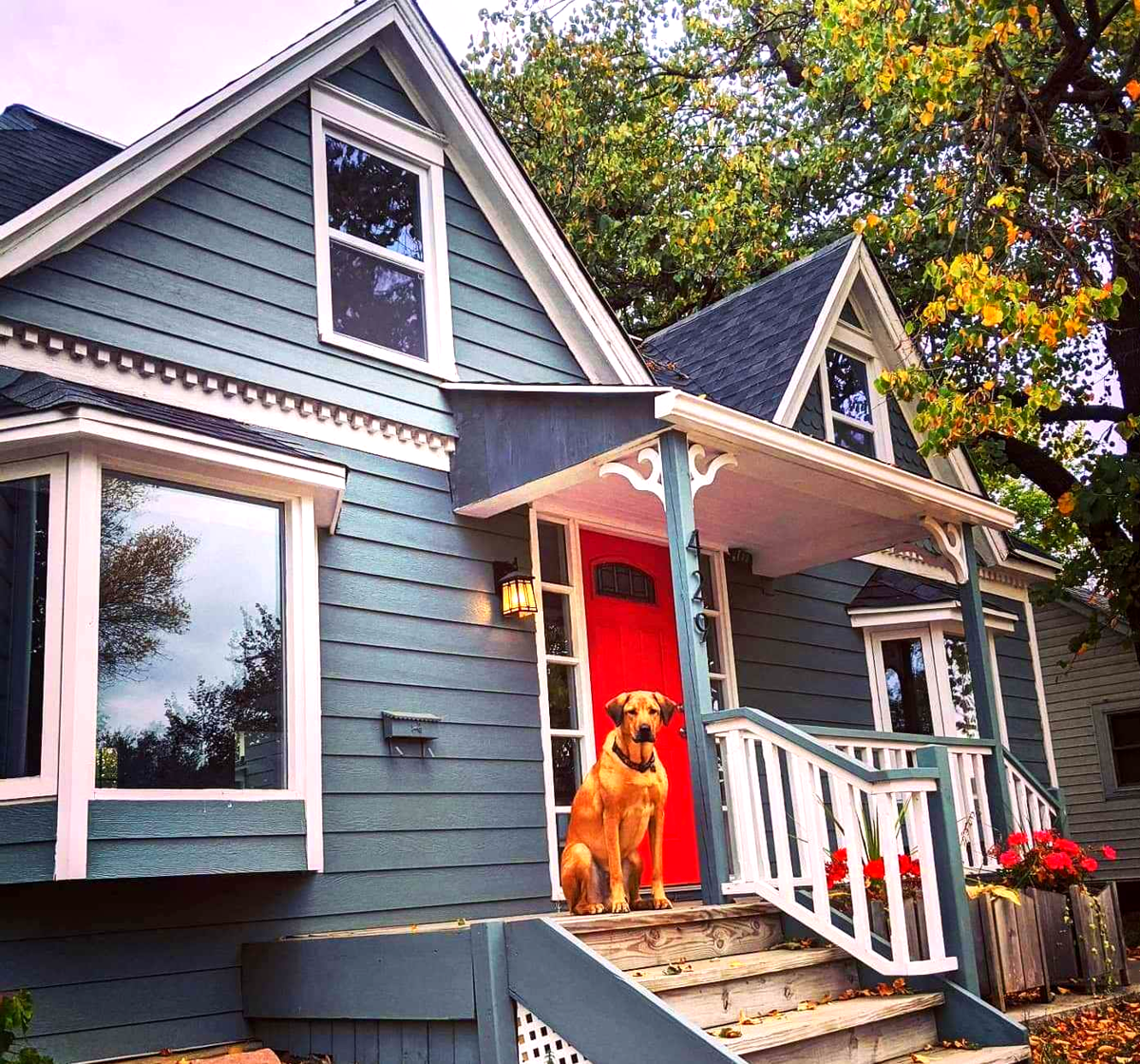 In late September, Nathaniel and Jeanette Putney purchased this home in Madison, South Dakota for roughly $145,000 in cash. The couple’s dog, Poet, sits on the front porch. 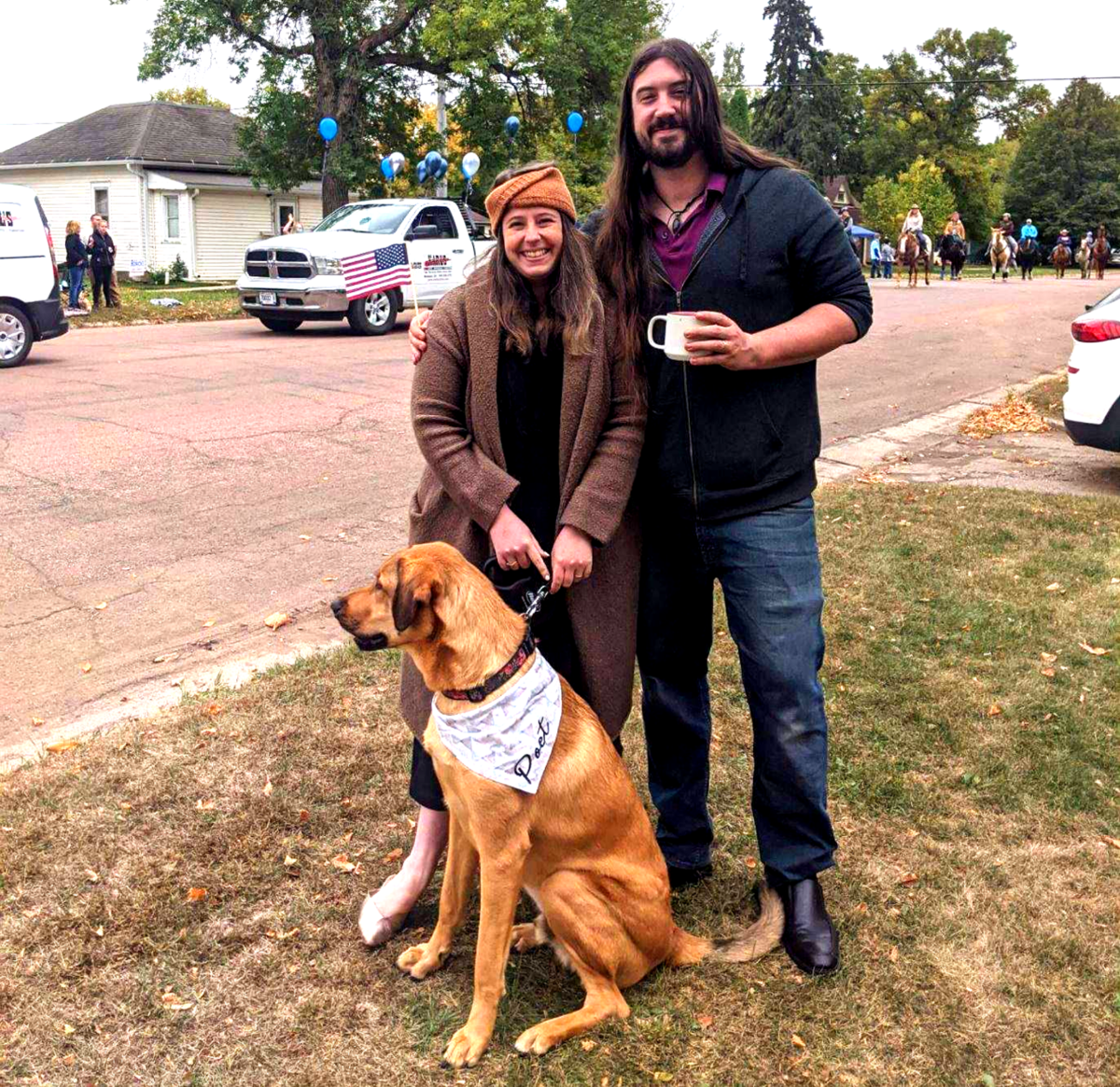 In late September, Nathaniel and Jeanette Putney purchased this home in Madison, South Dakota for roughly $145,000 in cash. The couple’s dog, Poet, sits with them.

Jeanette and Nathaniel Putney pose outside their new Madison, South Dakota home in late September. The couple said they moved from Virginia Beach, Virginia to South Dakota in search of lower taxes and more personal freedoms.

In late September, Nathaniel and Jeanette Putney purchased this home in Madison, South Dakota for roughly $145,000 in cash. The couple’s dog, Poet, sits on the front porch.

In late September, Nathaniel and Jeanette Putney purchased this home in Madison, South Dakota for roughly $145,000 in cash. The couple’s dog, Poet, sits with them.

Nathaniel Putney’s move from Virginia to South Dakota with his new wife, Jeanette, was heavily influenced by the Rushmore State’s approach to the COVID-19 pandemic, gun rights and personal freedoms.

After seeing crime rise in his Virginia Beach neighborhood for years and watching new gun regulations get passed, the last straw for Putney was his home state’s response to COVID-19.

“I didn’t really want to leave. I kind of figured maybe it would get better, but it never did,” Putney said. “I might have physically left Virginia, but Virginia left me long before.”

After losing his job, Putney started searching the internet for states with strong support for gun ownership, respect for personal freedom and which had not put many restrictions on businesses or individuals during the pandemic. Putney looked at states such as Nebraska, Montana and Utah before landing on South Dakota.

Moving to South Dakota was not easy. Neither Putney nor his wife were employed when they decided to move. They were making do with unemployment benefits and savings, which Putney learned do not count as income when applying for a lease on an apartment.

Eventually, Putney met Sarah Gross, of Keller Williams Realty in Sioux Falls, and real estate agent Mark Sorenson. They determined they could buy a house rather than rent. But without a job and a regular paycheck, securing a mortgage was out of the question.

Instead, Putney and his wife took every bit of cash they could scrape together from savings and retirement accounts, and in early September bought a house in Madison, S.D., for roughly $145,000 in cash.

“We had to give up a lot, but in doing so, frankly, God provided,” Putney said.

Putney and his wife moved into their new home on Sept. 25. The move came just in time for Putney to start a new job as a technician at Mid States Audio & Visual, a job Gross helped him find. The pay is a little lower than what he was making in Virginia, but between not making mortgage or rent payments, a lower cost of living and not paying a state income tax, Putney said he may make a higher net income.

The InfluxRealtors in South Dakota have seen a steady increase of people seeking more affordable housing and more personal freedoms by moving to South Dakota amid the pandemic, even as the state has seen a sharp rise in the number of active COVID-19 cases, hospitalizations and deaths.

Many new home buyers have been lured to the state, real estate agents say, by traditional benefits of South Dakota living such as the lack of a state income tax, relatively low property taxes and home prices, safe neighborhoods, a small-town vibe and access to wide open spaces. A new, pandemic-driven trend of employers allowing or requiring employees to work remotely from their homes has also boosted the ability of homeowners to relocate to South Dakota without changing jobs.

But agents say the rise in relocations has also been fueled by the refusal of state and local government officials in South Dakota to impose mask mandates and business closures during the COVID-19 pandemic. A state government effort to recruit people and businesses to relocate to South Dakota from Minnesota has also contributed to the strength of the state housing market, realtors say.

The two biggest housing markets in South Dakota — in Sioux Falls and Rapid City — have seen a rise in interest by potential home buyers from all across the U.S, local agents say. The average prices paid for homes have risen in both markets; houses are spending fewer days on the market; and there are as many as 30% fewer homes for sale due to increased demand.

Some eager out-of-state buyers are making offers on homes sight-unseen.

“I heard the other day that there’s an agent that wrote up three offers where, basically, the client has never seen the property because they know the market is so hot,” said Larry Luetke, president of the Realtor Association of the Sioux Empire, based in Sioux Falls. The association tracks home sales in the Sioux Falls region and said home sales are strong.

The Black Hills region has long attracted people outside of South Dakota as a retirement or lifestyle destination, so there has always been movement to the area. The pandemic, though, appears to have pushed more people to take early retirement or look for a less-crowded place to live.

“We are absolutely seeing a little bit more action coming from the West Coast and even from down further south,” Anderson said.

Gov. Kristi Noem has said she is not surprised more people are interested in moving to South Dakota. In an Oct. 12 interview with Moorhead, Minnesota radio station WZFG, Noem said her decision not to mandate mask-wearing or shuttering of businesses during the pandemic has attracted both new companies and new residents to the state.

The Noem administration has also launched a multi-million dollar ad campaign to lure businesses from Minnesota into South Dakota based partially on Noem’s handling of the pandemic. The campaign also notes South Dakota does not have a state income tax, has low property taxes and has a business-friendly regulatory climate.

“And there’s a governor in South Dakota that isn’t going to shut your business down or take your rights away,” Noem said.

The surge in home buying comes as South Dakota’s COVID-19 infections are peaking. As of Oct. 14, there were more than 6,000 active cases of COVID-19 in South Dakota, 303 people were hospitalized due to the disease and 288 people had died.

While critics point to Noem’s laissez-faire approach to the pandemic as one of the driving forces behind South Dakota’s rising numbers of COVID-19 infections and deaths, her policies have also played a big role in the strength of the real estate market, Luetke said.

Many of his new clients say South Dakota’s refusal to mandate masks or shut down businesses were among the top reasons they chose to move to the state, Luetke said.

Gross said she is working with four clients who are leaving larger, urban areas for South Dakota. One of Gross’ new clients is in her 20s and left a job and a downtown apartment in Portland, Oregon, to relocate to Sioux Falls. Another couple is trying to sell their home outside Minneapolis and is looking to build a new home near Sioux Falls, Gross said.

Another factor driving the increase in South Dakota home sales is the number of companies allowing or requiring employees to work from home. Several of Luetke’s new out-of-state clients are former South Dakotans who moved away for work but have come back during the pandemic, some seeing a financial benefit along the way.

Nationally, the pandemic has spurred interest in moving out of big cities, said Lawrence Yun, chief economist for the National Association of Realtors. The association’s regular surveys of realtors have shown a burst of home buying in outer suburbs, small towns, and historic vacation destinations. Buyers, Yun said, are looking for larger homes with more space that are more affordable than similar homes closer to cities.

“States like South Dakota, I think, will be the beneficiary of this because of the abundance of land and plentiful affordable homes,” Yun said.