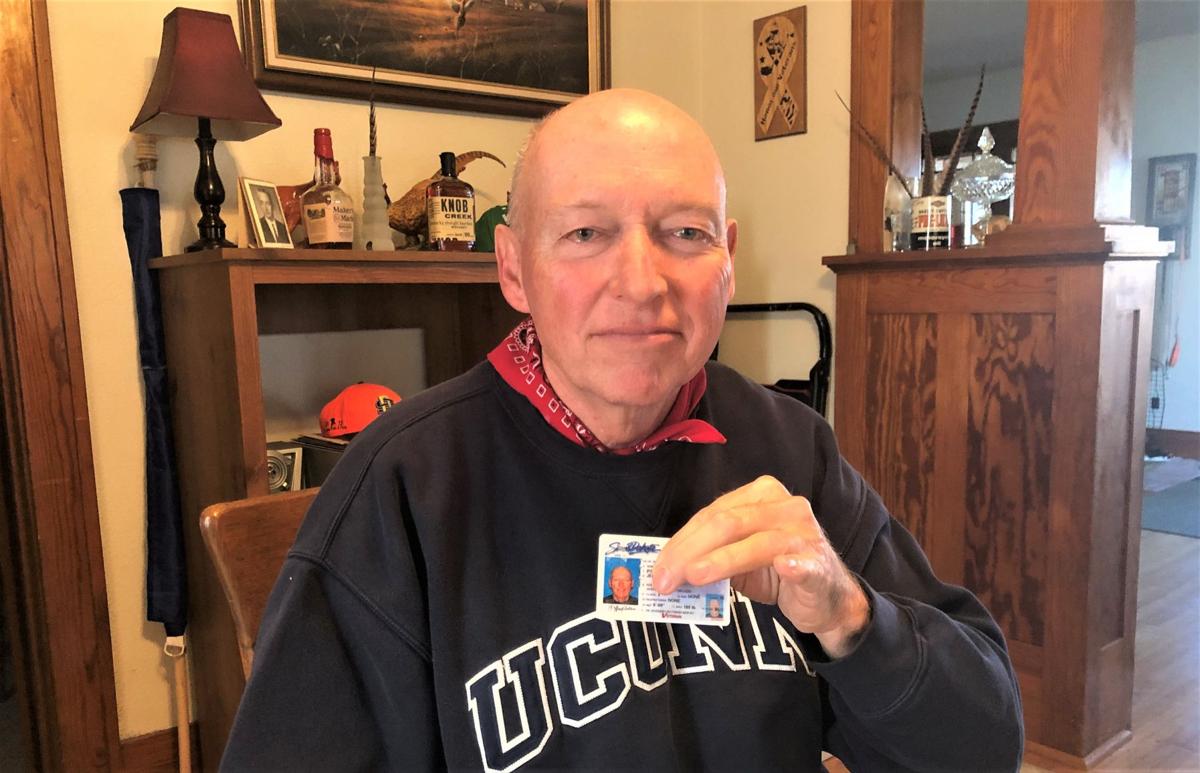 Jeffrey Peters holds his South Dakota driver's license while sitting at the kitchen table of the home he owns in White Lake, S.D. Peters said his life was turned upside down by the state when it investigated him and charged him with illegally getting resident hunting licenses.

This is the home that Jeffrey Peters co-owns on North Main Street in White Lake, S.D. This photo is one of dozens taken by a state Game, Fish & Parks investigator who sought to show that Peters did not live in the home enough to qualify as a state resident.

Jeffrey Peters holds his South Dakota driver's license while sitting at the kitchen table of the home he owns in White Lake, S.D. Peters said his life was turned upside down by the state when it investigated him and charged him with illegally getting resident hunting licenses.

This is the home that Jeffrey Peters co-owns on North Main Street in White Lake, S.D. This photo is one of dozens taken by a state Game, Fish & Parks investigator who sought to show that Peters did not live in the home enough to qualify as a state resident.

The legal language describing who qualifies as a South Dakota resident when it comes to in-state hunting privileges is laid out in state law, but the real-world definition is now murkier than ever.

A recent drawn-out, highly charged criminal case in South Dakota could have further defined residency, particularly when it comes to so-called “snow birds” or part-time residents. Instead, the case has done the opposite, adding confusion rather than clarity to what it takes to become a resident and upending the life of a retired combat veteran along the way.

The recently settled criminal case in Aurora County has left the retired optometrist and veteran outraged and feeling persecuted, and has left state game officials and a local prosecutor disappointed that they were unable to convict the doctor of fraudulently obtaining resident hunting licenses.

Neither side of the equation says it feels good about the outcome of the case that involved an extensive two-year state investigation and cost the doctor nearly $20,000 in legal fees, and which even swelled to involve Kelly Hepler, secretary of the South Dakota Game, Fish & Parks Department.

The case has also called into question the language in the GFP “Hunting and Trapping Handbook” — of which 180,000 free copies are distributed annually — that guides people on how to qualify as a legal resident for hunting Purposes.

The defendant in the 2019 case was Jeffrey Peters, 64, a retired optometrist and a lieutenant colonel who served 30 years combined in the Army and National Guard, including a stint with the 101st Airborne Division in 2003-04.

Peters was born and raised in Stickney, S.D., graduated from South Dakota State University, and spent most of his career as an optometrist in Colorado. Peters owns 581 acres of pastureland in Aurora County, and Peters’ goal in 2017, he said, was to shift his life back to South Dakota in retirement, including establishing residency and hunting on his farm.

But, because Peters still has a home in Colorado where his wife still lives and where he spent most of his time from 2017 to 2019, a local GFP game warden, his supervisors and the Aurora County state’s attorney became determined to prove that Peters was not a legal South Dakota resident and had committed fraud.

Their certainty that Peters had violated the law led them to engage in an investigation that lasted nearly two years, delved deeply into Peters’ life and cost untold thousands of state dollars.

Before filing four misdemeanor charges against Peters in November 2018, state investigators obtained nearly two years of Peters’ cellphone records and correlated which cell towers were pinged. They drove by his South Dakota house at least 27 times and took 65 photos. They tracked his Facebook use. They interviewed his neighbors in White Lake and a contractor who worked on the property. They obtained real estate transaction and utility usage data. They recorded phone calls between Peters and an investigator. They examined UPS delivery information to both his homes. And, they sent a state investigator to the Denver area in a failed attempt to interview Peters’ wife.

Peters called the investigation and prosecution “a nightmare” that has cost him more than $18,000 in legal fees, prevented him from hunting on his own land and shaken his faith in the GFP and the local prosecutor’s office.

“It’s been a circus, a disgraceful circus what they put me through, an annoyance and a frustration for two full years,” Peters said.

David Jencks, the Madison, S.D., attorney who represents Peters, said the state wanted to use Peters and the fact he owned a home elsewhere to set an example and clarify what he called “vague language” in state hunting-residency laws. He called the state’s prosecution “arbitrary and capricious” and said he believed the case somehow became personal for the local game warden and prosecutor, and ultimately led to an unreasonable level of investigation.

“This wasn’t a rape or a murder or a million-dollar fraud, and in all my years I’ve never seen even close to this level of effort put forth on a misdemeanor case,” Jencks said.

In the end, just days before a trial was about to begin in September 2019, the four charges against Peters were dropped, and the state offered a plea agreement to a single, lower misdemeanor administrative count of “applying for a license when ineligible.” On the advice of Jencks, Peters pleaded no contest, paid $310 in fines and court fees and did not lose his hunting Privileges

Aurora County GFP conservation officer Lynn Geuke led the investigation into Peters’ residency. He refused to speak to News Watch, but did say of Peters in a brief phone call, “Well, he was convicted.”

John R. Steele, the Aurora County State’s Attorney at the time of the Peters prosecution, pointed out that Peters had taken a homestead tax exemption on his Colorado property and that Peters had a prior misdemeanor conviction for illegally obtaining a resident hunting license in Lake County, S.D. Peters pleaded guilty to that charge in 2016 and received a suspended

imposition of sentence, effectively sealing the records from public view.

Peters said he had researched residency laws before applying for that resident license and believed at the time he was in compliance by claiming residency at his brother’s house in Madison, but now acknowledges that he likely was mistaken. He said he learned a lesson from that incident and sought in 2017 to obtain residency legally according to guidelines in the hunter handbook.

The cellphone information tracked by the state indicated that Peters spent 52 days in South Dakota in 2017 and 67 days in 2018, according to records obtained by News Watch.

In an interview and a subsequent letter to News Watch, Steele said that given the results of the investigation, he and the GFP did not consider Peters a resident for hunting purposes, and that the prosecution was based on that decision.

Steele acknowledged that South Dakota hunter-residency laws as written create “a gray area that involves making some judgment calls” and that Peters’ dual residency became “the nub” of the case. “The law speaks of residence, where you actually live ... you can do everything on the checklist but if you don’t live here, you’re not entitled to resident hunting privileges,” said Steele, who resigned as Aurora County state’s attorney in January and now serves as an unpaid deputy in the state’s attorney’s office.

Emmett Keyser, southeast regional supervisor for the GFP Division of Wildlife, said residents of South Dakota enjoy several opportunities for hunting that non-residents do not, such as being able to hunt waterfowl and pheasants in longer seasons or to hunt bighorn sheep or mountain goats.

“It’s important to note how passionate residents are in protecting those opportunities and ensuring that people do not attempt to fraudulently become residents,” he said.

Peters and his attorney say Peters followed the law as laid out both in the hunting handbook and state statutes. Before applying for a resident deer license in 2017, Peters bought a house in

The critical definition in Peters’ case, and the one that the case could have clarified, is that of “domicile.” The law states: “A person’s domicile is that person’s established, fixed and permanent home to which the person, whenever absent, has the present intention of returning.”

Jencks notes that nowhere does the law say how many days a year a person must live in the domicile, or whether the person needs to stay there for any specific period of time.

Less than two weeks before the start of the Sept. 30, 2019, trial, Jencks filed a subpoena asking the court to require GFP Secretary Hepler to appear in court to explain how GFP defines a resident and explain who authorized such an extensive investigation. The state tried to quash the subpoena, but the judge denied the state’s motion.

Just prior to the trial, Steele offered to drop the higher charges and offer Peters a plea deal with no jail time, a small fine and no loss of hunting privileges. It was also agreed that Peters would be able to hunt as a resident moving forward.

In an interview with News Watch, Hepler said he was aware of the Peters case but only because he was subpoenaed to testify. None of the decisions surrounding the case or investigation rose beyond the level of regional GFP supervisors, Hepler said. Hepler said that to his knowledge, his subpoena had nothing to do with Peters’ being offered a reduced charge before trial.

“I would have appeared, but I thought it was foolish because I had no interaction with these people whatsoever,” Hepler said. Steele would not discuss his reason for offering a plea. Keyser noted that the Peters case could have set precedent in clarifying the definition of residency.

“In his defense, Mr. Peters has attempted to look at all the facts and try to meet all these standards as best he can, but it still boils down to whether his domicile is in South Dakota or in Colorado, and it can only be one,” Keyser said.

After the case, Steele took the unusual step of authoring a new set of residency guidelines called, “Prosecution standards for part time residents seeking SD hunting licenses.” Steele told News Watch the guidelines are “an internal policy” in place only for Aurora County and that the policy was distributed only to Jencks, Peters, Geuke and Steele’s staff.

However, the local policy includes elements of residency that are not addressed in state law, such as defining “dwelling” as a structure with permanent electrical service, an indoor, functional kitchen and bathroom with hot and cold running water, and a sewage connection.