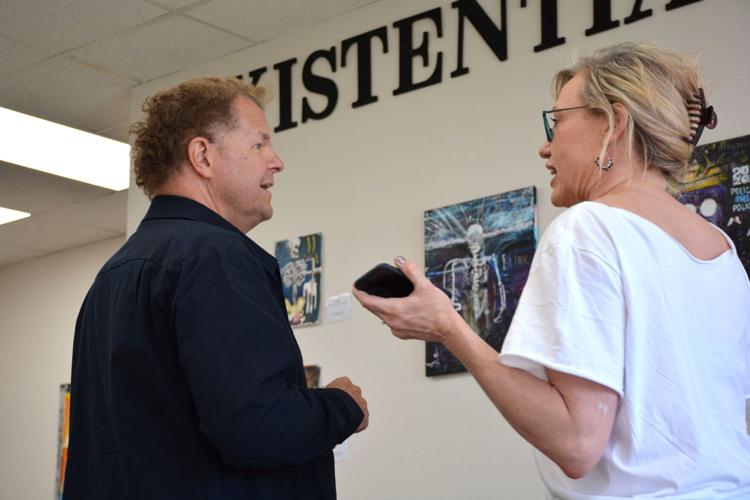 Randy Doty talks about his work on display with Jennifer Kanz on Saturday. 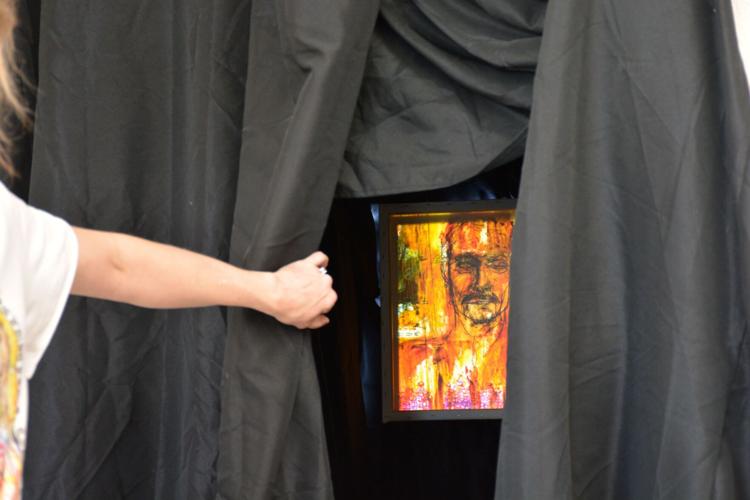 Jennifer Kanz hold the curtain back on one piece where a person would enclose themself in the dark to view. 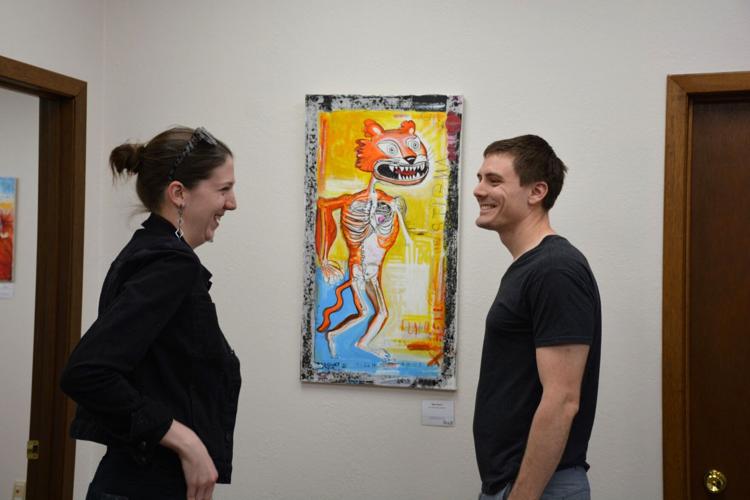 People had a chance to walk around the Waterfront Gallery for the Arts on Saturday during its official opening day with Sioux Falls artist Randy Doty's work on display.

Randy Doty talks about his work on display with Jennifer Kanz on Saturday.

Jennifer Kanz hold the curtain back on one piece where a person would enclose themself in the dark to view.

People had a chance to walk around the Waterfront Gallery for the Arts on Saturday during its official opening day with Sioux Falls artist Randy Doty's work on display.

Art can make you think and challenge your emotions or preconceived notions of art. And on Saturday, the Waterfront Gallery for the Arts did just that during its first reception.

Sioux Falls artist Randy Doty was featured at the event.

His work is raw, abstract, even humorous at times, while also veering into horror and absurdity.

“(It’s) maybe a little intense. Some of the color and imagery is a little bit not for everyone’s palette,” Doty said.

Doty’s work is also intentional in its delivery. His piece “Transcendental Michael” depicts a large humanoid-creature, torso visible over the horizon, seemingly approaching the viewer. The gray, emaciated looking creature is contrasted by the blues, oranges, yellows and reds surrounding it.

“Loki,” another of Doty’s works, depicts a slim, cartoonish-looking person adorned with a viking helmet. The face is a combination of cartoon and horror with a mangled mouth and oversized, bulgy eyes. The background is composed of sinister purples, reds and blacks.

At the same time, there’s something kind of humorous about it. The piece wouldn’t look out of place on the popular adult animation block Adult Swim.

“People read the paintings sometimes and they start to laugh and I kind of appreciate that they see the humor in some of the stuff that I’m trying to do,” Doty said

Doty’s work was received well by curious attendees, selling three pieces. The showing had interactive portions where attendees could play with perception and lighting to change how a piece is viewed.

The Waterfront Gallery for the Arts owner Jennifer Kanz said her daughter was challenged by Doty’s work.

The answer to that question was the raw, soul-bearing nature of Doty’s work that exposes the emotions of the viewer.

Kanz said the showing was a success.

Although Saturday was the gallery’s first artist reception, it hosted a soft-opening in April in collaboration with the Pierre Players Community Theatre.

A lifelong artist and performer herself, Kanz likened the experience to the many performances she’s participated in.

“I’ve been putting on shows and directing plays and doing dance recitals my whole life. This is kind of the same thing only the actors aren’t moving around and talking … your actors are hanging on the wall and not running around on the stage,” Kanz said.

Doty and Kanz were connected through mutual friends. From the second Kanz saw Doty’s work she knew she had to display it in Pierre.

“He was the friend of a friend and I had never seen his work and I saw it and was like, ‘Oh holy crap, I have to have this in my gallery.’ I didn’t care if it was the first show or the last show or the tenth show of the year, I didn’t care, I just had to have it,” Kanz said.

Doty didn’t need any convincing to participate in the showing.

“Jennifer was getting things started at the waterfront, so she invited me to show out there as her first artist. I’m really honored to be a part of that,” Doty said.

The Waterfront Gallery for the Arts was Doty’s second showing. He previously showed work at the Post Pilgrim Gallery in Sioux Falls.

For Kanz, it’s been a months-long journey preparing the gallery for its first artist reception. Even prior to that, she had spent years mulling over the idea. A full-time massage therapist, Kanz decided to take the plunge and open the gallery.

Kanz has a number of friends and supporters who have encouraged her along the way.

One of those friends is Michael Winger. Winger, an art teacher at Georgia Morse Middle School, is Kanz’s neighbor. He’s encouraged her and helped behind the scenes to turn a dream into reality.

“I met Jen and we became good friends. She went into an apartment next door to me and we would have conversations about art and she started painting. I would encourage her and she went pretty much crazy in the apartment. It turned into a studio. She painted on the walls, the floor, the canvas, everywhere. It was just very exciting to see and I told Jen, ‘This is like walking into a gallery,’” Winger said.

Winger has shown art in Brooklyn, New York, and Washington D.C. and knows the importance of providing space for all artists.

“It’s kind of getting off the ground now, as far as the art scene goes. There’s a lot of artists tucked away in the hinterlands all over Pierre and in South Dakota in general that are doing kind of different work. We just thought it’d be great to have a place and an opportunity for some of these artists to show their works,” Winger said.

Winger and Kanz both hope to use the gallery to showcase student artwork in the future.

“There’s a lot of talent in the middle school and high school and I frankly haven’t done enough to get the kids’ work out there … we just want a venue out there for our students who are creating wonderful things,” Winger said.

The success of the showing has invigorated Kanz and has her head spinning with future ideas for the gallery. Her goal is to showcase all kinds of art from photography to poetry to metalworking and more

“When I’m done doing something, whether it’s a dance recital or play or whatever, there’s always a few days afterwards where it’s like, ‘Ah, I can rest now for a while.’ But in this case, it was more like ‘I’m so pumped.’ I’m physically exhausted, but my brain, I’m so wound up still,” Kanz said.

Kanz is still refining the gallery experience and asked for patience as she incorporates audience feedback and refines the experience.

If you missed Doty’s work on Saturday it can still be viewed until around June 5. You can contact the gallery at waterfrontgallery@midco.net or 605-494-1004 for a viewing. Gallery hours are currently limited.

The Waterfront Gallery for the Arts will host Dupree, South Dakota, artist Maxwell Peacock on June 11.

“You can’t ask for anything better. The experience as a whole was just wonderful,” Kanz said.


Thanks for the feedback.