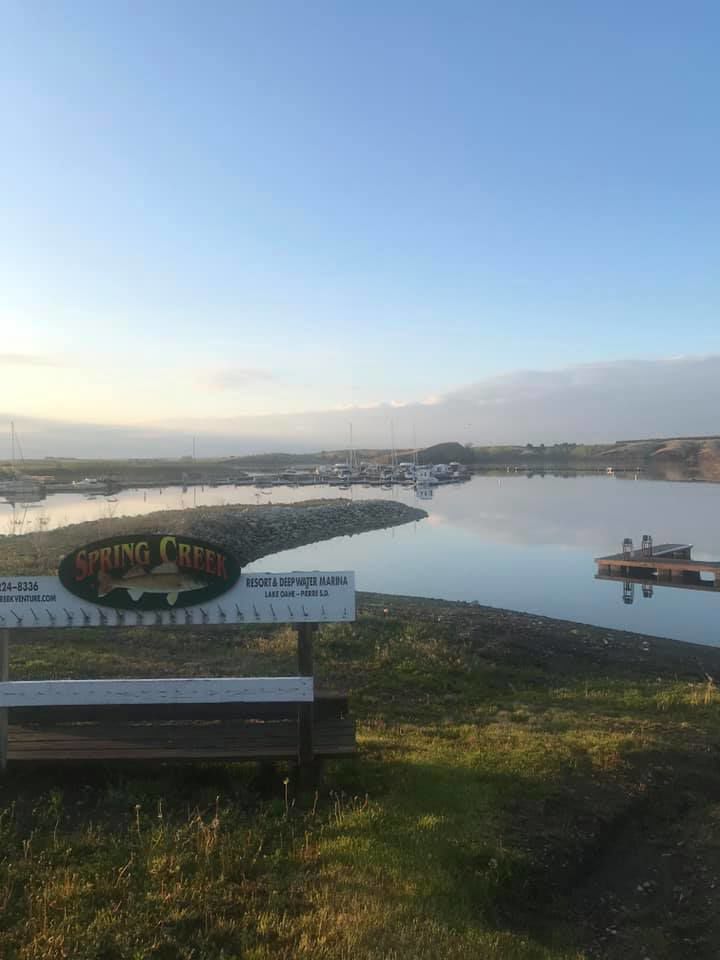 Shown is the South Dakota Game, Fish and Parks sign at Spring Creek resort 17 miles northwest of Pierre and Fort Pierre. The restaurant and bar opened again Friday, May 22, after members of the Hughes County Commission conducted a special meeting Friday to approve transfers of liquor and beer/wine licenses for the new lessee. 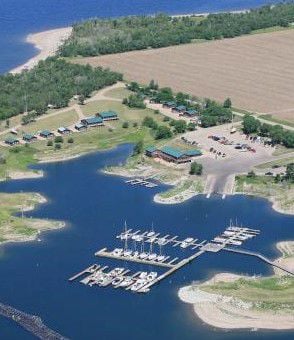 The Spring Creek restaurant and bar are in the middle of this photo of the entire resort/marina complex on Lake Oahu, 17 miles northwest of Pierre and Fort Pierre.

Shown is the South Dakota Game, Fish and Parks sign at Spring Creek resort 17 miles northwest of Pierre and Fort Pierre. The restaurant and bar opened again Friday, May 22, after members of the Hughes County Commission conducted a special meeting Friday to approve transfers of liquor and beer/wine licenses for the new lessee.

The Spring Creek restaurant and bar are in the middle of this photo of the entire resort/marina complex on Lake Oahu, 17 miles northwest of Pierre and Fort Pierre.

The Hughes County Commission held a special meeting Friday morning to help make sure the new operator and lessee of the Spring Creek Restaurant and Bar could be in business by Friday evening for the kickoff to summer.

“He wanted to be able to be open for this weekend,” Commissioner Norm Weaver said about the special meeting for the resort/marina setting 17 miles northwest of Pierre and Fort Pierre, via Highway 1804 to the shore of Lake Oahe.

Weaver was talking about Jeremey Frost, who was on a conference call Friday morning with the county commission, which approved transferring two licenses from the state Game, Fish and Parks to Frost Enterprises doing business as Spring Creek restaurant and bar.

“We signed the lease this week,” he said.

South Dakota Game, Fish and Parks owns the resort comprising a marina, convenience story and gas station and cabins, as well as the restaurant and bar.

GFP has tried to market the entire operation after the former lessee, Spring Creek Ventures LLC, which had leased it since 2008, gave up the lease in early 2018.

Game, Fish and Parks tried to sell the resort in 2018 and said it was appraised at $1.7 million. Then last year, officials again tried to lease out the resort. Some months ago, with no takers, the state agency decided to manage the marina, convenience store/bait shop and cabins and lease out just the restaurant and bar.

Frost, who has been involved in the restaurant and bar business before, signed on.

“Game, Fish and Parks is doing everything, but the restaurant and bar,” Frost said.

Frost said his establishment’s hours will be 4 p.m. to about midnight.

He worked years for CHS elevator in Onida and now has his own grain marketing firm, Fearless Grain Marketing in Onida and Gettysburg, Frost said.

This new Spring Creek venture is a Frost family deal, he said.

Daughter Dani and younger son Christian, also are putting in hours, he said. "Christian worked on the kids' menu."

Keith Erickson, the same chef who has worked at Spring Creek for some time, is in the kitchen, Frost said.

The walleye dinners for which the place is known will still be there as is prime rib and he’s adding pasta bowls to the menu, Frost said.

Although their beer, wine and liquor licenses allow for off-sale, like a package store, their operation isn’t set up yet to handle off-sale yet, Frost said.

Frost seems ready for the challenge of opening a restaurant during this historic pandemic. The timing seems right as other restaurants are reopening across the region after being closed for two months or more because of concerns about the COVID-19 spreading by social contacts such as restaurants.

There may be other challenges, too.

The previous lessee left because of declining revenues.

Game, Fish and Parks showed the numbers that had shown less business in recent years.

In its prospectus sent out months ago for the restaurant food services at Spring Creek, Game, Fish and Parks released figures showing the restaurant and bar averaged gross revenues annually of about $189,000 for the 11 years 2009-2019.

The bar side of the business averaged $48,095 per year, about 25.4% of the gross revenues of the restaurant/bar business over the 11 years, GFP said.

The bar revenue slipped through the years a little more than the restaurant’s revenue did, averaging $39,662 the last four years, which was 24% of the total gross revenue.

Game, Fish and Parks added a note to the revenue figures that they may be "under-represented" because they don't necessarily reflect meals included in the resort's "hunting/fishing packages."