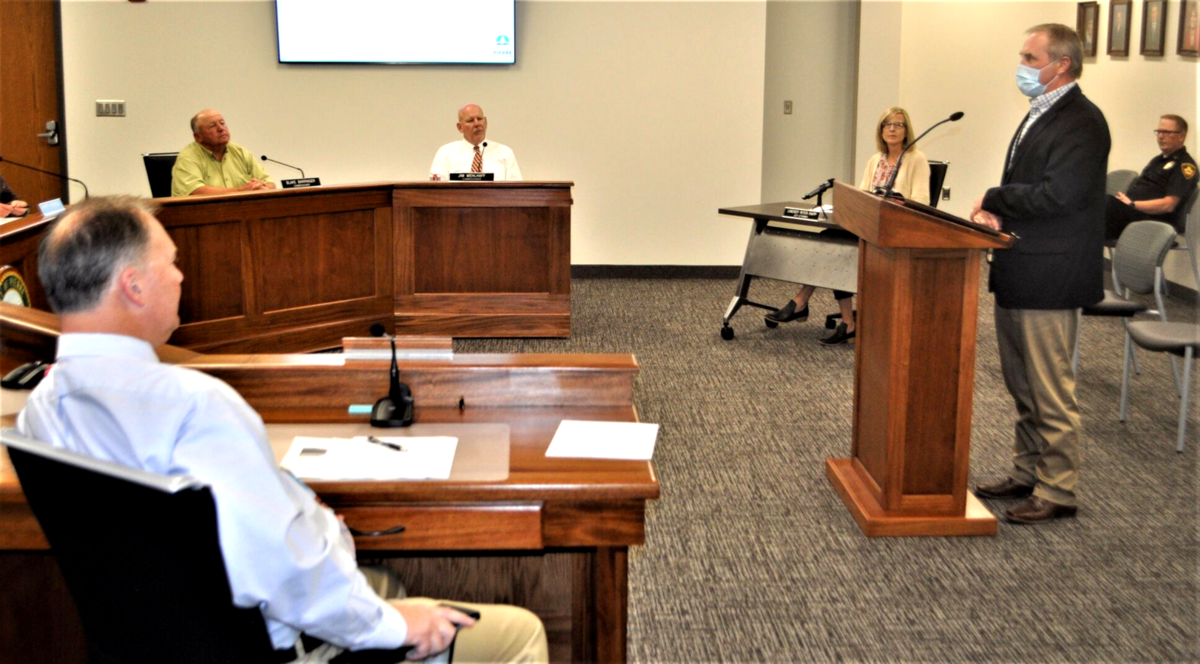 Dr. Mikel Holland, chief medical officer at Avera St. Mary's Hospital in Pierre, tells Pierre City Commission members on Tuesday, Oct. 13, that despite growing numbers of COVID-19 cases, the hospital is much better prepared to handle the pandemic than it was a few months ago. He said last week the hospital had eight patients with COVID-19; on Tuesday, three cases. From left are Commissioners Jamie Huizenga, Blake Barringer and Jim Mehlhaff. City Attorney Lindsey Riter-Rapp and Police Capt. Bryan Walz are on duty in the background. 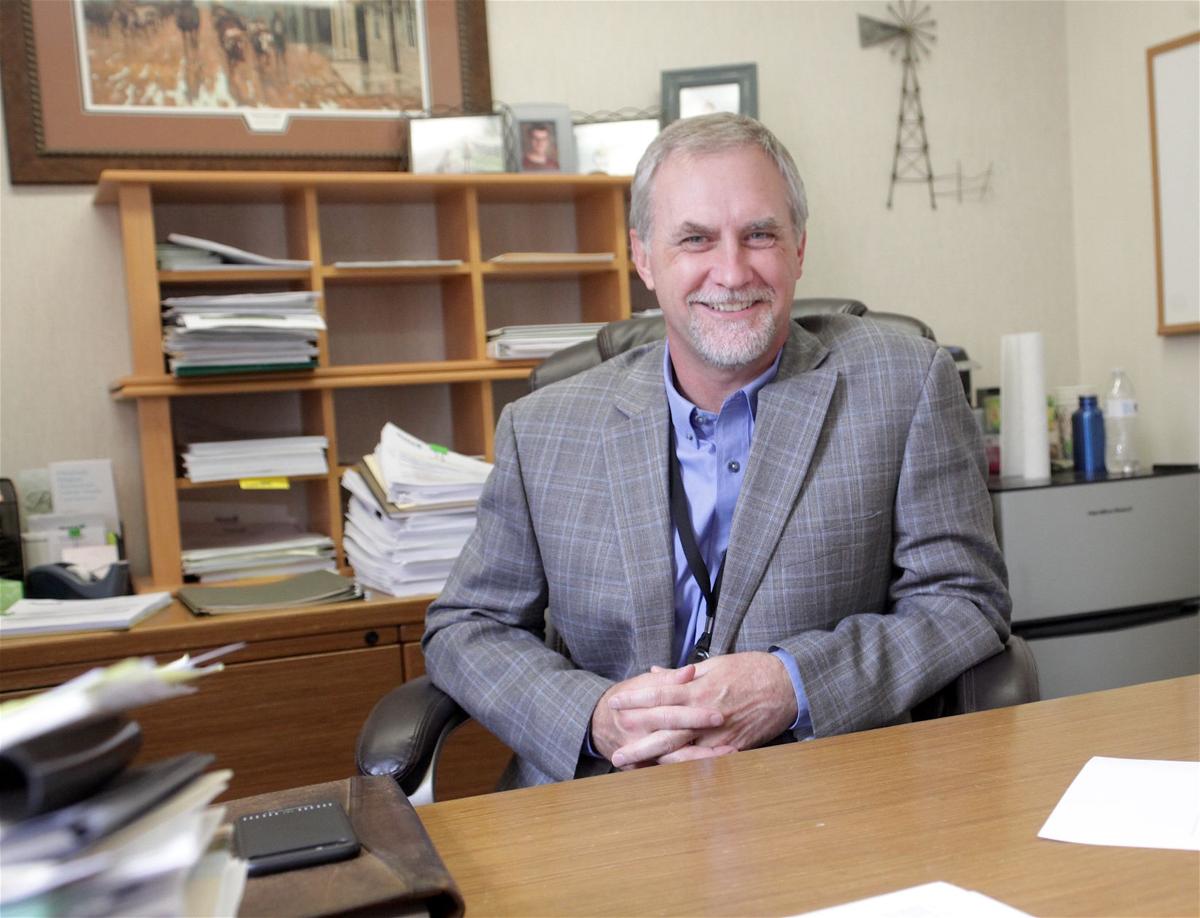 Dr. Mikel Holland, chief medical officer at Avera St. Mary's Hospital in Pierre, tells Pierre City Commission members on Tuesday, Oct. 13, that despite growing numbers of COVID-19 cases, the hospital is much better prepared to handle the pandemic than it was a few months ago. He said last week the hospital had eight patients with COVID-19; on Tuesday, three cases. From left are Commissioners Jamie Huizenga, Blake Barringer and Jim Mehlhaff. City Attorney Lindsey Riter-Rapp and Police Capt. Bryan Walz are on duty in the background.

The steady increase in COVID-19 infections for the Pierre area -- and South Dakota as a whole -- during the last six weeks or so had professionals wondering if they could handle it, Dr. Mikel Holland of Avera St. Mary’s Hospital in Pierre, told the City Commission on Tuesday.

Mayor Steve Harding asked Holland to give the Commission and the city an update regarding the situation, something that Harding has been doing on a weekly basis.

Holland, who is president and chief medical officer of Avera St. Mary’s and a family medicine specialist, said when the pandemic first hit America this spring, “what we saw on the East Coast and the West Coast was frightening.”

It was soon clear that St. Mary's, as with nearly all hospitals, lacked certain equipment and supplies that would be needed if the pandemic came in as a worst-case scenario, according to Holland.

But officials have coped and made many changes and are much better prepared now, Holland said. This includes being ready for whatever new vaccine there is for this deadly coronavirus whenever it becomes available, Holland said.

"We have freezers that go down to negative 70 degrees," that are ready to store the vaccine as soon as its available, he said. The large Avera Health System is a force for St. Mary's to be in line to receive the vaccine when possible, he said.

South Dakota and Pierre had a long lull of sorts in which the pandemic didn't seem to ring up significant numbers.

But toward late summer, it soon became the case that the hospital had one, two or three patients with COVID-19 any week. “Some weeks, we would go without seeing one,” he said.

In early September, cases multiplied, Holland said. “Then, we started to see the numbers rise all around us, in the Midwest and here as well.”

“We have been busy, seeing patients with COVID-19 infections. The last couple weeks have been quite busy. We are looking at some of those surge plans we were looking at last spring, about, 'how do we handle more patients?.'”

As the public schools began the new year, and the state Women’s Prison in Pierre had a rather sudden outbreak involving more than 100 inmates, the pressure mounted, he said.

A big difference is the hospital, as well as all the health systems in the state, are much better prepared and capable of dealing with a growing number of COVID-19 cases, he said.

Fortunately, young people generally appear to not be gravely affected when getting COVID-19.

“We have had a couple of Women’s Prison prisoners in the hospital as well, but we have not been overwhelmed.”

“Last week, we hit a point where we were pretty full,” Holland said. “We wondered if we would have to look at the surge plans we did last spring.”

Those plans could include reducing elective surgeries and other health care in order to provide more room and staffing for COVID-19 cases, Holland said.

So far, no serious juggling of medical care or staff or patients has been necessary to cope with rising COVID-19 numbers, Holland said.

Commissioner Jim Mehlhaff asked Holland if the hospital was near its capacity limits for patients.

The way hospitals treat patients has changed so much, with shorter hospital stays in so many cases, Holland said. It’s all a complicated equation, he said, of “how many hospital beds and rooms do we have and what staff do we have.”

“Last week, we were pretty full. We had 22, 23 (total) patients and we were pulling staff from other areas. We were up to to eight patients with COVID-19 last week. Now, today, we were down to about three (COVID-19 patients) again. One went home, one was transferred to Sioux Falls, and there has been a death.”

“Those numbers just seem to bounce around from one day to the next,” Holland said. “Last week on Friday, we were wondering what we were going to do for the weekend, . . . then they just kind of settled down.. . . Our census was down again early this week and we were down to 15 (total) patients.”

St. Mary’s is the hospital for a large area of central South Dakota for a radius of nearly 100 miles in all directions, according to Holland’s description of the service area that extends to Rosebud, Murdo, Mobridge, Eagle Butte, Philip and Miller.

“I should mention, too,” he said. “All our beds are camera-ed. So if you are in one of our ICU (beds) . . . you have a team in Sioux Falls that helps us along. We have expanded that to eight more beds, with (video) cameras on the end of beds.”

"You can push a button and call up critical care nurses at our e-Helm in Sioux Falls. . . it helps us make decisions.”

It's part of Avera's large telemedicine system that's been said to be the nation's largest, offering medical service 24/7 in real time, at emergency speed if needed, over two-way live video feeds to remote areas even internationally. Even in Pierre.

Mehlhaff said he was interested in how St. Mary’s is doing “contact tracing” when someone is infected with COVID-19 to try and find any other people who might be in danger of having been infected.

“My daughter was among that group,” Mehlhaff told Holland, of the 200 or more students at Riggs High in Pierre found to be in contact with one or more of the several students who tested positive this fall for COVID-19.

Any of the 200-plus were considered to be more likely to be infected because of that relatively close contact.

They all had to be quarantined at home for several days and his daughter, like most of them, ended up testing negative for COVID-19, Mehlhaff said.

“Our community has done a good job and we try to use common sense,” said Dr. Holland, seeming to speak of Pierre and Fort Pierre.

Holland wore a mask throughout his 20-minute talk to the Commission, whose members do not generally wear masks at meetings. He said the hospital requires it of everyone.

“We know if a person is masked and a patient is masked, the risk of transmitting the coronavirus is extremely small," Holland said. "And we know that keeping your distance and washing your hands and wearing a mask when around people (is important) and we have encouraged all our staff to do that.”

Fort Pierre Mayor Gloria Hanson told the Capital Journal during the weekend she has asked Dr. Holland address the Fort Pierre City Council at its next meeting on Monday, Oct. 19.

“We have been busy, seeing patients with COVID-19 infections. The last couple weeks have been quite busy. We are looking at some of those surge plans we were looking at last spring, about, 'how do we handle more patients?.'”