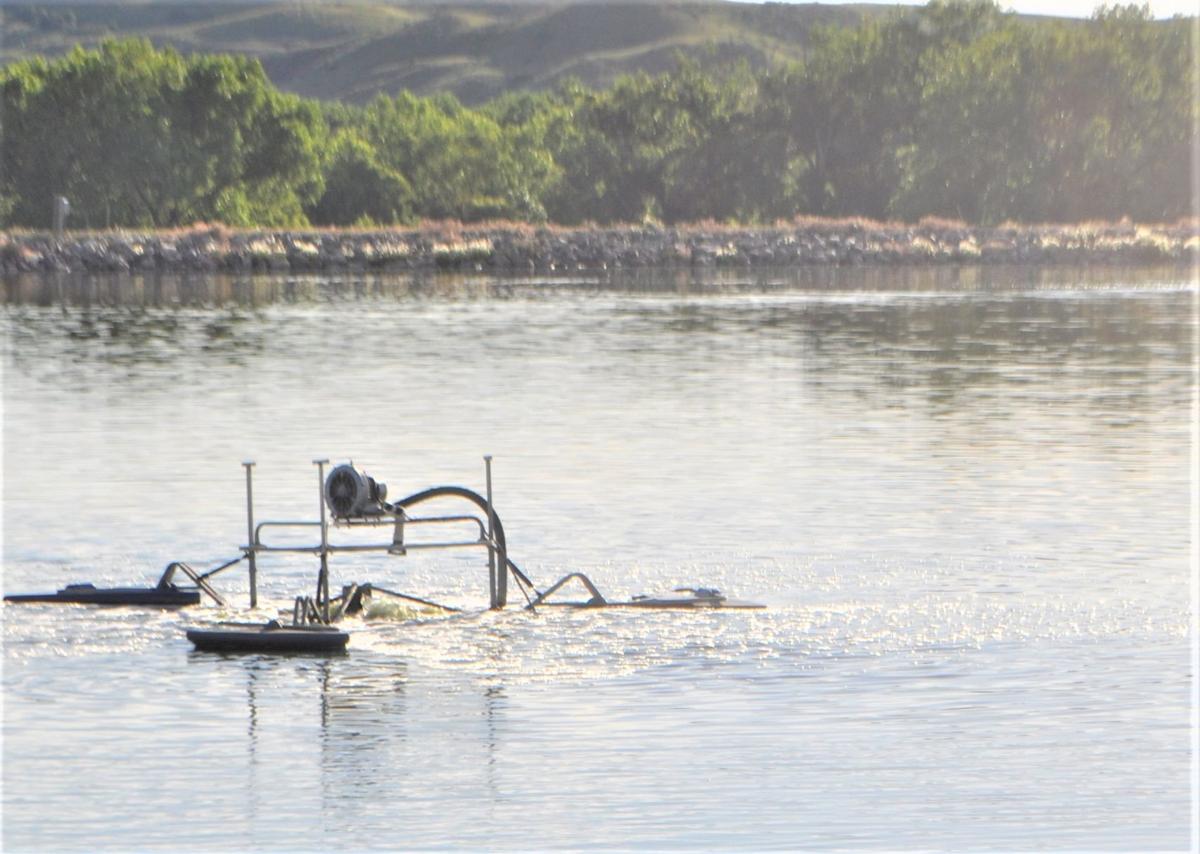 An aerator agitating waste water in one of Fort Pierre's lagoons south of the city on June 25, 2020, the day the city received a $3.7 million loan from the state to improve the waste water treatment system. Ducks, with ducklings trailing behind, cruise the lagoon as do turtles who dive off riprap rocks on the edge into the placid waters.

Part of Pierre's sprawling wastewater treatment plant next to the Oahe Sports Complex of softball fields near the Missouri River, shown on June 25, 2020, the day the state approved a $15.3 million loan to fund the city's improvement project for the plant.

An aerator agitating waste water in one of Fort Pierre's lagoons south of the city on June 25, 2020, the day the city received a $3.7 million loan from the state to improve the waste water treatment system. Ducks, with ducklings trailing behind, cruise the lagoon as do turtles who dive off riprap rocks on the edge into the placid waters.

Part of Pierre's sprawling wastewater treatment plant next to the Oahe Sports Complex of softball fields near the Missouri River, shown on June 25, 2020, the day the state approved a $15.3 million loan to fund the city's improvement project for the plant.

Gov. Kristi Noem on Thursday gave the straight poop on big state loans awarded to the cities of Pierre — $15.3 million — and Fort Pierre — $3.7 million — to rejuvenate their sewage treatment systems.

“The funding will help the city make needed upgrades to its wastewater treatment facility to achieve regulatory compliance and protect the environment,” Noem said twice in twin news releases issued the same minute about each city’s loan.

The money, a mix of state and federal funds, comes from the state’s Clean Water Revolving Loan Fund that provides big bucks at small costs to cities and other local governments to fund big projects that otherwise would be difficult for small cities to pull off, said Rick Hahn, Fort Pierre’s utilities director.

Members of the state Board of Water and Natural Resources met virtually Thursday at great social distances to approve the $3.701 million loan to Fort Pierre and the $15.31 million loan to Pierre.

Besides the two dollar amounts, there are differences between the two loans which will be administered by the state Department of Environment and Natural Resources.

Hahn said Fort Pierre’s leaders took a longer-term loan to keep the increase in estimated cost to the city’s 1,100 residential and commercial waste water treatment customers at about $13 a month versus about $18 a month he estimated it would cost users for the city to repay a 20-year loan.

Fort Pierre uses the most inexpensive method, letting the sun do a lot of the work in a lagoon and aeration system just south of the city that has been around since the 1950s, updated and enlarged several times, the latest time in the 1990s, Hahn said.

Fort Pierre discharges its treated waste water into an unnamed creek that flows into the Bad River about three miles upstream of the river’s mouth at the Missouri River, Hahn said.

This spring the DENR warned Fort Pierre it faced a $52,000 fine for longtime violations of state regulations, mostly for discharging water from lagoons with too much ammonia still in it.

This newly approved loan will be used to fix that problem, forestalling the possible state fine, Hahn said.

He told the Capital Journal via email that the new loan will be used for adding “additional aerators placed the primary treatment lagoons, rerouting flow through the lagoons for improved treatment, installation of an ammonia removal system and UV (ultra-violet light) disinfectant as the final treatment.”

The upgrades will mean it will take less time in the lagoons to get the waste water fit to be discharged, Hahn has said.

Construction on Fort Pierre’s improvements to the lagoons could start later this year, if the design and bids go as planned, Hahn said Thursday. The rehab will make the system work better and be more sustainable, he said. The construction will take about a year to complete, in total, not counting the winter break necessary later this year. Customers won’t notice any interruption in service and the new, improved system could be on line by late 2021.

In Pierre, the new loan will fund improvements that include installation of new grinding equipment, replacing the screen and grit removal systems and new pumps designed to pass solids, Noem announced.

The loans are aimed at covering the total estimated costs of each project.

Hahn said the money is immediately available to the cities but is doled out on a reimbursement process as work is completed to ensure it’s spent on what it’s supposed to be spent on.

Of course, wastewater use involves commercial operations and visitors, so there’s no direct tie of the loans to population.

Fort Pierre’s population this year is 2,138, the U.S. Census Bureau has estimated before completing its official 2020 Census; down 11, or half a percentage point, from the 2019 Census estimate.

Fort Pierre treats about 66 million gallons of waste water a year, from commercial and residential users, according to Hahn’s figures.

Pierre treats about 500 million gallons a year from commercial and residential users.

For what it’s worth, that would mean a per-capita annual average of sewage produced in Fort Pierre is about 30,870 gallons; and about 36,000 gallons on a per-capita basis in Pierre.

The seat of state government rests in Pierre, so maybe that explains some of the difference.

But the mix of commercial waste water produced, based on tourism and businesses, affects the figures.

Fort Pierre Livestock Auction, for example, has 100,000 cattle, more or less, come to town each year, spending a day or two in the extensive pens. The business has its own lagoon to give its waste water some treatment before it goes into the city’s system, Hahn said.