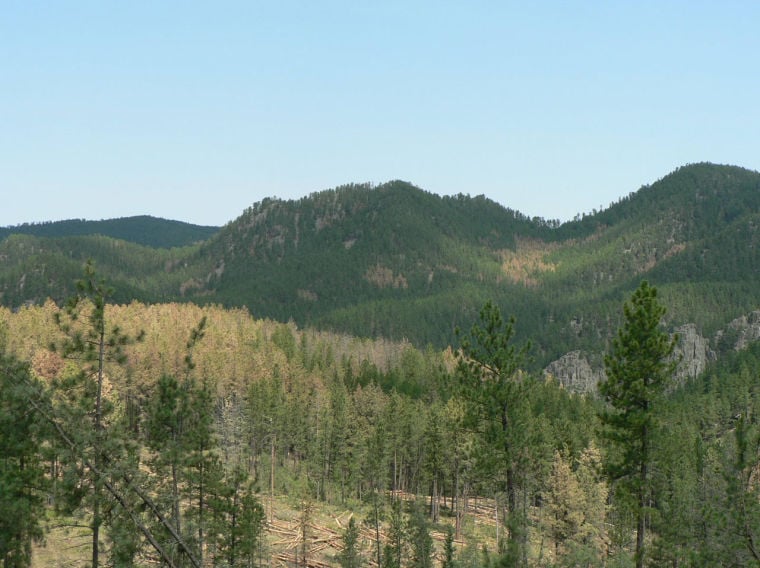 Since 1997, mountain pine beetles have affected trees in more than 430,000 acres of the Black Hills National Forest. 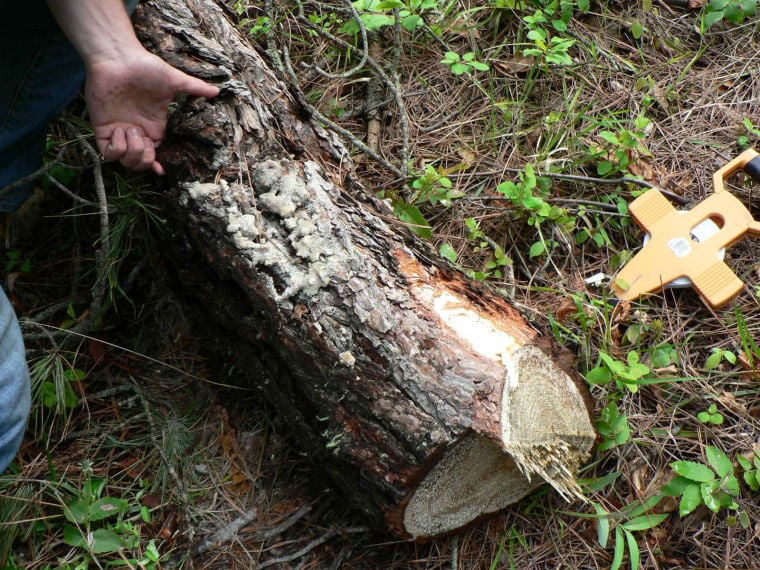 A study found several trees in Lawrence and Meade counties that displayed pitch from a wound, shown here, but were not actually infested with mountain pine beetle. 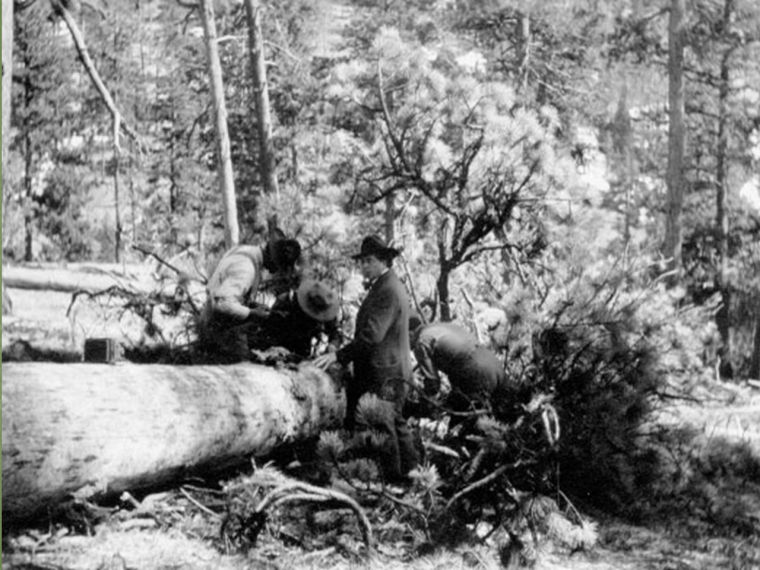 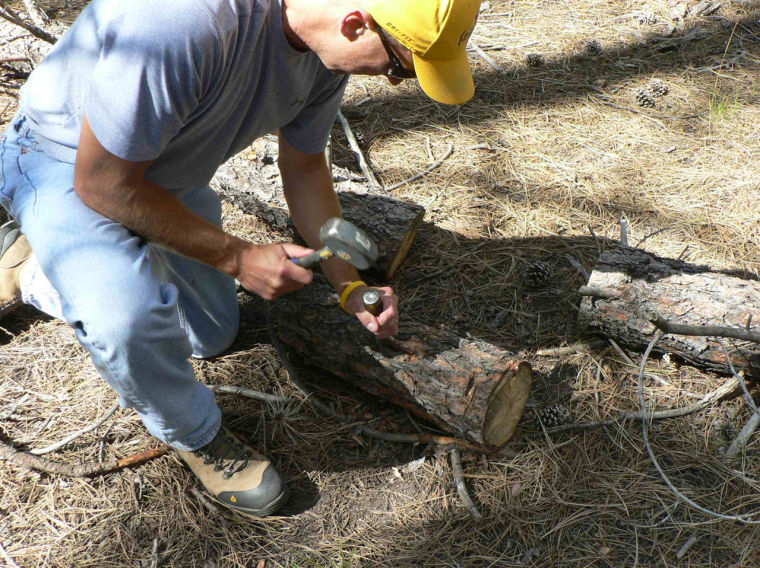 Forest Health Team member Kurt Allen examines a tree in the Black Hills for the presence of mountain pine beetle.

Since 1997, mountain pine beetles have affected trees in more than 430,000 acres of the Black Hills National Forest.

A study found several trees in Lawrence and Meade counties that displayed pitch from a wound, shown here, but were not actually infested with mountain pine beetle.

Forest Health Team member Kurt Allen examines a tree in the Black Hills for the presence of mountain pine beetle.

Reports obtained by the Capital Journal suggest earlier efforts to control mountain pine beetle in the Black Hills may have killed more healthy trees than diseased trees in areas of some counties.

Foresters monitoring the success of the campaign against the beetle tested trees cut in several Black Hills counties and found a wide range in the percentage of infested trees in their sample areas.

“In two counties, Lawrence and Meade, the majority of the trees marked and cut were not infested, meaning within these treated stands the crews caused more tree mortality than the beetles,” said a report obtained by the Capital Journal from the office of the South Dakota state forester.

Sources say that difference in the percentage of infested trees cut in different counties was due to differing definitions of what constitutes a diseased tree, and they caution that their study sampled only a limited number of trees cut.

The U.S. Forest Service had a looser definition of infested trees than the South Dakota Department of Agriculture, sources tell the Capital Journal.

The group did an assessment in May of this year on the effectiveness of fighting mountain pine beetles in Custer State Park, Lawrence, Meade and Pennington counties between October 2012 and March 2013. The study also looked at trees cut in some private lands.

Of the 191 total trees studied by the group in those areas, only 36 percent of trees cut in Lawrence County and 22 percent in Meade County were infested with mountain pine beetles. In comparison the study found that 91 percent of trees cut in Custer State Park were infested, while in Pennington County the figure was 89 percent. Marking and cutting efforts on private land were the most successful, with 93 percent.

From Oct. 1, 2012, to Sept. 30, 2013, Lawrence County cut 48,000 non-commercial trees on Black Hills National Forest land that it had determined were infested, according to figures compiled by the mountain pine beetle working group that developed in 2011 from various local, state and federal agencies. Meade County cut 6,214 trees on federal land while Pennington cut 3,217 during that same period.

Although the results of the study determined significant issues in Lawrence and Meade, Ball said they did not lead the group to any conclusions in regard to the number of total trees cut in each county. Their study was based off a limited sample, he said. “It was more to determine where there were problems or concerns,” he said.

The group’s assessment examined county and state efforts to fight mountain pine beetle through a method known as “cutting and chunking,” a technique used to kill beetles. The technique involves cutting the trunk of a tree into 2-foot sections to determine if it had been attacked by beetles.

According to the study, if employed properly, the cut-and-chunk method would be able to reduce the beetle population by 75 percent. That would be an acceptable level of pine beetles, State Forester Ray Sowers said. The cutting-and-chunking effort “will drop the numbers that survive down to a level where they shouldn’t mass-attack additional trees,” he said.

In order to determine which trees were infested, crews were directed to look for markings including the presence of a pitch tube. A pitch tube is a 1- to 2-inch mass of resin found on a tree trunk where beetle tunneling begins. A tree is able to pitch out the beetles through these tubes if it is healthy, according to the South Dakota Cooperative Extension Service.

The marking of trees in Lawrence and Meade counties based on the presence of a single pitch tube is what accounted for the number of healthy trees cut, the study determined. It noted that infested trees had an average of 15.7 pitch tubes, ranging from five to 62. But in Lawrence and Meade counties, 48 percent of trees determined infested actually had one to three pitch tubes, while 34 percent had no evidence of infestation. The study concluded that although these trees were cut, they were not actually infested with mountain pine beetles.

Ball explained that a pitch tube or a wound on a tree could be caused by other beetles. Turpentine beetles – not mountain pine beetles – were responsible for trees with just one or two pitch tubes, Ball said.

The report concluded that the issue of misidentifying infested trees is due to incorrect marking, not cutting.

Until this year, Lawrence and Meade counties employed marking crews trained by the U.S. Forest Service. Their definition of an infested tree was different from the state’s, according to Lawrence County invasive species manager Dave Heck. “The Forest Service considered any tree with any sign of mountain pine beetles infested,” he explained.

Forest Service Silviculturist Blaine Cook said they considered any tree with one pitch tube to be infested in order to reduce the possibility of future pine beetle attacks. “The district took the position of being aggressive,” said Cook. “We are out to minimize the bug march.”

Based on their agreement with the Forest Service, Heck noted that Lawrence County had a 97 percent rate of successfully marking and cutting trees with blemishes.

Heck said that Lawrence County was obligated to follow the Forest Service definition of an infested tree and not the state’s definition. “Since we weren’t using state dollars and were using county dollars, we had to follow their rules.”

Forest Service officials said their agreement with Lawrence County did not prohibit them from following the state’s definition of an infested tree. “We weren’t restricting their ability to work with the state,” said Northern Hills Regional District supervisory forester Ken Hehr. Following either the state’s definition or the Forest Service’s would be acceptable, Hehr explained.

Yet despite the difference in definitions, in order to receive state funding in 2014, all county marking crews must be trained by the South Dakota Department of Agriculture. Forest Health program specialist Brian Garbisch said the new requirement, which followed the release of the study, was to ensure the accurate identification of infested trees.

That accurate identification includes the presence of five or more pitch tubes, the presence of brown boring dust in bark crevices or any evidence of a woodpecker feeding on the tree.

A new preliminary report released in late November by Allen, Ambourn and Ball found that marking crews in Lawrence and Meade have since improved their accuracy in determining infested trees. Of the 65 trees the new report examined in Lawrence County, 86 percent were accurately marked as infested.

Although that accuracy in Lawrence County has gotten better, the new report said the county still needed to continue improving its efforts. “Lawrence County crews have also had a substantial improvement over their marking efforts from last year; however, they need to improve their ability to identify infested trees,” the report said. It further noted that Lawrence County did not identify 15 percent of trees that the recent study later determined were actually infested.

Since the current mountain pine beetle epidemic began in 1997, trees on more than 430,000 acres of the Black Hills National Forest have been affected, experts said.

A look at the past, present and future of tree epidemics in South Dakota

Will there be any investigation of the tax dollars wasted in Lawrence and Meade County?

The Capital Journal is continuing to look at the role that tax dollars played in both Meade and Lawrence counties. I am unaware of any other type of investigation.