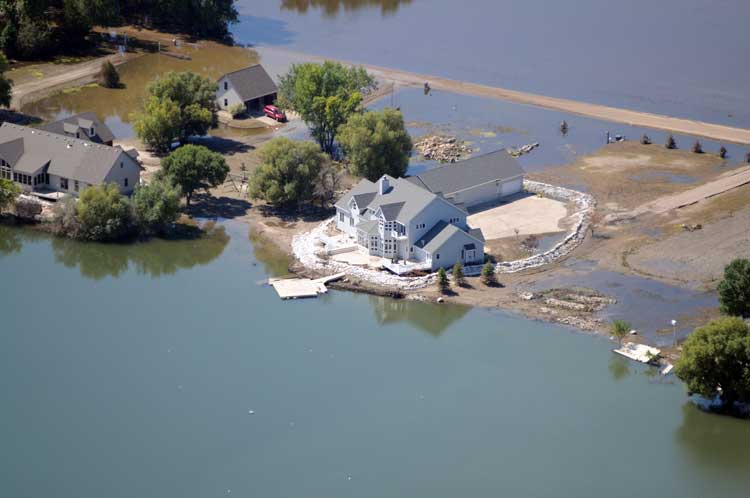 At the Missouri River's highest, the houses on Frontier Road were only accessible by boat. Although the road can't handle vehicles, residents can now get to their homes using ATVs. The photo shows the river with releases out of the Oahe Dam at 80,000 cubic feet per second. Chris Mangan | Capital Journal 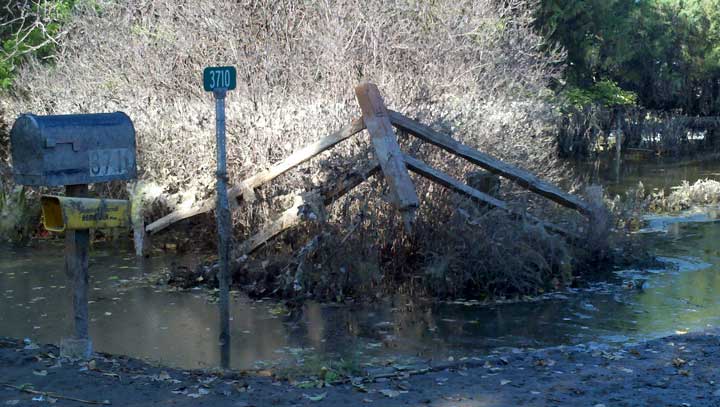 As the water has receded on Frontier Road, silt and dirt coat trees, mailboxes and other items that were underwater from about two months. Until last week, the neighborhood was only accessible by boat. Courtesy photo

At the Missouri River's highest, the houses on Frontier Road were only accessible by boat. Although the road can't handle vehicles, residents can now get to their homes using ATVs. The photo shows the river with releases out of the Oahe Dam at 80,000 cubic feet per second. Chris Mangan | Capital Journal

As the water has receded on Frontier Road, silt and dirt coat trees, mailboxes and other items that were underwater from about two months. Until last week, the neighborhood was only accessible by boat. Courtesy photo

Editor's note: This is the second in a two-part series that revisits displaced residents who were featured in the Capital Journal earlier this summer. The Capital Journal published a story about Dr. Rob Allison, who lives in on Frontier Road, June 27.

PIERRE - Rob Allison doesn't need a boat to get to his home anymore.

The water has receded enough that Frontier Road is actually a road again. But it's only been a week since the gravel pathway has been accessible and it is still too soft for vehicles. So residents like Allison use ATVs to get in and out of their neighborhoods.

During the Missouri River flood, Frontier Road, a few miles south of the Oahe Dam, was one of the residential areas impacted the most, with water inundating 20 of the neighborhood's 25 homes. Very few of the residents have moved back home - about 75 percent of homes now have electricity, Allison said - and some are still unsure if they will ever be able to live under those roofs again. Allison is one of the five that stayed dry. One of the lucky ones, he said.

Water is still gathered in the ditch alongside the road, but most houses are no longer surrounded by it. At one point, shallow bottom boats traveled over the top of mailboxes to view the homes. While the water has receded, residents are still bitter that the U.S. Army Corps of Engineers kept raising the release rates, overpowering the berms they built to protect their homes.

At 80,000, the Missouri River is mostly in its banks, but "still higher than a high, normal summer day," said Phil Meyer, another Frontier Road resident whose home was not inundated.

The river comes up to the top Allison's retaining wall in his backyard, which is five feet high. At its highest, the river crept within a foot of the top of Allison's sandbag berm. Pumps working constantly protected the home from rising groundwater. He did have water in his garage and crawl space, but both are now dry. The flood protection surrounding his 3-year-old home still stands and will until the roads are durable enough to handle trucks with heavy loads coming in and out.

In the meantime, he is trying figure out what needs to be done in order to go home again, a process for which there is no precedent. On Tuesday, the contractor who built his home inspected the house and brought a soils and structural engineer. Allison is also gathering estimates from cleaning companies, again without really knowing what services he needs to make his home livable and mold free.

Allison hopes to be back into his home by the middle or end of October. Much of the work that needs to be done, besides making sure there is no mold and the structural integrity is sound, is putting his home back together; doors, faucets, toilets, cabinets and heating and cooling units were all removed prior to the flood. On the inside, it barely looks like the structure beat back the ravages of a flood.

"If you didn't know, you'd think we were just building a house," he said.

The big trees in his backyard are questions marks. He isn't sure if they'll make it, but plans to wait until next spring to determine their fate.

With preparation and cleanup costs, Allison estimates the entire flood will cost him $50,000 and he doesn't have much hope that he'll receive assistance from the Federal Emergency Management Agency.

"How does it work when someone floods your house?" he said. "Personally, I would love to be made whole and reassured that this will never happen again. I think that's reasonable."

The water's wrath is noticeable in almost every inch of the Frontier Road development, which just a few weeks ago was nearly entirely underwater and only accessible by boat. Because of the soft roads, the area is still closed to anyone but residents. Many of the homes bear a brown water line, a reminder of what occurred this summer. Shrubs still line the road, and a soccer goal in a field near a few homes looks like it was dressed in mud and dead leaves as a prop for a horror film. But, if one looks closely, the area still resembles the pleasant neighborhood that once existed.

That nice neighborhood, the one with a beautiful river view and pelicans for neighbors, is what Allison longs for. To him, that idea is not lost.

"I want my neighborhood back," he said. "At least for the middle of my life, I want to live here.

"I am not asking for a handout. I was wronged but that could be righted."