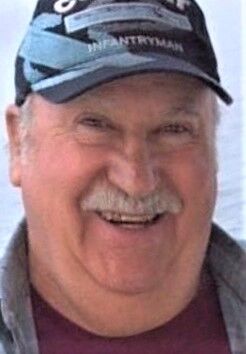 Riley worked with his family to make the family farm productive. Riley could do any job he put his hand to and ‘fixing things’ came naturally to him. Riley was a true cowboy at heart and loved helping everyone from fixing a tractor at harvest to helping brand.

Riley attended and graduated from the University of Nebraska School of Agriculture in Curtis, NE, in 1968. He was active in many school activities and excelled on the basketball court.

After high school Riley came home to work with his Dad on the farm and did so until Uncle Sam called. Riley served in the U.S. Army 11th Infantry during the Vietnam war, the “Wandering 11th.” Riley was proud of his service to his country. His army buddies meant the world to him and he loved attending the annual reunions.

In 1971 Riley received a medical discharge for the wounds he received in Vietnam and returned to working the farm with his Dad. In 1972 he married Marcia Jo Kratovil. Riley was a proud father to his three daughters: Rebecka Marie in 1975, Amy Elizabeth in 1977, and Jessica Jo in 1980.

Riley attended several Aviation technological colleges throughout the U.S. to obtain the required certifications for his career in Aviation. Riley worked as an aviation mechanic in Montana, Texas, Minnesota and South Dakota. After obtaining the required certifications, Riley became a Federal Aviation Administration Inspector and retired with the FAA in 2008. One of Riley’s proudest moments is when he obtained his pilot’s license and his first bomber leather jacket to celebrate the occasion.

Riley could start up a conversation with just about anyone and within moments of talking to you, he could identify what area of the country you lived based on your “accent.” He had a story to share for any situation and whether you heard the story once or a million times, he told it as if it was the first time every time.

Riley’s favorite pastimes were Nebraska Cornhusker football, fishing ,and hunting. Riley loved taking people hunting and fishing with him and he made many friends along the way, who became lifetime buddies. For years he had applied for a SD elk license and was over the moon that he had drawn an elk license this year.

From waffles to homemade noodles, Riley could cook like no other. He could make a pot of soup and share with everyone that was better than anything you could find in a high-end restaurant. Riley was always the happiest surrounded by friends and family over a meal.

Riley was preceded in death by his parents: Eddie and Charlotte Wallingford; his sister Pearle Markel, and his brother Roger Wallingford.

In lieu of flowers, the family requests that donations be made to the New American Legion in Martin, South Dakota or to the Tuthill Cemetery Association.

A Memorial service to celebrate Riley’s life will be held at the Tuthill Cemetery, Tuthill, SD, on Monday, August 3, 2020 at 10:00 a.m. with a lunch following at the New American Legion in Martin, SD.

Bennett County Funeral Services of Martin, SD are in charge of the funeral arrangements. https://www.chamberlainchapel.com/obituary/Riley-Wallingford.