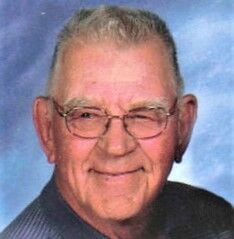 Visitation will be on Sunday, May 16th, at Isburg Funeral Chapel from 5:00 – 7:00 p.m. Masonic Rites will begin at 5:30 p.m. and a time of sharing will follow. Funeral services will be at 10:00 a.m. on Monday, May 17th, at Lutheran Memorial Church in Pierre. Burial will follow at Scotty Philip Cemetery with full military honors. For those unable to attend the funeral, it will be available for viewing at www.isburgfuneralchapels.com at the top of Marvin’s obituary page.

Marvin was born to Lauritz and Laura (Abbott) Olson on January 12, 1927, at home in Sansarc in Stanley County. Marvin served in WW II as an automotive mechanic. He later married Marge Warnka in Dallas, TX, on November 28, 1948. Together they farmed and ranched in Stanley and Haakon Counties until retiring in 1990. They lived in numerous places over the years: Hayes, Pierre & Ft. Pierre, SD, and Apache Junction, AZ.

Marvin was active with many community projects and organizations over the years including Deep Creek Lutheran Church, Hiram Lodge #123 A.F. & A.M., Fort Pierre #90 Order of Eastern Star, and Naja Shrine Temple and Shriners Club in Pierre/Fort Pierre. He was the Naja Temple Potentate in 1990 and held the highest honor of being the oldest living Potentate until his death. He was also one of the founding directors of the American State Bank. In the Army, he was stationed in Korea towards the end of World War II. He loved to golf and spend time and entertain his family, especially his grandchildren, his many friends. He will be deeply missed by all who knew and loved him.

To plant a tree in memory of Marvin Olson as a living tribute, please visit Tribute Store.