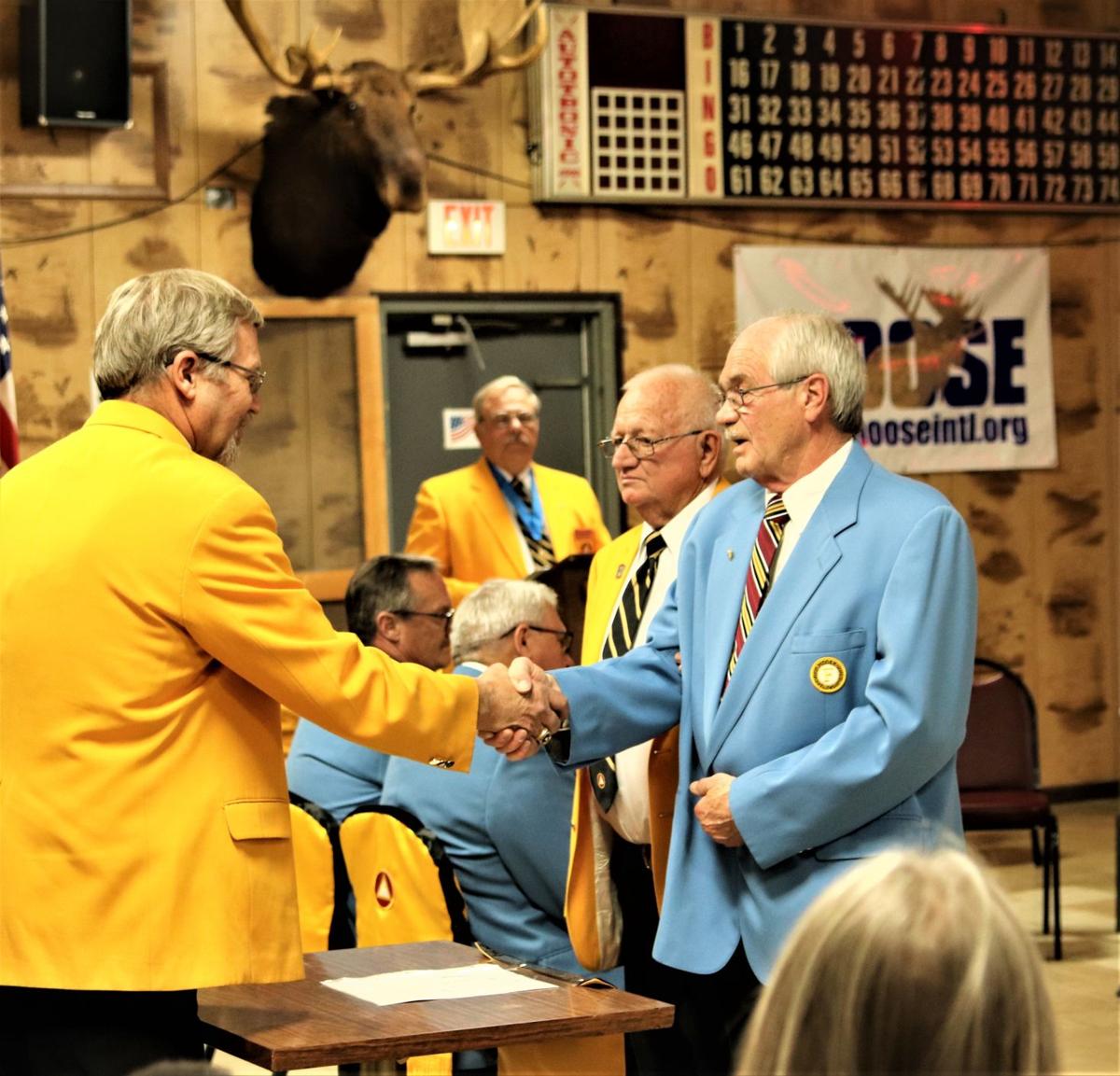 At one of the official stations, Stephen Pietrus, far right, shakes hands with fellow Moose members. Pietrus wore his light blue Fellowship jacket for the last time. Now he wears the Pilgrim Gold. 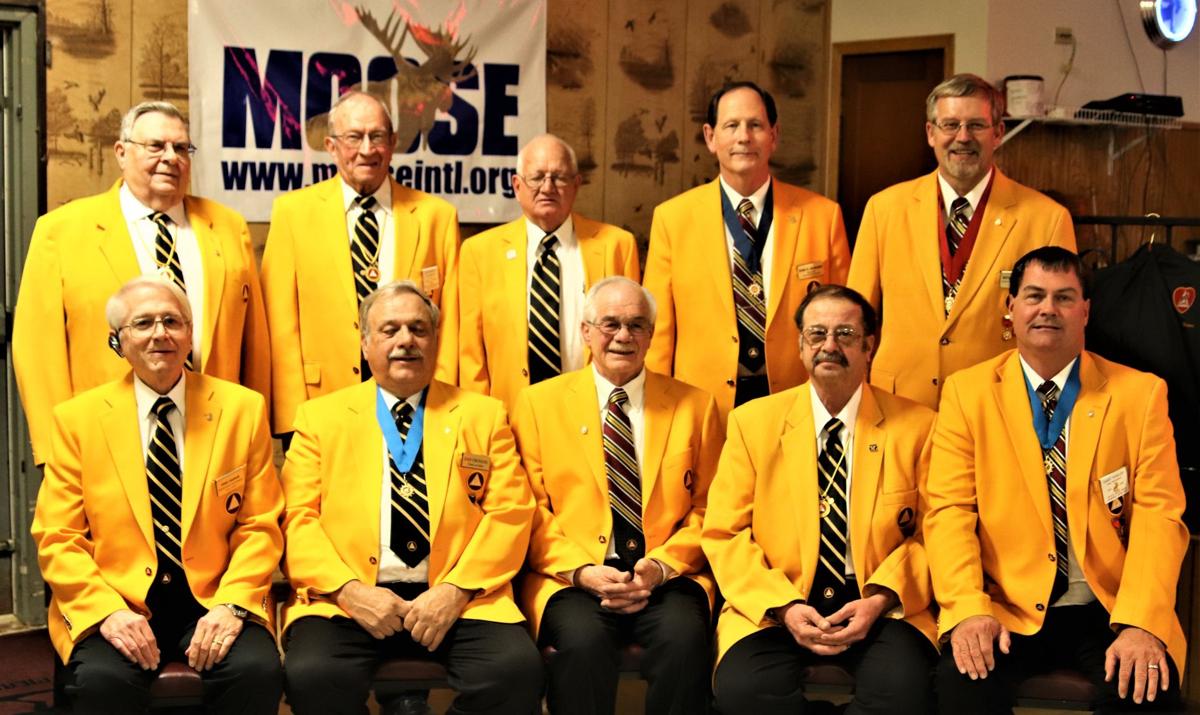 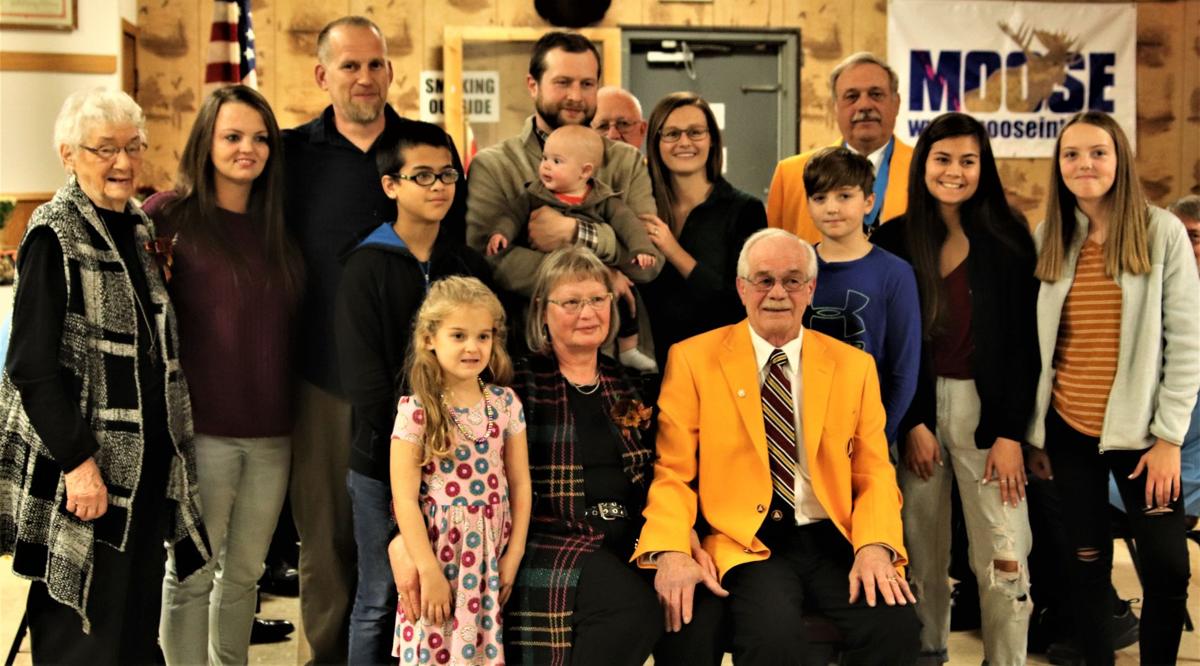 After being officially recognized as a Pilgrim level Moose by fellow members, Stephan Pietrus poses with family at the end of the open meeting at Fort Pierre Moose Lodge 1813.

At one of the official stations, Stephen Pietrus, far right, shakes hands with fellow Moose members. Pietrus wore his light blue Fellowship jacket for the last time. Now he wears the Pilgrim Gold.

After being officially recognized as a Pilgrim level Moose by fellow members, Stephan Pietrus poses with family at the end of the open meeting at Fort Pierre Moose Lodge 1813.

In a special ceremony Nov. 23 at the Fort Pierre Lodge 1813, Stephen Pietrus was recognized in front of fellow Moose members, and other friends, family and guests, for having achieved the highest rank in the Loyal Order of Moose.

Including Pietrus, there are only 18 Pilgrim Degree of Merit holders — those honored to wear the Gold Jacket rather than the Fellowship’s Blue Jacket — in the Dakota Moose Association. The Association includes all of South Dakota and North Dakota. World-wide, there can not be more than 3,000 Moose members holding this highest of distinctions.

The last time anyone from the Fort Pierre lodge achieved the Pilgrim status was 25 years ago, when Ed Ackerman earned his Gold.

In a formal pomp-and-circumstance ritual, Pietrus was escorted through stations — the main one having the opened Bible as its center — where vows and accolades were bestowed. Moose members — men and women — from across both states were in attendance.

The Fort Pierre Lodge 1813 began around 1947, and currently has approximately 230 registered members. The other South Dakota lodges in the region’s association are Aberdeen, Mitchell, Mobridge, Rapid City and Belle Fourche. The North Dakota lodges are Mandan, Williston, Minot, Bismarck and Crosby. Attending the Fort Pierre ceremony was Moose International Representative, Greg Hanson, who lives in Sioux Falls and is a member of the Mitchell lodge.

Pietrus joined the Loyal Order of Moose, Lodge 1813 in Fort Pierre, in 2002. He immediately began serving as an administrator. He quickly moved up from the Legionnaire’s Maroon Jacket to the Fellow’s light Blue Jacket. Now he wears the Pilgrim’s Gold. Since 2002, he has been a lodge officer in one capacity or another for all but six months. During these years, Pietrus changed the manual ledger record-keeping process over to the computer application that is still being used today. He received his Fellowship Degree of Merit in 2008. His accolades — stretching out over the years and growing in status — were recited during the ceremony.

The generalized comment, “One heck of a dedicated individual,” said by Don Pesicka, current lodge governor, was probably the most all-encompassing praise.

Some aspects of the benevolent Moose were referred to during this open meeting. One is a member pledges that never should another Moose or their family suffer loss. A Moose should never falter in humanitarian principle. They show mercy toward the sick, work toward charitable causes, and personify unselfish deeds. A Pilgrim is a source for new and added strength for other Moose and for the lodge itself.

Pietrus summarized years of Moose principals. “Family comes first. Don’t complain about something; just do something to get it right or get it done. Show care to all, especially to children and seniors,” said Pietrus. He was the man of the hour, with all there to honor him, yet he thanked them for his achieving this top honor.